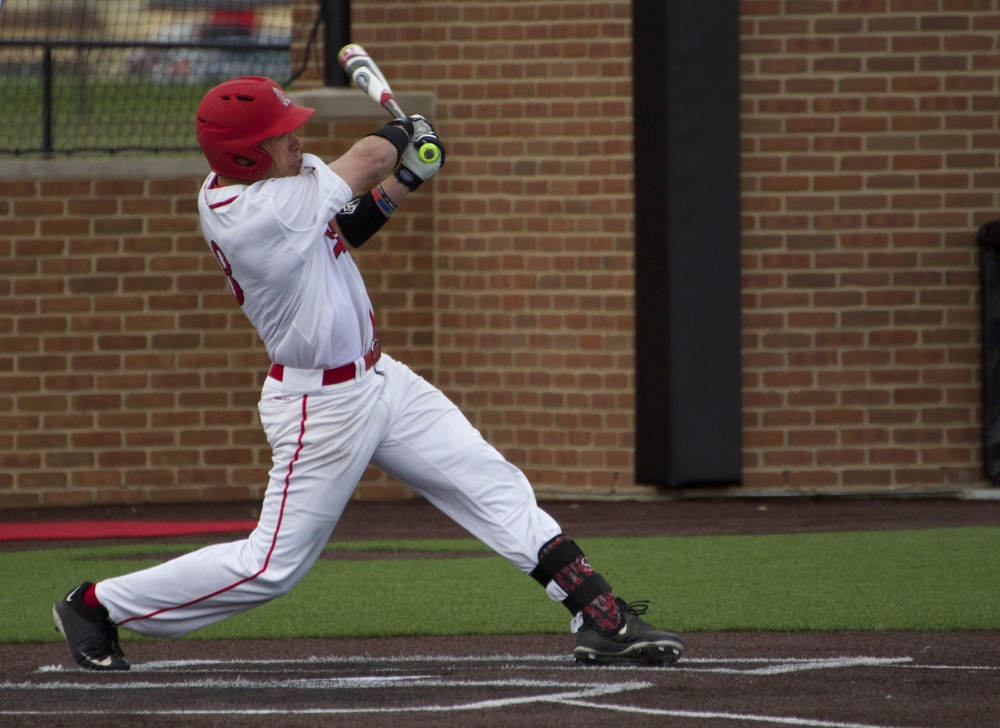 Alex Call, a junior outfielder for the Ball State Cardinals, attempts to hit the ball in the game on April 1 against Ohio. DN PHOTO GRACE RAMEY

Playing in the prestigious Cape Cod Baseball League last summer, he said, helped him step up his game.

“I’ve learned a lot this summer, and I’ve had great guidance during my career here,” he said. “I’ve just been able to put it all together. To see the ball, that’s what it all comes down to, and being slow and early, and being in ‘yes mode.’”

Call has since not been held hitless after going 0-3 at No. 15 Louisiana State University on March 12. In the last 14 games, Call has recorded 29 hits with a .483 batting average.

Overall, Call currently leads the Mid-American Conference with a .420 batting average and was named MAC West Division Player of the Week.

His multi-hit game April 5 also made him the first hitter in the MAC to reach 50 hits this season.

Call has also scored a MAC-best 35 runs this season. In every game this season, he has hit one or two spots in front of junior first baseman Caleb Stayton, who leads the MAC with 37 RBIs. Stayton said patience is the key to driving in runs.

“When I go up there, I have a pitch in mind that I’m looking for — something that I can drive through the gaps,” he said. “If it’s not two strikes, I’m not swinging at anything that’s not one of those pitches. If I stay patient, I’ll get a good pitch.”

As a team, Ball State is hitting .295 with a .389 on-base percentage and a .452 slugging percentage. Stayton said the overall performance has been a larger part of the Cardinals’ success.

“I think it takes all nine guys, it doesn’t take just three,” Stayton said. “Every guy’s going up there with a job. Luckily, ... I was going up there and there were guys in front of me getting on base, so I knew what I needed to do to drive them in. Everybody goes up with a plan in mind, and they’ve got to move the baseball.”

Call, Stayton and the rest of the Cardinals will look to continue their success going into their home series against MAC opponent Western Michigan (8-17, 1-2 MAC). The series begins at 3 p.m. April 8 at Ball Diamond at First Merchants Ballpark Complex.

By Zach Carter / 6 hours ago

By Richard Kann / 17 hours ago