Turok and Turok 2 to see rerelease 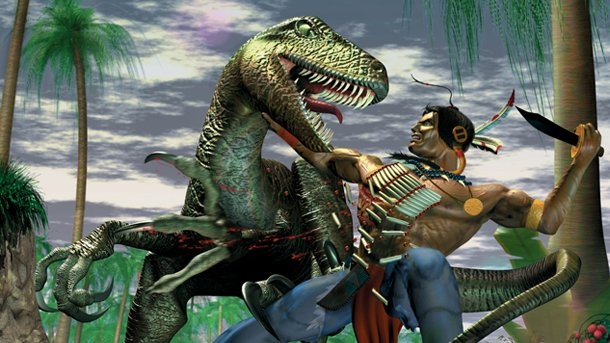 Night Dive Studios announced on August 26 that they will be releasing remastered versions of Acclaim's classic  Turok: Dinosaur Hunter and Turok 2: Seeds of Evil. The development company specializes in restoring older games for a modern audience, its first game being a remaster of System Shock 2.

Turok: Dinosaur Hunter, first released for the Nintendo 64 in 1997, is a first-person action game. Players assume the role of Tal'Set, a time-traveling warrior who is tasked with protecting the barrier between Earth and the Lost Lands, a realm unaffected by time.

The game's antagonist, the Campaigner, wishes to plunge these two universes into chaos in the hopes of taking them over. To prevent such events from happening, Tal'Set must explore these hostile Lost Lands to find an ancient artifact. Players will use various weaponry, ranging from knives and bows to futurist firearms, to defend themselves from the dangerous creatures that live there; namely, Dinosaurs.

Both of the remastered versions will be receiving graphical updates, as well as minor fixes to both gameplay and level design. At this time, there is no estimated release date, but it will be launching on PC.