When President Jo Ann Gora took a large drink of water following her presentation to the Board of Trustees on Friday night, the board president knew a long speech was coming.

Gora then walked to Hollis Hughes and handed him her letter of resignation.

Retiring at the end of June 2014 is the right time for her, she said, regardless of the fact that her contract lasts through the 2016-17 academic year.

“It is the relentless pace of these kind of jobs that makes them exhausting, really,” Gora said. “And so at some point you say, ‘Okay, I need some space in my life.’ I feel that I need more space in my life right now.”

She said she hasn’t given much thought beyond the next eight months, but she and her husband, Roy Budd, own a home in Williamsburg, Va., about three miles from their grandchildren.

“It would be nice to actually live in the house,” Gora said. “So, we will probably take up residence in Virginia.”

Hughes said this is a good time professionally for Gora to leave as “everything is in wonderful shape.”

The Education Redefined 2.0 strategic plan is set through 2017, the second phase of the geothermal project is underway, a campus-wide physical master plan is in the works and Gora expects the university’s 10-year accreditation report from the Higher Learning Commission to be positive.

“As my husband likes to say, ‘it’s better to leave one year early than one day late,’” Gora said. “Hopefully, I am leaving early and not late.” 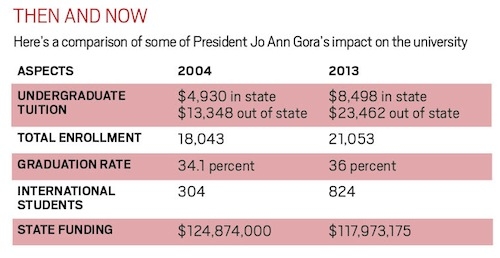 Hughes said they are not looking for short-term leadership and are hoping to find a candidate without needing an interim president. He said he hopes to have a candidate by Fall Semester 2014.

The process for rehiring is still in its beginning phases. He said they are looking for a searching firm to begin gathering potential applicants.

Hughes said the process will most likely be private, as it was when Gora was hired in 2004. That was the first time the board did not introduce the applicants to anyone on campus, but used a search firm and committee to select the president.

“Just about every one of the finalists were sitting chancellors or presidents,” Gora said. “So that leads to a closed search. …

“In the end, you want the best candidate pool possible, and a closed search is ultimately the best way to get that. In the end, it is the Board of Trustees who select the president, so their opinion is what matters.”

Hughes said they will discuss the situation more during the December meeting.

Gora said when she first arrived at Ball State in 2004, the relationship between the university and community was strained.

“I remember people saying ‘Oh, there is town and gown issues. There isn’t a good relationship,’” she said. “And I saw a lot of individual acts by individual people and I thought, ‘Well, that’s interesting.’”

She said she made it her goal to speed up, emphasize and build that relationship, partially through collaboration with immersive learning.

“I am incredibly proud on our emphasis on immersive learning and the distinctiveness of a Ball State education,” Gora said. “I think this will carry the university forward.”

She said she hopes redefining education is her legacy that continues to be carried out at Ball State.

“It’s really hard to celebrate when you are saying goodbye to someone … who has provided such outstanding leadership,” Hughes said. “I am pleased to have been a part of the original search team who had the foresight to bring this treasure to Ball State.”

[View the story “Tweets from press conference with Gora” on Storify]

By Morgan Taylor / 11 hours ago

By Vanessa Tosino / 14 hours ago

Local Muncie owner of the Chameleon College of Beauty School, Krista Sides, has been working in hair salons ever since she was 14 years old. With so much experience under her belt, she devoted her time and effort to give back to the Muncie community and make connections with other local businesses.

By Taylor Smith / 19 hours ago