by Conner Tighe The opinions and views expressed in this article are those of the author and do not reflect the opinion of Byte or Byte’s editorial board. In the city of Cartagena, Columbia, Nathan Drake -just kicked out of a museum for attempted theft- scours the city searching for another way in. An older gentleman spots the boy—witnessing his talents for thieving. Fast forward at least a decade, and the two are scouring the Rub’ al Khali desert, jungles of Borneo, and more. Uncharted’s heartfelt and thrilling journey began in 2007 and continues to capture movie-like escapades over a decade later. With three releases on the PlayStation 3 and three on the PlayStation 4 (including The Nathan Drake Collection), there’s more to return to even after several playthroughs. Here are the Uncharted installments ranked.

[caption id="" align="alignright" width="282"] Image from DeviantArt[/caption] Drake finds himself in a serious pickle when a simple thief job goes wrong. Uncharted 2 expanded upon our wildest imaginations when Drake travels to Asia to seek Shambhala while on the run from the psychotic war criminal, Zoran Lazarević, who is also seeking the ancient city. Drake’s longtime mentor and friend, Victor Sullivan, returns but is MIA in most of the game, unlike the prequel. Journalist Elena Fisher returns in the sequel running into Drake by chance in Nepal. Introduced to this action-packed sequel is treasure hunter Chloe Frazer. The three intermingle in a comedic love triangle throughout the game. The game improved its wonky combat system introducing more gun selection, combo selection, and a “very easy” difficulty level, which allows players to enjoy the ride rather than worry about dying over and over. The locations players explore, including Nepal, Tibet, Borneo, and the Himalayas, are breathtaking in their graphics, even 11 years later. Uncharted 2 is by far Drake’s most exciting adventure and includes his most formidable foe to date.

Although as fun as it was, Uncharted's fourth installment didn’t live up to the hype. Overall, the game is excellent as all games in the series are, but I couldn’t ignore plot pieces that seemed thrown in to create or solidify an ending to Drake’s adventures; like Nadine Ross and her military group Shoreline as well as adding Drake’s long-lost brother, Sam, who was never mentioned in previous installments. [caption id="" align="alignright" width="268"] 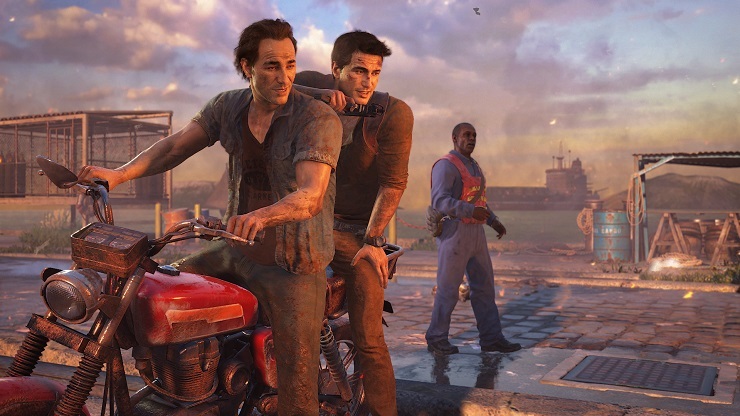 Image from PCMag[/caption] Now working as a diver in New Orleans for a salvaging company, Drake longs for adventure as his life has slowed down. Like Drake’s luck, trouble always seems to find him when Sam shows up years after believing to be dead after a prison breakout. The brothers travel in search of Henry Avery’s treasure, one of the most notorious pirates of his time, to pay off Sam’s debt to drug lord Hector Alcazar. Sam’s reasoning is later revealed to be a myth. The combat, graphics, and overall gaming mechanics with jumping, swinging on ropes, and climbing walls were at their peak in this fourth installment. Drake’s family and childhood were not explored as much until this title, so the aftereffect feeling isn’t as powerful when it's delivered here. There are more treasures to collect in Uncharted 4 than all the other titles, and it’s a semi-open world allowing players to remain in one level but with the ability to explore vast amounts of it, collecting treasures and stirring conversation with characters about the environment. The levels are mostly explorable for players to scale walls and drive around in a jeep. Image from DarkStation[/caption] All the adventure began when Drake and Sullivan stumbled upon a German U-boat in the Amazon, trapped in the jungle. As the search for El-Dorado steers this fun-filled story, the mechanics, like shooting enemies and jumping across cliffs, can create intense agitation as players will find themselves falling to their deaths several times. Drake will grab ledges most of the time, but don’t count on it. This seemingly small issue becomes increasingly more annoying as the game progresses. However, don’t let that steer you away from a fantastic story. Fisher and Drake travel to a mysterious island searching for gold and discovers a curse that inhabits the Spanish colonists who invaded the island centuries earlier. The score, done by Greg Edmonson, is incredible standing in memorability with John Williams’ Indiana Jones score and was expanded upon in later titles. As Sullivan, Fisher, and Drake sail into the sunset, players will find the adventure has only just begun.

Image from Eurogamer[/caption] Drake’s third adventure takes players to the Middle East in search of the lost city, Iram of the Pillars. Katherine Marlowe, an old flame and former employer of Sullivan’s, also seeks the lost city competing and butting heads at times. Although the locations and overall story were a bit drab, the villain organization was its most interesting point. There’s a connection between history and the present day with Marlowe and her group of mercenaries representing a secret society Sir Francis Drake was a part of when Queen Elizabeth I sent Drake to find the city. The villain shows how far a group is willing to go to obtain an artifact sought after for centuries using a specialized drug on victims to obtain information and bend their will. Familiar faces Fisher, Frazier, and Sullivan return, and players are introduced to new ally Charlie Cutter. The game emphasized the combat system to the point where, at times, players had no choice but to fight hand-to-hand with their enemies. The game's beginning has players engage with enemies in a London bar crashing through windows, using bottles, pool sticks, and chairs to knock out foes. All the usual gun fighting and exploring are back in the third entry.

Image from PlayStation[/caption] Taking away the focus on Drake, Uncharted: The Lost Legacy features Frazier, back after last appearing in Uncharted 3, and Nadine Ross, who was one of the antagonists of Uncharted 4. Players will scour the jungles and ancient temples of India in search of the Tusk of Ganesh. The two women, along with Sam who doesn’t show up until toward the end, race to find the Tusk before Indian insurgency leader Asav finds it first. Keeping its consistency, all of the recognizable gun fighting and taking cover from enemy fire returns to this installment. One of the differences the game has is the introduction of only a handful of levels. Each level has several tasks and is an open world that allows players to explore their heart’s content. I wasn’t a fan of the makeup, but the game delivered amazingly. Frazier and Ross’ backgrounds are explored more as they were merely side characters in the previous installments. According to Happy Gamer, there’s been talk for the Uncharted franchise to continue with the next release this year on the PS5. Sources: Entertainment Weekly, Happy Gamer, IMDB, Push Sqaure, Uncharted Wiki Images: DarkStation, DeviantArt, Eurogamer, PCMag, PlayStation  Featured Image: The New York Times