An Inside Glimpse at BTS' Virtual Concert - 'Map of the Soul ON:E'

by Annie Bastian Nothing beats sitting in a stadium seat and hearing the roar of the crowd, as the floor nearly shakes from the endless stream of fans screaming, cheering, and singing along to their favorite artist. Before 2020, going to concerts was something that countless people across the globe would plan weeks in advance to attend. But as COVID-19 has brought the ability to attend in-person concerts to a halt, the music industry has had to get creative to still connect with their audiences. To overcome this obstacle, many artists have taken to performing live stream concerts online. Recently, South Korean Male Group, BTS, hosted their “Map of the Soul ON:E” shows, which consisted of two pay-per-view online concerts that were live-streamed on back-to-back days. Not Their First Rodeo [caption id="" align="alignright" width="376"] 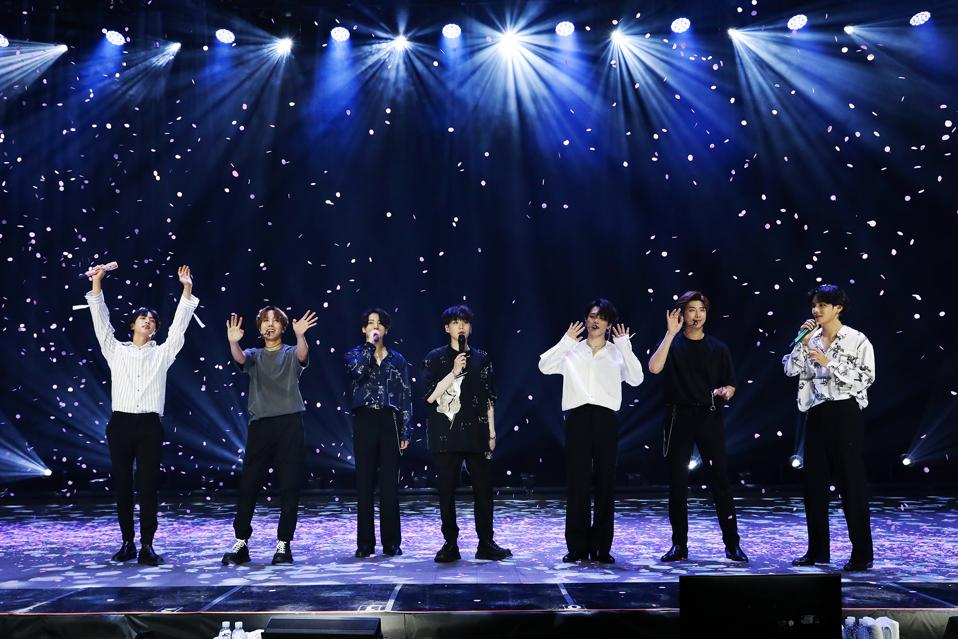 Image from Forbes[/caption] Before the “Map of the Soul ON:E” concert was broadcasted, BTS was a group that already had experience connecting with their fans through the internet. The international boy group had been planning their Map of the Soul world tour that was scheduled to begin in April 2020. As COVID-19 began shutting down international travel, the group, like many other artists at the time, had no choice but to delay their tour. Instead, the group had a 2 night back-to-back free concert weekend where past concerts from their old tours were streamed online for fans to see. This streaming event, called “Bang Bang Con”, consisted of nearly 24 hours worth of concert content in the span of two nights, or days depending on the time zone. After this streaming event, there was also a “Bang Bang Con: The Live” concert which was a pay-per-view concert shown in June. “Bang Bang Con: The Live” set a Guinness World Record for the most viewers for a music concert live stream with 756,000 paid viewers from over 100 countries. As the pandemic dragged on, BTS released the official announcement that they would be having another online concert: “Map of the Soul ON:E”. Originally, there was supposed to be a live component of the concert in Seoul, South Korea but it was canceled once again due to COVID-19 which left the entire event online. The Experience Going into this experience, I was a little hesitant. When concerts were in person, people knew what they were signing up for, and more or less could expect the quality of the performance they were paying for. So as a fan, it was hard to decide whether attending an online concert is worth the money. I have streamed two different free concerts since the beginning of the pandemic just for fun, but have yet to spend money to watch one. As someone who has seen BTS both in an in-person concert and in online concert streams, I had high expectations for the experience. To see for myself, I bought the $45 ticket and woke up bright and early Saturday morning at 6 am to watch BTS’s “Map of the Soul ON:E” day one concert. Two and a half hours of BTS performance later, I closed my computer quite impressed. When I say BTS spared no expense, I mean there was a full-blown carousel on stage for one performance. BTS went above and beyond to make their virtual concert an experience that their fans could enjoy and remember. [caption id="" align="alignleft" width="373"] Image from NBC News[/caption] As a fan, it was hard getting into the experience without being in a stadium, but the technology and set pieces that were presented took the viewer to what felt like a different dimension. It was a very different experience without other people. It almost felt like I zoned into my own world watching the performances. Was the concert the exact same as an in-person one? Absolutely not. If it was, the production companies would be charging you a lot more. But as a fan of the group, I would say that it was a worthy experience. The concert was formatted exactly as an in-person concert: the intense dances, outfit changes, and breaks for the artists to talk to the viewers. The only difference was you weren’t actually in the same room. Online concerts take away the feeling of community that comes with being in a stadium filled with other fans, but it still allows the artists to be in touch with the audience. BTS live-streamed some of their fans into the concert venue on screens around the room to fill in for the audience during the concert as well. During the ending song, there were cubes suspended around the room with live videos of fans broadcasted on them. It made for a very whimsically surreal experience as a fan, and I applaud BTS’s team for thinking of such amazing ideas to incorporate fans even though we are in a pandemic. It was also a multi-view stream, so fans were getting not just one view, but six they could choose from to watch. This, along with the rebroadcasting of the performance later that evening, at 10 pm, for those wanting to watch the concert again or who missed it the first time, made the concert worth its money for me. The Takeaway I don’t believe online concerts will ever be as good as an in-person concert, but some may be worth the money that you are paying to stream. If the artists go above and beyond to alter parts of the concert to cater to the distance, it can be a very worthwhile experience. Concerts still allow for a person to have something to do to break apart days that are quickly beginning to blur together in the current pandemic. As a K-pop fan, concerts also allow for fans to see new choreographies and performances. After the two days of concerts, my social media erupted in chaos due to the excitement of having new content from the group. But if you are someone who is just a casual fan of the group and go for the fun atmosphere, online concerts would probably not be very engaging and entertaining. Deciding what draws you to a concert, the performers, or the atmosphere, is definitely the deciding factor on whether online concerts would be an enjoyable experience for you. I would say it is worth it to see the sets, performance, and live music. Not every artist will do their concerts the same way, but I would definitely still attend BTS’s concert if I had to do it all over again