Creating queer spaces: Why BUZZ/cut music festival was so important

In 2015, then-governor Mike Pence signed off on the Religious Freedom Restoration Act statewide in Indiana. To say this was controversial would be an understatement. The LGBTQ+ community was particularly alarmed by this new law because we feared discrimination and denial of service. Since then, Indiana has gained a reputation as a non-LGBTQ-friendly state.

Sometimes it seems that Indiana is a haven for hate. Four years post-RFRA, Indianapolis is changing that narrative by celebrating the community with the first-ever BUZZ/cut music festival — a queer music festival by and for the LGBTQ+ community.

During Sateen’s performance, Queen Sateen cleared a runway in the crowd. She then had members of the crowd walk the runway while they performed.
Image by Baylie Clevenger

The festival took place in Fountain Square on Sept. 7, 2019. It featured queer artists and vendors. Some of the artists included Sateen, SSION, and the headliner, CupcakKe.

Ruby from the lesbian disco duo Sateen, who performed at BUZZ/cut, spoke about what it means to have a queer event. She said that commonly, even festivals and events that are meant for the queer community are overrun by people who are not in the community, so it is nice to have space specifically by and for queer people.

Sateen is a queer disco duo from New York. Comprised of Queen Sateen (left) and Exquisite (right) the married duo is unapologetic in both their music and their activism
Image by Baylie Clevenger

Though there were non-queer people present and performing, BUZZ/cut still managed to be an uninterrupted queer space.

Upon arrival, it was clear that this festival was planned with the LGBTQ+ community in mind. All of the performing artists were queer or queer-friendly, and all of the patrons were having fun together and celebrating both our similarities and our differences. Events like this are more important than some people even know.

For Kit Mulv, 22, an event like this was even important enough to cross multiple states to attend. Mulv heard about BUZZ/cut online and decided to come all the way from Massachusetts to attend with her cousin.

Mulv came all the way from Massachusetts with her cousin to attend BUZZ/cut. She said that after the festival she was considering coming out to her family.
Image by Baylie Clevenger

“I don’t want to be super cheesy, but to people kind of like me, they’re afraid of how their family might react and afraid and in the closet, it’s like there are always gonna be people that support you no matter where you are. You can find your family,” she said.

This festival was about more than listening to music and buying cute stickers from a vendor. It was about creating a space that hears, supports, and is comprised of the queer community and queer artists.

BUZZ/cut also broke onto the scene with a bold statement about what the queer community wants at their festivals. The festival lasted for eight hours without a single law enforcement officer present.

Performer SSION got up close and personal with the audience, clearing a space in the crowd to perform.
Image by Baylie Clevenger

Glenn William, 21, attended the festival and said he did not even notice that the police were not there. In fact, he was unaware that BUZZ/cut had even made the decision not to have police officers there until he was asked about it.

William, pictured in the white shirt, danced on stage with Dai Burger, one of the performers.
Image by Baylie Clevenger

“I did not even notice. Which means what? Is it there to keep us safe or is it there to scare us?” he said. “We don’t feel like they’re protecting us. And right now we’re in the community where we feel safe and protected. We’re protected by each other. Yeah, there’s strength in numbers. So I think I feel really comfortable that there aren’t police here.”

The LGBTQ+ community has had a long and complicated relationship with law enforcement, which makes a large portion of the community hesitant to have them present at events like BUZZ/cut and Indy Pride.

NEWSTALK1010✔@NEWSTALK1010JUST IN: Pride Toronto members have narrowly voted NO to allowing police officers march in this year's parade 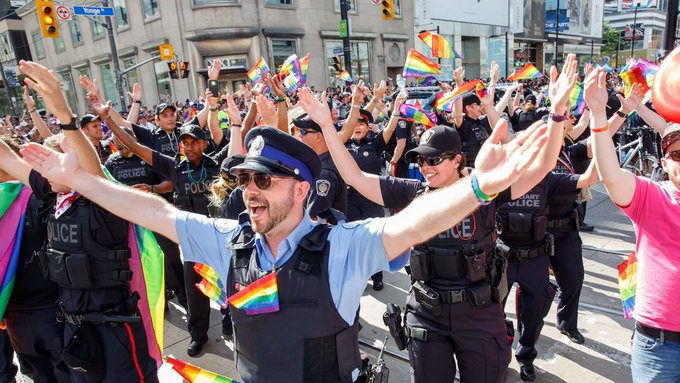 266 people are talking about this

In fact, the Stonewall Riots, which happened 50 years ago, started because of a police raid of a known gay bar. Law enforcement went into the bar with the intention of arresting the patrons for no reason other than being queer and being in a queer space.

This attention to what the community wants is a perfect example of how BUZZ/cut was made by and for the queer community. They paid attention to picking artists and presenting a comfortable and safe queer space.