Free Comic Book Day is upon us, and with it comes a slew of issues old and new! Make sure to stop by your local comic book store, pick up one of these issues, and buy another one to support small business!

That said, your friendly neighborhood BYTE team has compiled a list of some of the best titles available on Free Comic Book Day! 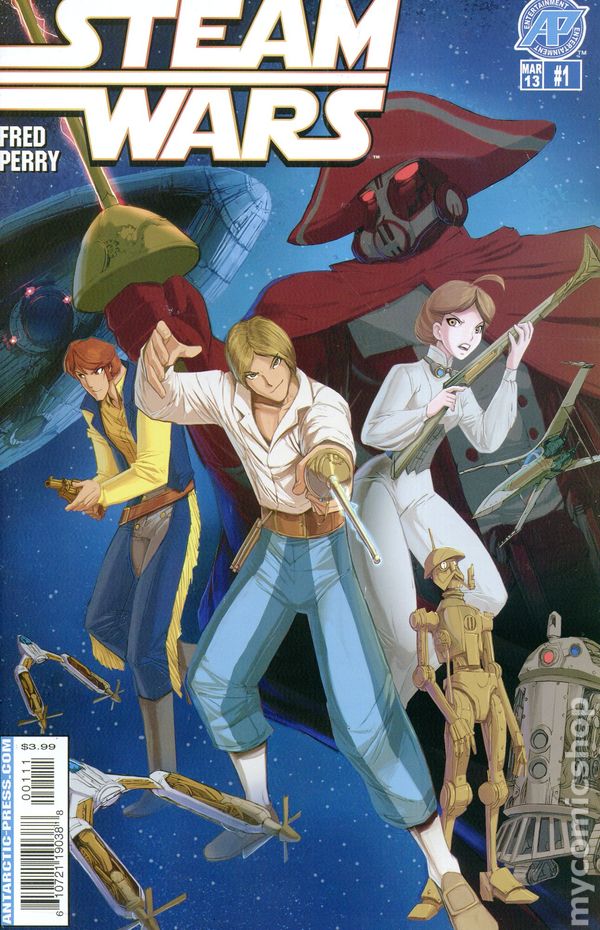 With the announcement of Episode VII's cast, there's no shortage of Star Wars buzz floating around the internet.

But wait! Just because steampunk has earned a reputation for cheesy imagery and occasionally terrible writing doesn't mean you should skip Steam Wars, by Fred Perry!

Unlike many other steampunk versions of popular properties, Steam Wars acts as an homage, not a direct re-imaging of the original franchise. Fred Perry ignores the Death Star trench battle, Han Solo's asteroid escape, and any mention of traps. Instead, Perry manages to craft a world similar visually, but wildly different in narrative. As the comic's official synopsis says:

"While fleeing from the steam-driven war machines of her imperial pursuers, Duchess Imoen stumbles across the home of the last Dragoon: the legendary storm foil warriors of ancient lore! This new (but strangely familiar) steam-fantasy epic will give thrills that haven’t been felt since 1977!"

Perry, who both writes the comic's script and does all the art, seems like he's crafting a unique universe with visually inventive properties to reel new readers in. Frankly, as a fan of the sketchier pencilling style seen in the comic's preview, I can't wait to see where the series diverges next. Mighty Morphin’ Power Rangers #1
Travis Robinson
This is the second time that the Power Rangers have been published as a comic book, the last time being back in 1994. On the first page of the comic it states that the events of this series take place directly after the episode “White Light” where Tommy has returned as the white ranger. At first glance the issue seems a little dated with the phrase “Billy’s rad bug” referring to Billy’s car, even though the word “rad” was used in the 90’s, they typically didn’t use a lot of slang in the television show.
Because Power Rangers was derived from the Japanese Super Sentai series, where events play out similar to an anime, you would expect the comic to be the definitive Power Rangers experience because strange things can happen and not come off as cheesy.
Will the comic turn out to be the go-to experience for Mighty Morphin’ fans? Find out tomorrow on free comic book day with the full review. Sonic the Hedgehog/ Megaman X Flipbook #1
Travis Robinson
If you haven’t read any of the Sonic comics before, it is similar to the television show where Sonic teams up with a bunch of woodland creatures called the Freedom Fighters and try to protect their home from the evil doings of Dr. Robotnik/Eggman. In this issue, the story focuses on the origin of Princess Sally Acorn, the leader of the Freedom Fighters and how she had to grow up quickly to become the leader that she is today.
The Megaman X half of the issue is the first story in the Megaman X series. The story shows how Dr. Cain discovers the lab of Dr. Light and activates X, the Megaman of the year 20XX. Dr. Light gives a warning to Dr. Cain that X should not be awakened until after 30 years have passed or he could wipe out all of humanity. At the time that this message was relayed 100 years have already passed and Dr. Cain needs to decide if he should actually awaken X and see Dr. Light’s creation put to work.
Find out how Sally became the Freedom Fighter she is and how Dr. Cain activates X in the full review of the issue tomorrow on free comic book day. With the Guardians of the Galaxy movie being released in August, I’m trying my hardest to get a hold of every comic in the series just so I can have a firm grasp on the lore (because everyone loves that guy who points out the differences from the comics). I’ve read all of the modern incarnations of the Guardians and gotten a good fill, but imagine my sheer delight when I learned that Rocket Raccoon, the most attractive and smart Guardian by far (at least, according to himself).
That’s right, Rocket Raccoon has his own series in the Marvel universe. However, we aren’t getting that until July. What you can grab today is a special one-off titled All Rocket Raccoon, which has Rocket being witty and fun on his own adventure before his series debuts this summer.
You can see an official preview here, but knowing the way Rocket is you’ll definitely enjoy whatever trouble the adorable gun maniac gets into.