'Don't dream it, be it': 'Rocky Horror' becomes place for students to fit in 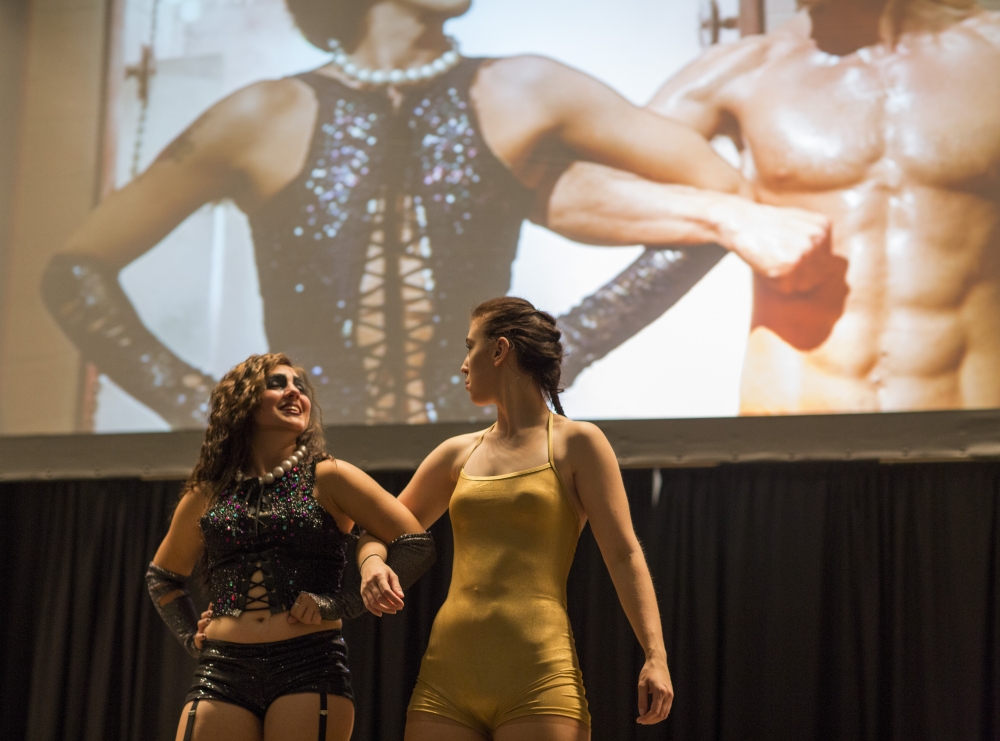 Olivia Germann felt out of place as a highschooler in Downer’s Grove, Illinois — a village near Chicago.

She realized she was pansexual (meaning she is attracted to any sex or gender), and most of her friends were straight. But if there was one place she fit in, it was at her hometown’s “Rocky Horror Picture Show” Shadow Cast show.

It was a place where people could be who they wanted, the English literature major thought, just like Rocky Horror’s lead character Dr. Frank N. Furter, a transvestite mad scientist whose goal is to create the perfect man.

“Rocky Horror Picture Show” is a 1975 musical comedy horror film that received little mainstream attention when it was first released, but soon grew into a culture phenomenon. Now, every year on Halloween, casts all over the country perform the show live with the original movie playing behind the actors.

And now, Germann is the director of the show that, in a way, helped her come out as pansexual.

She leads a cast of an assortment of people at Ball State: former theater majors, movie junkies, people who were dragged into the show by friends and those from the LGBT community just looking for an additional safe place.

The low-budget movie that received little attention when it was released is now the reason around 30 people come together at Ball State with an undying passion for the film to perform in front of a sold-out crowd year after year.

It’s an experience that allows the cast to be whoever they want to be for a couple hours. 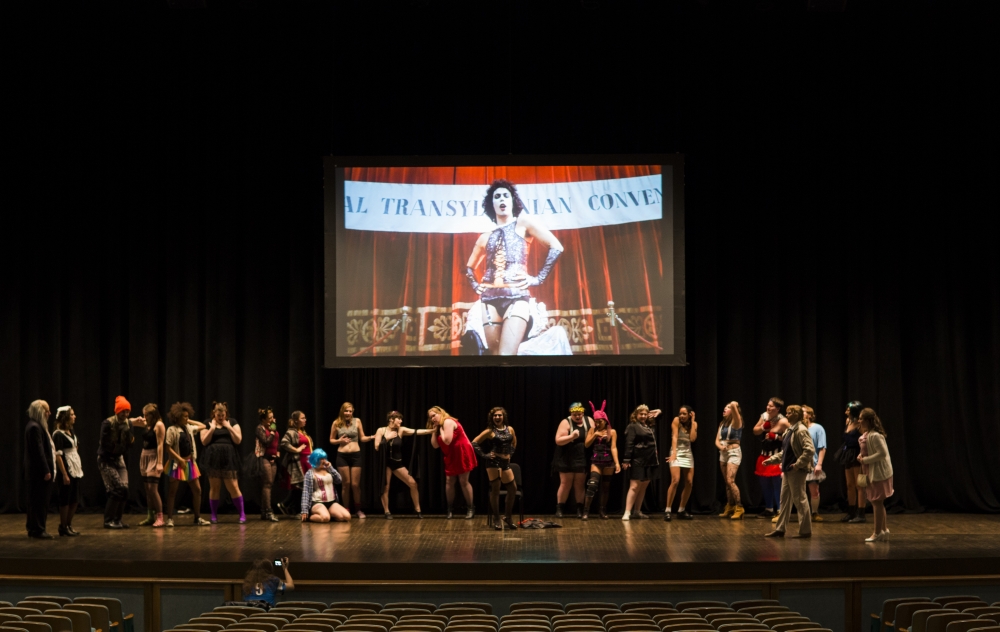 By most professional standards, the movie is no masterpiece.

Even in the very first scene when the characters attend a wedding, part of a microphone is accidently in the shot.

“When it came out, it got s--t reviews,” Germann said. “Everyone was like, ‘This is awful.’ … There’s a bunch of things in the movie that don’t make sense because the studio made them cut it.”

There’s the obvious continuity errors: One of the character’s saxophones doesn’t have a reed in it. The script had to be cut down during the middle of filming because it would have been too long, so some parts just don’t make sense.

It was never supposed to be a phenomenal video because of the low budget, telecommunications professor Wes Gehring said.

Yet something about the movie made it stick. It almost immediately became a cult film, a movie unpopular with mainstream audiences but loved by a dedicated fanbase. Soon, people started creating shadow casts, and the concept of midnight films developed. Even audience members began dressing up and using call-outs during the middle of the show. In places like the Midwest and in big cities, the show took off.

“Suddenly you could go to a movie theater and go against all the typical things in the movie,” Germann said. “You could scream, you could dance, you could throw things. It was basically the antithesis of what a normal movie experience was. It really just kind of combined theater and movie and cinema in this really interesting way that prompted this whole slew of new ideas and new things.”

Throughout the film, the audience is nearly as involved as the cast in some cases, and the performance can be intimidating for “Rocky” virgins. Some in the audience dress up, and shouts from the audience are just part of the fun. The heroine’s name, “Janet.” is met with “bitch,” and when the audience hears her fiance’s name “Brad,” another obscene term follows.

Some communities, like Germann’s hometown, have “Rocky Horror” shows every Saturday all year long. And they don’t struggle to fill seats — people like Germann return weekly just to be a part of the audience.

Mainly because of the shadow casts, fanatics appreciate the movie itself.

Angie Hubert, Ball State’s Dr. Frank N. Furter, is a telecommunications major and thus has an eye for when movies just aren’t right. Still, she has a special place in her heart for B-grade movies like “Rocky Horror.”

Her mother, a fan of the film herself, showed the movie to her when she was in fifth grade.

Telecommunications majors are one of the groups drawn to the “Rocky Horror” productions. Even if Hubert doesn’t think the production value is that high, she sees worth in the parts of the story that are more in-depth and lead viewers to relate to the characters.

She also jokes that because she is focusing on digital production, the movie makes her feel better about her skills. 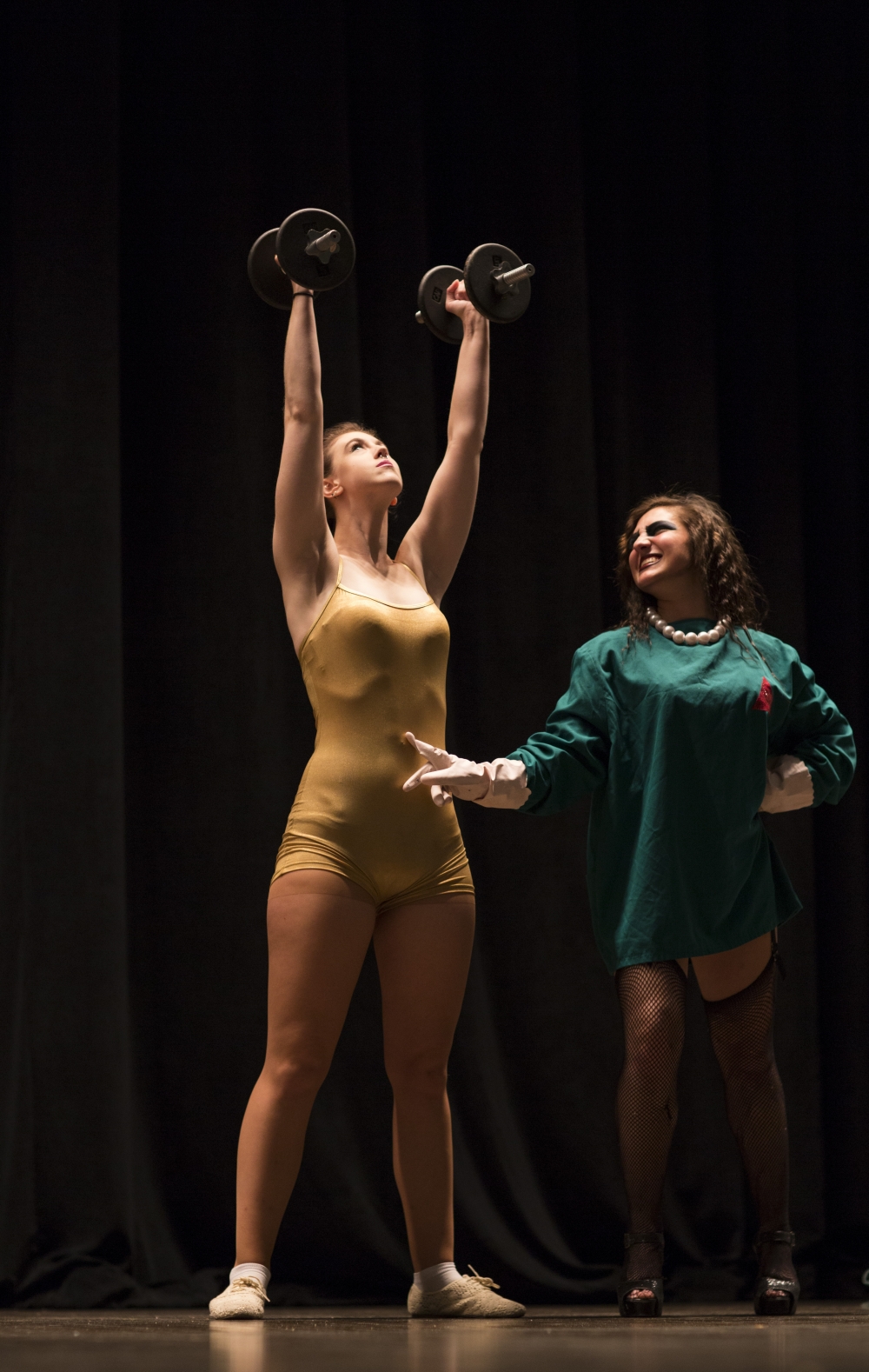 Before Hubert joined “Rocky Horror,” the most extensive acting she had done was a play in fourth grade.

She showed up on the first day of auditions freshman year in jeans and a T-shirt, while most others were in heels and scantily clad. Still, she was chosen to be an usherette, one of the performers who dance in the aisles.

Germann, on the other hand, was one of those who acted in every show she could stumble upon growing up: "Legally Blonde," "Music Man," "Guys and Dolls," "The Whiz," "Charlie Brown."

For Germann, it was weird when she stopped acting in the shadow cast to become the Ball State director at the beginning of her junior year. She had never done anything like it, and the one thing that kept her at ease with the situation was advice from the shadow cast director in her hometown.

Now she is back to acting — while directing at the same time — after she had to step in as Rocky when the original actor got hurt.

Germann prefers the cast to be a mix of actors, such as herself, and people without theater backgrounds.

That diversity fits with what “Rocky Horror” is all about.

“It’s really interesting because the people in our cast, they come from all different majors, … so we get this huge slew of people from different walks of life,” Hubert said.

And most of the dancers’ costumes don’t have one specific look, with one man donning a pink cowboy hat.

“It actually mashes together really well. ... The amount of enthusiasm and boldness and flamboyance all kind of meshes together to make this really fun experience,” Germann said. 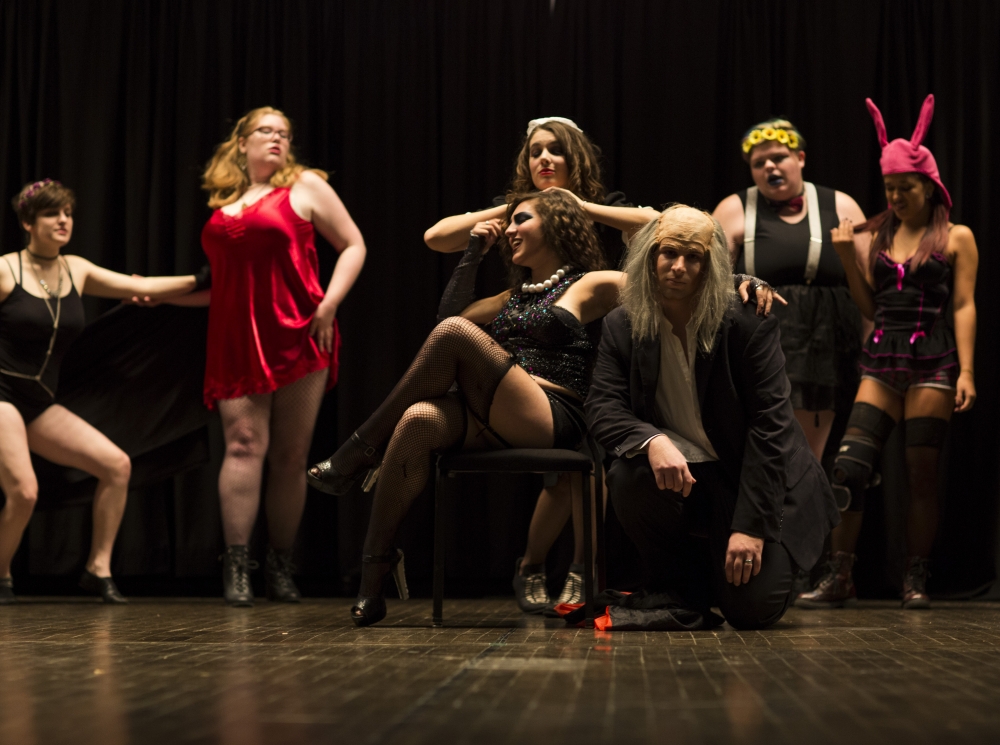 The Rocky Horror Picture Show Shadow Cast rehearses a scene on Oct. 28 in John R. Emens Auditorium. The show will be on Halloween night starting at midnight . Emma Rogers // DN

When “The Rocky Horror Picture Show” was first released, it was as a promiscuous movie. That’s part of what helped it become a cult film, Gehring said.

Its focus on sexuality, however, also helped it become a fixture in the LGBT community.

It was the first of its kind, Germann said, and it helped her admit her own sexuality. Whenever she was sad, she would just listen to the soundtrack.

“It gave me a real sense of confidence,” Germann said. “If Frank can get up there and strut his stuff, maybe I can come out of the closet, maybe I can be bolder and not take s--t from people. It was just something that gave me a lot of personal strength.”

While Hubert’s story is a little different, she loves the freedom “Rocky Horror” has given her to be herself.

Back then, most of Ball State’s main characters had stuck to the gender of the movie character.

She got the part and immediately dove into learning the role. That first year, she tried hard to be as movie-accurate as possible: same moves, same faces, same hair — accomplished with 130 bobby pins.

She was worried about the criticism and was just trying to prove she could do the role as a woman. At her first show, an audience member came up to Hubert and told her she almost left when she realized Hubert was a woman playing a male role — but she was glad she didn’t.

“These past few years, I’ve been so movie-accurate because I want to impress people, because I was afraid since I was a woman playing a male character. … I shouldn’t have to feel that scrutiny,” Hubert said. “In theater, it doesn’t matter your gender, if you want to play a part, you play that part to the best of your ability.”

By now, Hubert feels she has already proven she can do the role well.

Because of that, she’s adding a more feminine side to the character. She’s leaving her hair down, wearing more makeup and “showing off the sexuality of being a woman.”

To her, that’s what “Rocky Horror Picture Show” is about: the ability to be one’s self.

“The reason so many people like [“Rocky Horror Picture Show”] is because it’s a movie that allows you to be open, be who you are, be who you want to be,” Hubert said. “And this movie is about being different. It’s about not really forging onto the same path as everybody else.”