Ball State (2-1) will take on Florida Atlantic (1-2) Sept. 24 at 6 p.m. at FAU Stadium in Boca Raton, Florida. It will be the first-ever meeting between the two schools.

The Cardinals are coming off a 41-14 home win over Eastern Kentucky last week, while the Owls lost their second straight game on the road against Kansas State by a score of 63-7. Ball State has not played a school from the current Conference USA since losing to North Texas in 2013.

Jake Fox, the Daily News football writer, is traveling to the game and offered up some insight on the key positional matchups:

These teams have headed in complete opposite directions in this regard to start the season.

Led by Anthony Winbush with four sacks, Ball State is tied for third nationally with 14 sacks so far this season. This comes one year after the Cardinals only registered 17 as a team.

Florida Atlantic, on the other hand, has already given up 13 sacks for a loss of 89 yards in three games. Going against an offensive line with a young left side, look for Ball State to get in the backfield often again this week.

The Owls got killed on the ground by Kansas State last week, giving up 336 rushing yards. They're allowing a total of 252.7 yards per game this year.

Head coach Mike Neu said there won't be any extra emphasis on running the ball this week, despite Florida Atlantic's struggles. James Gilbert leads the team in carries, yards and touchdowns, but the team has stuck to a committee approach for the most part.

Ball State has slowed down since the big rushing performance against Georgia State in Week 1, but have still been solid the last two weeks against Indiana and Eastern Kentucky.

Riley Neal looked a lot better at home against Eastern Kentucky. He completed his first 16 passes and threw for 238 yards and two scores.

Oh, and Ball State was without one of its starting receivers (Corey Lacanaria) and another (KeVonn Mabon) left the game in the second half. Neu said after practice Sept. 22 that both guys are ready to go this weekend.

Florida Atlantic is giving up over 250 yards per game through the air through three games, including 387 yards to Southern Illinois at home in Week 1. The secondary is young, with three sophomores and a junior. They will have a hard time with Neal and all his weapons.

Gregory "Buddy" Howell Jr. is the Owls' starting running back and is having a solid season so far. The junior is averaging 4.9 yards per game for 237 yards on the season with four touchdowns.

The Cardinals shut down Georgia State in their first win and then Eastern Kentucky last week for only three net yards. Indiana had some success against Ball State's defense, rushing for 187 yards.

Howell's ability to run with success against some good teams makes this matchup interesting. But Florida Atlantic appears to be inconsistent on offense at times, and the Owls have only made it to the red zone three times this season. 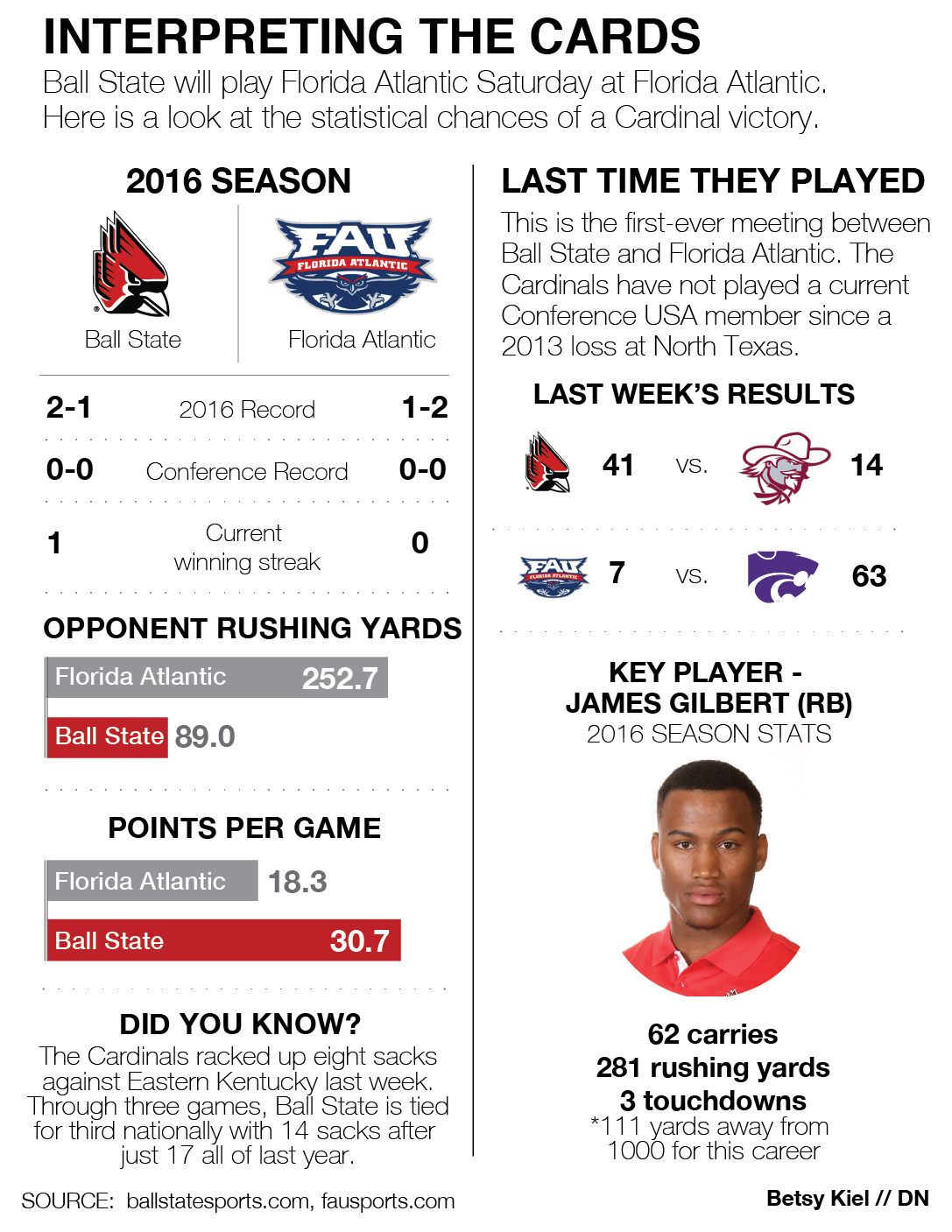 Cardinals fall to Georgia Southern on the road

By Nick Shelton / 20 hours ago

Ball State shows out at the Bethany Moore Invitational

Ball State Women’s Tennis opened play for their fall season with the 4th annual Bethany Moore Invitational and picked up right where it left off from last year’s Mid-American Conference championship.

A place you’ll be happy to call home