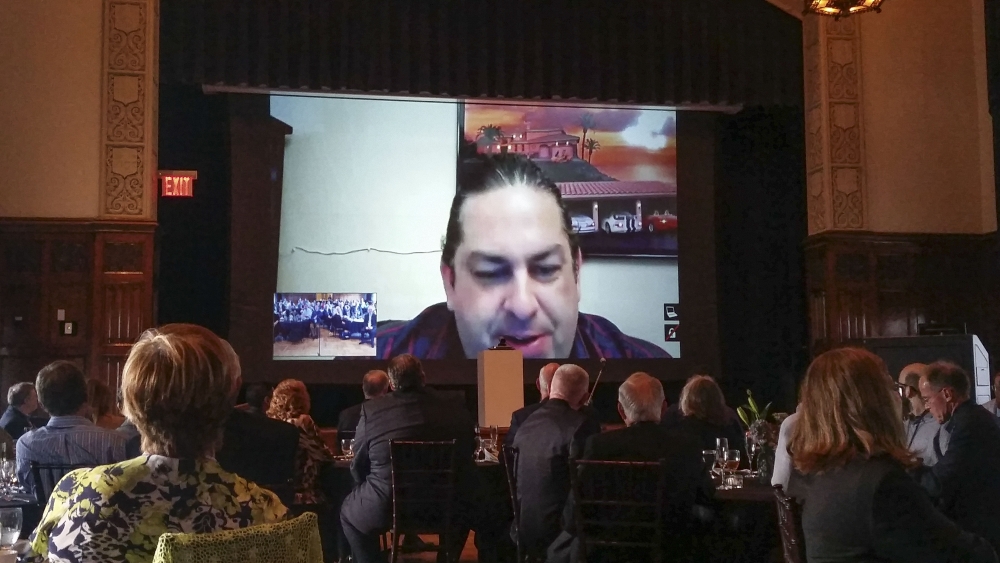 Robots, already common in manufacturing, will inevitably take over more and more tasks as they compete with humans for jobs, the real-life inspiration for the TV show “Scorpion” told a Ball State audience.

“There are people doing blue collar work now in factories around the country, and blue collar work can be done by robots,” said Walter O’Brien, the inspiration for the character played by Elyes Gabel on the CBS show.

O'Brien appeared May 25 via video conference for the Security and Software Engineering Research Center Showcase at the David Owsley Museum of Art.

O’Brien, who was born in Ireland and started a company named Scorpion Computer Services, said he has a 197 IQ and that he started developing his computer hacking skills at a young age.

When he was 16, O'Brien ranked first in the national high-speed computer program solving competitions. At 18, he represented his home country of Ireland in the World Olympics in Informatics.

"Scorpion" depicts a team of computer experts who solve complex global problems and save others.

In his video appearance at Ball State, O’Brien said industrial robots today cost a quarter-million dollars or more, but will become cheaper over time and increasingly compete with people.

"[Humans are] a liability," he said. "They sue, leave, get sick and take vacations. Suddenly, we are at that pivot point where the robot is cheaper.”

Jobs in the future will increasingly go to people who build robots and work with machines capable of artificial intelligence, he said.

O’Brien said artificial intelligence will reach “singularity” around 2045, meaning it will have the ability to exceed human thinking.

“Ten years from now, hardware and hard drives at Best Buy will have the same capacity [as the human brain], and Intel chips will have 100 billion transistors,” he said. “That means I can back up your brain to a hard drive just like you back up your iPhone at night now.”

He said medical technology would eventually allow people to use stem cells to grow new bodies.

“Then I can grow you a twin brother or sister in four years and download that brain I uploaded into that stem cell host,” he said.

O’Brien said cancer, HIV and other diseases could be conquered by growing those replacement bodies from stem cells — or transferring the contents of a person’s brain to a robot.

O’Brien said he’s started a new company, ConciergeUp, that takes care of problems for people. However, the “problems” he cited as requests from clients were anything but normal:

He said one of his goals for the CBS show is to attract prodigies to his companies and for younger viewers to aspire to be like the heroes on the program.

Brandon Patterson, a graduate student in computer science, said he found the speaker both entertaining and darkly humorous.

“A lot of things he talked about were sort of overview, really big-picture things,” Patterson said. “He very nonchalantly said that the robots will learn to think for themselves, then immediately kill us off.”

Dolores Zage, an assistant professor of computer science, was left with questions about the definition of humanity.

“By 2050, we aren’t going to die — we are going to be uploaded,” she said. “Then what’s humanity? Does humanity mean dying or is it immortality — or what are we then, are we part machine?”

By Grace McCormick / 2 days ago

For the first time since Jan. 31, Ball State’s Board of Trustees met in person in Cardinal Hall B on Friday. At the meeting, the board passed a resolution to adapt the spring 2021 semester schedule.