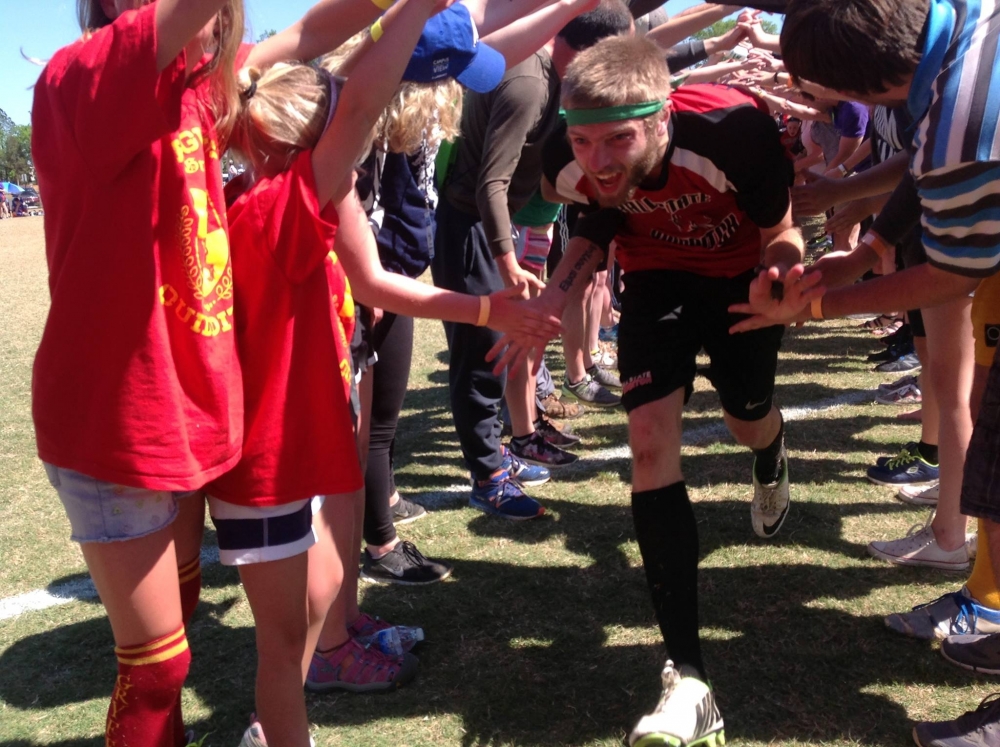 Shown above, Blake Fitzgerald runs through a tunnel of people after Ball State beat Texas, the defending champions, to advance on to the final four. Fitzgerald continued to play three more game after he broke his nose in an earlier game. PHOTO PROVIDED BY KIM BELCHER

The Ball State quidditch team placed fourth in the nation out of 60 teams at the U.S. Quidditch Cup 9 tournament in Columbia, S.C., on April 17.

The team had to qualify for nationals at regionals during the Fall Semester. During games, Moreno leads cheers on the sidelines and calls out things she doesn’t think the team will see while they are playing.

President Rebecca Sampson, a junior psychology major, has played the sport for three years and has been to nationals every year. She said the competition is crazy because of the amount of teams and spectators that are there.

“It’s a lot different than any other tournament we compete in. ... The games are a lot more intense, the competition is more brutal. It’s a lot more fun, I think,” Sampson said. “This is the farthest Ball State has gotten at the national level ever.”

Luke Lipps, a sophomore criminal justice major, has been playing quidditch for two years. He said different regions have different playing styles, so when they go to a competition, they have to change their normal playing style.

“We watch games of other teams that we know are playing," Lipps said. "Each position focuses on what they do well and what they do poorly, and we plan around capitalizing on their weaknesses and making sure their strengths get slowed down or stopped."

Sophomore accounting major Andrew Caratini played a position he had never played before due to a change three weeks before the competition, which he called a very surreal experience.

“I think the leadership that we have on our team is really what helped us do so well, and it made everybody that hadn’t necessarily been there or had that much experience be able to do so well,” Caratini said. “I’ve played sports my entire life, and there’s just something about quidditch that the adrenaline just gets pumping and it just is a lot of fun.”

Another member of the team, Blake Fitzgerald, played three games with a broken nose after getting hit.

“He wasn’t going to play in the Texas game because he didn’t want to injure it anymore, and then at one point during the game, we were doing so well that he said, 'You know, I don’t care if I injure it any more, I’m playing,'” Caratini said. “I think that was a really big thing for us because it allowed [the seeker] to rest on the sidelines and get ready to go catch the snitch. … [It was] definitely impressive.”

By Staff Reports / 44 minutes ago

By Associated Press / 21 hours ago