Ah Metacritic, truly a website that has saved me from many a terrible game. However, sometimes you have to wonder, are the games that are rated the lowest on Metacritic truly that awful? Well here at Byte we’ve decided to try that out so you don’t have to. To kick this off we’ve bought the lowest rated Wii U game on Metacritic, with a whopping score of 11, Family Party: 30 Great Party Games Obstacle Arcade. Let me tell you a story, a story of regret. The regret comes from actually playing this terrible game. It’s a Saturday afternoon, it’s beautiful outside and I’m with some good friends. Like the rational people we are, we decide to spend that beautiful Saturday playing Family Party: 30 Great Party Games Obstacle Arcade. I regret roping these friends into this game. They knew it was for content, but I don’t think I can ever forgive myself for this.

30 Great Party Games tries so hard to be like the Mario Party series. It tries but it falls flat on its face. None of the charm that Mario Party has is in this game, only cheap, boring games, and the most annoying, obnoxious announcer ever. This game is announced by a bear who is constantly making an off brand Dreamworks face. The game is played pretty much exclusively with the Wii remotes and nunchucks, though in the Challenge Mode, one of the game types, there are bonus games to play which are focused around the gamepad.

This game was painful, it’s hard to believe that a game could be this painful honestly. Even ignoring the painful gameplay, just the announcer was bad enough. The announce would attempt to “cheer us on” while playing the game with the strange names the game gives. It was funny at first, but eventually it just became pure annoying torture. While rowing boats, we were frantically yelling Carol at the screen as it exclaimed it right back at us. The ultimate example of that is in one of the bonus games. It was a simple game where one person was on a ball and they had to get their own coins while using the gamepad and everybody else was running around using the Wii remotes. The gamepad user had to tilt the gamepad to move around while everybody else had to vigorously shake their remotes to run. Why? It was so useless but they decided to put it in there anyway. The arbitrary use of the Wii remotes wasn’t even the worst part. The worst part was how long everything took. Each game was at least 90 seconds. Now you may be thinking “that sounds like a reasonable amount of time for a game.” It wasn’t. Time dragged on in these games, those 90 seconds felt like 90 years. Mario Party games usually are around 30 seconds each. That’s three times the length of the average Mario Party game.

Even when you finished a game early, you still had to wait for the AI to finish, no matter how long it took. You could finish in ten seconds and wait for the rest of those 80 seconds for the AI to complete a puzzle. Not to mention the AI could, and very frequently, be wrong. One of the games you have to shoot condiments onto hot dogs and the AI would pretty much constantly choose the wrong condiment.

The thirty seconds that Mario Party games take would have made these games take too long. They tried to pad this game by making each game take forever, but the only thing they succeeded in was making me want to burn this game to the ground. We all think that there was one guy at this company who really cared about video games.

There were a few games that had really well thought out systems. From changing who was in front in a (completely impossible to win) soccer game to give everybody an equal chance of getting points, to balancing the strangest parts. There was one guy who obviously cared a ton about video games. Too bad he was overshadowed in a wave of pure garbage. Everything else about the game was terrible, from its Gamecube-esque graphics to it's frustrating controls. The minigames in this were awful and this game was awful.

The best way to sum up the AI in this game is with a quote from Chase Streetman, exclaimed in the midst of an intense game of Hide the Joker, a game that truly will last through the ages. In Hide the Joker the player with the gamepad must move cards around and the other players have to keep track of which cards are Jokers so they don’t choose them.

In regards to the AI player, John, Chase said that “John is a joker seeking missile.” The AI in this game is laughably bad. It’s like if you took the worst AI in Mario Party and then made it even dumber. When we were playing, to be worse than the AI was to show that you were hopeless.

The movements of the AI were so robotic as well. The greatest example of that is when you had to lead a circle around an obstacle course. It couldn’t have been clearer which one was the AI as its motions were jerky and robotic. This is fine when you’re playing with many people and one AI, however it’s easy to imagine how awful it would be to play with two or even three AI players. All it ever did was get in the way of other players and move about the stage jerkily. 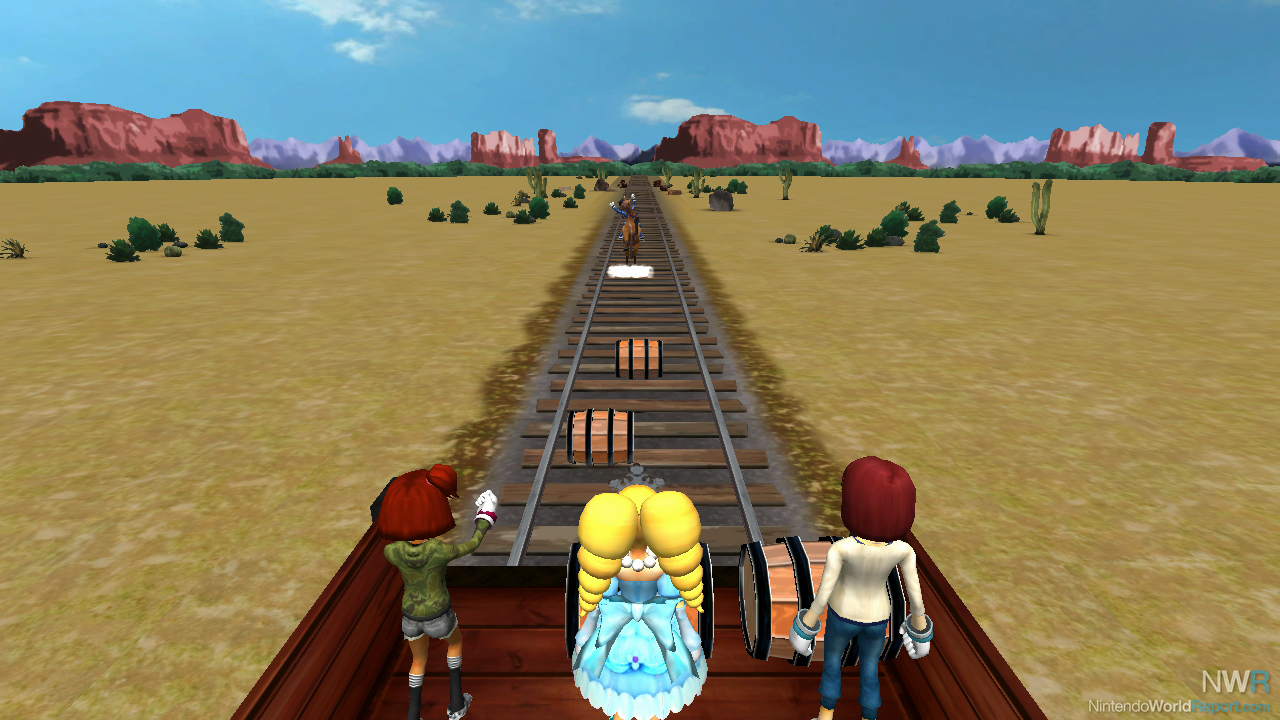 One of the people I was playing this game with, Courtney Tuchman, came in with joy to experience this game. I picked her up while she was fresh faced with excitement, never having experienced this game before. However I had already sat through three rounds of it, one that I played, and two that i watched other people play. My joy was already gone, I was left an empty shell, all of my enjoyment eaten away by the devil that is 30 Great Party Games.

Courtney had all of her excitement. She was a baby, fresh into this world of terrible video games. She knew nothing of the dread that was awaiting her. So we plopped down in front of the TV as the faces of our friends stared at us, eyes dead and soulless, enjoyment sucked from. Within two games all of Courtney’s joy was taken from her. At the end of the game she looked prepared to leave this mortal coil. She had seen Hell and Hell had looked right back at her.

It proved to be a worthy enemy, taking many hammer blows and the manual taking on a lighter and winning, but eventually it succumbed to the sweet embrace of death. It was a cursed object I hope for no one else to ever touch again.

Is it really that bad?

Yes it really is. Save yourself the ten bucks on Amazon and just don’t play this game. This game drained the joy away from those who played it. There’s a sweet spot in bad where it’s so bad it’s good, but this was just so bad it’s painful.

Don’t support this game because I don’t want another 30 great party games, I just want those two hours I spent with this game in my life back. It truly is a Metacritical fail.