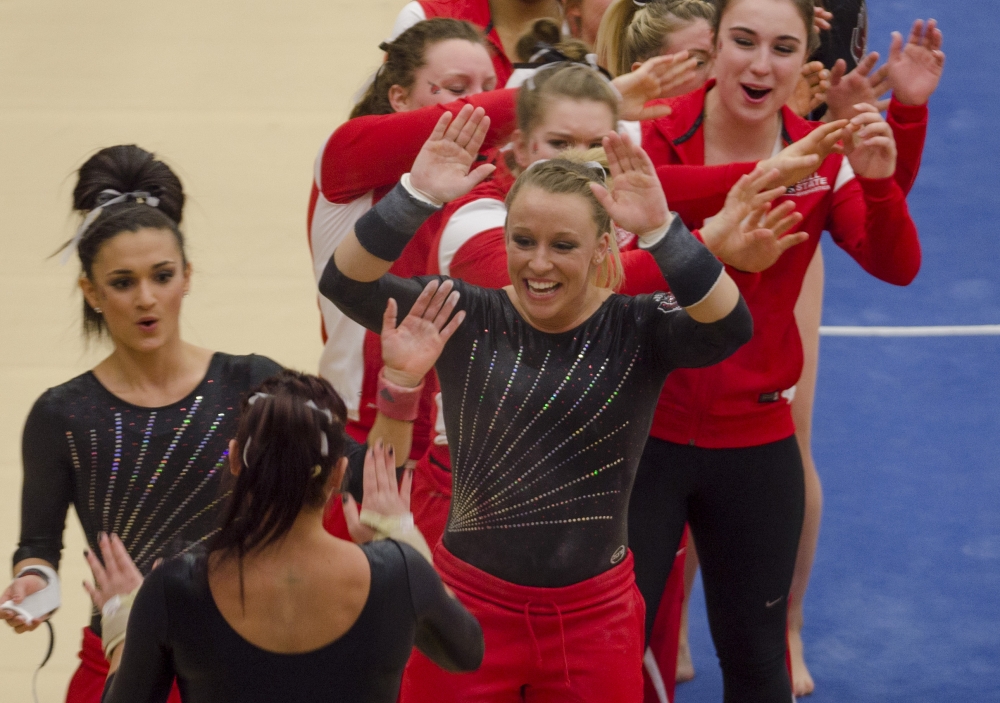 Sophomore Kayla Beckler goes to high-five her teammates after competing on the vault in the match against Northern Illinois on Feb. 27, 2015, at Irving Gymnasium. DN PHOTO BREANNA DAUGHERTY

Despite opening up the season with a road loss, gymnastics head coach Joanna Saleem looks to utilize the deeper pool of talent she saw in the individual performances during the first meet of the season.

This season, the Cardinals have a new venue on Ball State's campus. No longer will they compete in the recreation center like previous seasons, but instead they will be placed in Worthen Arena, creating a much more open atmosphere.

While some people are opposed to change, Saleem embraces the venue change, which will be utilized for the first time on Jan. 17 against Towson.

"It will definitely be a great experience to be out there in a bigger setting with the big screen and cool march-out videos. It’s definitely something to look forward to,” Saleem said. “Gymnastics is a really family fun event. ... There are going to be the video boards there, it offers more space, and it is going to be really exciting.”

Gymnastics already opened the season on Jan. 8 against No. 24 Kentucky. The Cardinals lost 194.825-191.650 to the nationally-ranked opponent, but individual standouts throughout the meet were seen across the board.

Senior Erin Patchey and sophomore Jordyn Penny scored 9.800 on the vault, tying for third on the day.

The balance beam also housed a third place finish when sophomore Baylee Bell scored a 9.750, tying with a Wildcat senior.

Senior Denasiha Christian scored a 9.850 on the floor exercise, good enough for a second place finish. Patchey also competed on the floor and finished in fourth place with a 9.775.

Looking forward, the Cardinals will compete in Muncie on five separate occasions this season, one of which will be at the Mid-American Conference championships on March 19.

“I’m really excited about it. We are going to be competing in the MAC Championships down there this year. It’s going to give us more of that home court advantage, having competed all of our home meets down there,” Saleem said.

None of the Cardinals' meets last year were against multiple opponents until the MAC championships. This season, Ball State will play in three dual meets and host a tri-meet on Feb. 14 where they will get another chance to face off against Kentucky as well as Kent State and Lindenwood.

Junior Kayla Beckler was one of the team’s top scorers last season. During her record-setting sophomore season, Beckler posted a career high 39.175 all-around, which she looks to improve upon this season.

“Honestly, this year, I feel a lot more mentally prepared now, having almost a full year of competing all-around under my belt. I am more comfortable,” Beckler said.

She has several goals she looks to improve upon throughout the course of this season.

“[I hope to] be more consistent in each meet and to be able to score where I want to be at all events. Many other girls on the team have also set goals for... the upcoming season," Beckler said.

While looking to attempt her own goals, she keeps in mind that it is important to "be out there having fun."

Looking forward to the season ahead, Beckler wants her and the rest of the Cardinal gymnasts to "be able to say we improved all throughout the season to show everyone what we have been working towards."