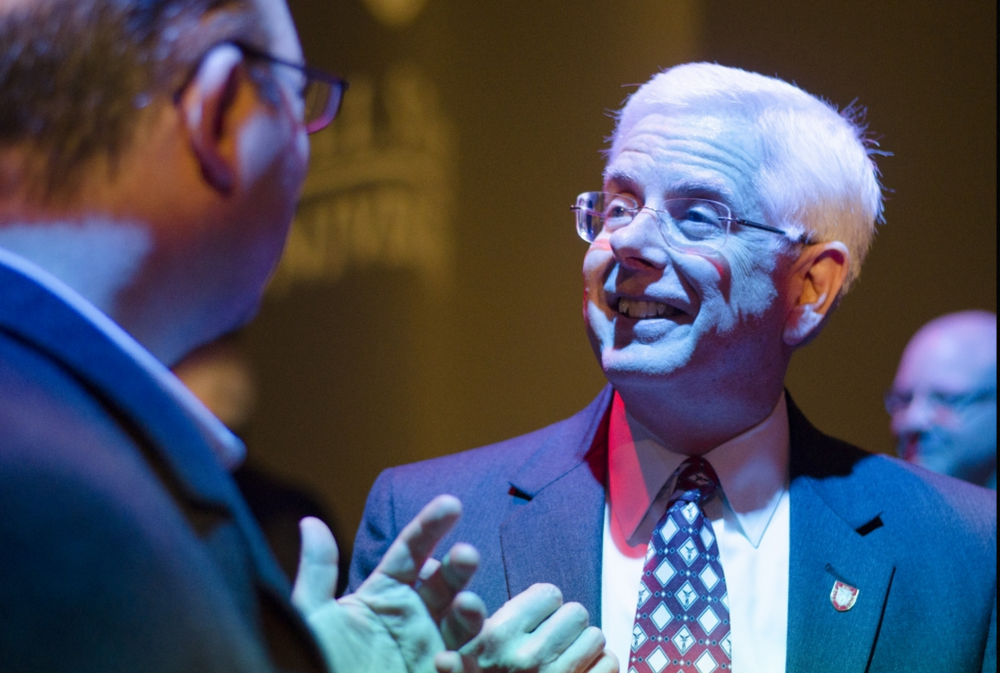 Ferguson after his State of the University address in February 2015. DN FILE PHOTO BREANNA DAUGHERTY

Monday’s announcement that President Paul W. Ferguson will resign three and a half years before his contract is up came as a surprise and prompted calls for the university to explain what happened and be more open about the departure.

See our roundup of all the Ferguson resignation coverage here.

"The speculation begins: 'Why?' 'What happened?'” said Dom Caristi, a professor in the Department of Telecommunications. “This is very sudden, and nobody expected it. Nobody knows anything at this point."

Caristi and others said the university needs to explain what is happening.

"I think that whatever the Board of Trustees knows, they really need to release it right away," he said. "Because the rumors are going to start, and the best way to eliminate rumors is to put the facts out there."

The resignation was announced in an email from the Board of Trustees, and board Chairman Rick Hall would offer no explanation other than it was a “mutual decision” with the university.

Ferguson was nowhere to be seen on campus and also said little in a statement of his own, maintaining it had been an “honor and a privilege” to hold the position.

"We have ... worked diligently to refresh our vision and legacy of beneficence and entrepreneurship, refocused on being student-centered and community-engaged, and improved many of our policies and procedures to be best practices," Ferguson said in his statement.

Hall acknowledged the puzzling nature of the announcement.

"The timing might be surprising, but it was in the best interest of the university to move forward in this way," he said. "The university is moving forward, and we're committed to the future."

Hall declined to give any further information as to why Ferguson was leaving. University spokesperson Joan Todd said the process of forming a search committee will begin soon, but nothing has been decided.

Todd also said media inquiries are being directed to Myra Borshoff, a Ball State alumna who founded a successful Indianapolis public relations agency, known for its work in crisis communication. Todd described Borshoff as a “friend of the university,” and said Borshoff offered her assistance to the board. However, Borshoff said Hall contacted her and asked her for assistance.

The decision cuts short a presidential term that had been contracted to last until June 30, 2019 — if not longer. Both the Board of Trustees and Ferguson, 61 when he came to Ball State, expected he would stay even longer, the two said last year.

Changes Ferguson made include refocusing the university’s brand from “Education Redefined” to an emphasis on “entrepreneurial” and “student-centered” education. But Monday, within hours of the announcement, his biography page was removed from the university website.

Associate professor Amy Harden, current president of University Senate, said she hopes the university can continue the momentum it has built during Ferguson’s tenure.

“I am immensely saddened by this news,” Harden said. “The refreshed strategic plan with emphasis on promoting Ball State’s unique niche through entrepreneurial learning and community engagement has provided excitement and energized faculty and students alike.”

Joseph Losco, a political science professor and co-director of the Bowen Center for Public Affairs, said Ferguson set a strong foundation for his long-term successor.

“I think we’ve had a series of strategic plans that have been tweaked over time," he said. "I’m sure a new president coming in will tweak them some more, but I think the direction of the university is pretty clear, and so the new president will probably come in and perhaps set some new goals but also continue some of these goals that have been developed over the last few years.”

Some students on Monday said they hadn’t known the president long enough to form much of an impression. But among those who had met Ferguson, there was an appreciation for his ability to connect with people.

Jack Hesser, the Student Government Association president, met with Kay Bales, vice president of student affairs, and Dustin Meeks, the student representative on the Board of Trustees, Monday afternoon about Ferguson's resignation.

“I’m very confident, and the entire Student Government Association is, … that the university will continue to move forward and remain committed to the [The Centennial Commitment plan]," Hesser said. "Most importantly, we won’t let anything that Dr. Ferguson contributed to the university go by the wayside.”

"I knew he was an incredible person,” she said. “It felt like I was meeting a celebrity. President Ferguson and his wife are some of the kindest people I have ever met, and I wish them nothing but the best in the future.”

Cardinal Greenways 5K returns this summer with a new course

Cardinal Greenways is hosting a series of events — starting with the “Cardinal 5K” — that offer multiple different methods of getting active, as well as different options for people looking to compete or enjoy time exercising with their families.