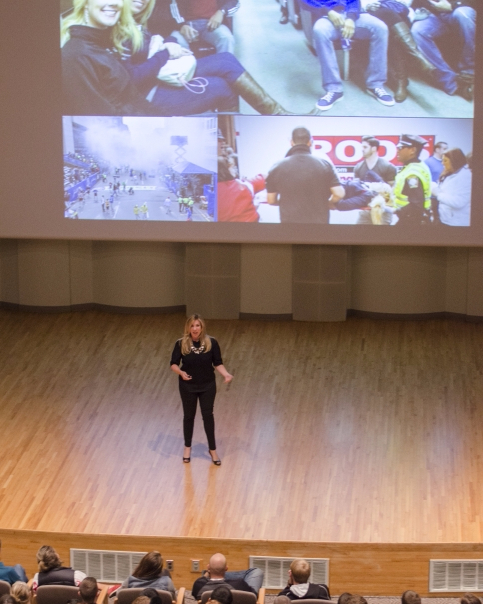 Heather Abbott spoke at Pruis Hall on Oct. 2 as part of the Excellence in Leadership speaker series. Abbott is one of the 17 Boston Marathon Bombing survivors who became amputees. DN PHOTO BREANNA DAUGHERTY

Twelve seconds after the first explosion, the second bomb detonated, propelling Abbott through the restaurant’s doors which, fortunately for her, were already open.

Abbott is one of the 17 Boston Marathon Bombing survivors who became amputees. She spoke Nov. 2 at Pruis Hall as part of the Excellence in Leadership speaker series.

April 15, 2013, was supposed to be fun for Abbot — not tragic. She and her friends went to a Boston Red Sox game, out to lunch and to the 117th Boston Marathon to catch the end of the race. It was a tradition for the group — one they always did on Marathon Day.

After the explosion, Abbott said it was like her foot caught on fire.

“I didn’t know what was happening, I had the sense we were under attack somehow," she said. "Nobody knew what would happen next.”

Abbott wouldn’t hear the specifics about the bombing until later. Two brothers with ties to Kyrgyztan had independently placed two backpacks stuffed with bombs near the marathon’s finishing line, according to the History Channel’s website. The surviving terrorist, Dzhokar Tsarnaev, was sentenced to death during a two-month trial this summer.

What Abbott did know after the bombing was that something was wrong with her leg. Doctors attempted to salvage her limb with several surgeries, but eventually, they recommended amputation.

Abbott found herself in the “minority” among amputees, most being men older than 50 who had lost their limbs from diseases like diabetes, she said. This drove her to become a certified peer counselor.

The American Amputee Coalition trains members for peer counseling and matches similar amputees together for counseling.

“When I was in the hospital, it was mostly men that came to see me, which was helpful, but I had a lot of questions that they weren’t able to answer, … so to be able to now do that for other amputees, especially women, has been really great,” she said.

Peer counseling isn’t the only way Abbott "pays it forward." She shared two life strategies with her audience: accept what you can’t change and move forward, and rely on others for support.

Abbot has started her own foundation, in addition to counseling other amputees.

The Heather Abbott Foundation focuses on providing prosthetic limbs to people who have lost theirs in traumatic experiences.

Abbott said that most basic prosthetic legs last three to five years, before getting worn down and in need of replacement.

Other prosthetics, like Abbot’s (which allows her to wear high heels, run and swim), can cost as much as $70,000.

The foundation has given away one prosthetic leg so far and is set to provide its second to a young girl who wants to play soccer.

Cothron ran in track and played sports in high school. He doesn’t know how he’d feel if his life changed like Abbott’s.

“She had to relearn everything,” he said. “Something that difficult would have to take a really great leader and just a good person to be able to get through that.”

By The Associated Press / 9 hours ago

Protesters carried colorful signs and sometimes shared personal stories when they gathered at the Indiana Statehouse June 25, a response to a 6-3 vote by the Supreme Court that overturned Roe v. Wade.