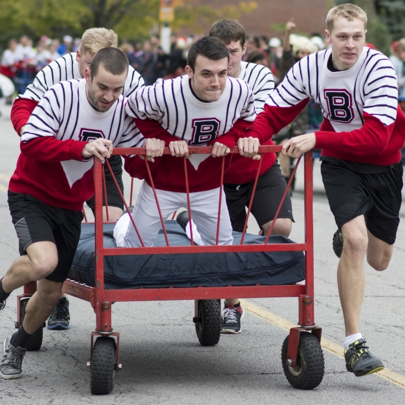 Ball State Homecoming week 2015 kicks off Sept. 28, and this year’s “Greatest Show on Turf” circus theme will be prevalent in many of the week’s events.

The first event of the week, the Homecoming Village, will feature an actual circus. The Cincinnati Circus Company will be bringing a stilt walker, palm reader, magician, aerial performer and acrobats to the annual event that takes place on Martin Street.

“We are really excited for them to perform and to see what they have in store for us,” said Catherine Burgess, a sophomore public relations major and Homecoming special events co-chair.

The Homecoming Village will also have a DJ, henna tattoos, giant pong, knockerballs and free food.

The usual homecoming events, including Air Jam and the parade, will follow the Homecoming Village. The Ball State football team will finish the week by facing the University of Toledo on Oct. 3, taking the “greatest show” to Scheumann Stadium’s turf.

Planning for the events began in February, Burgess said, and continued through the summer.

“This is a huge year for Ball State Homecoming, and we encourage people from the community and campus to come out and enjoy the atmosphere,” Burgess said.

By Miguel Naranjo / 5 hours ago

By Associated Press / 21 hours ago

Ketanji Brown Jackson was sworn in to the Supreme Court on Thursday, shattering a glass ceiling as the first Black woman on the nation's highest court.

Storm chasers love the uncertainty of the atmosphere; they love to observe the natural gifts that Mother Nature brings them. Whether the goal of their observations is for research purposes or for pure enjoyment, storm chasers consistently have an objective of discovering new things the weather carries in for them.