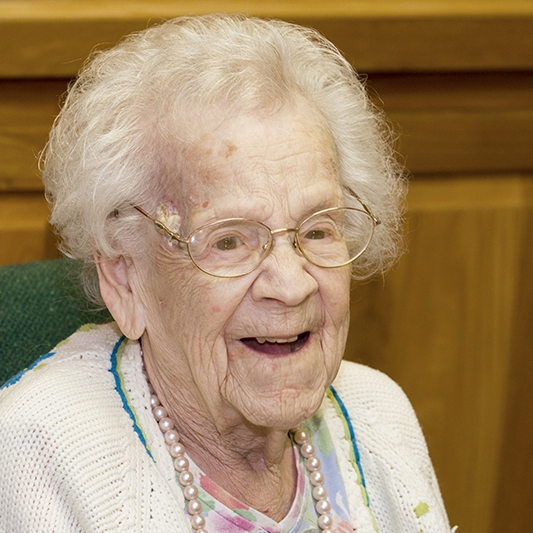 Gladys Culver, 105, lived in Lucina Hall 85 years ago. Culver had the chance to reconnect and inspire different generations of educators with her teaching career. PHOTO COURTESY OF BALL STATE

John Jacobson, dean of Teachers College, visited Culver in late June to present her with a plaque. He wanted to honor the former teacher's years of service, and commitment to the Ball State community.

While in North Webster, Jacobson spoke with Culver about her teaching career and memories she had of her experiences.

“For her to be able to share her experiences from so many years ago was a real treat,” Jacobson said.

Culver told Jacobson that in 1929, her junior year of college, she was able to hear the hammering of construction for Burris Laboratory School.

“That was really quite special to connect with someone who was there when our laboratory was being built,” Jacobson said.

Culver had good teachers when she attended school. They inspired her to go into teaching. This influence is still a driving force for aspiring educators today, Jacobson said.

Madison Hursh, a sophomore English education major, has fond memories of the teachers she’s had.

The students who have walked in Culver’s shoes over the last eight and a half decades have upheld a standard set long ago.

“This legacy we’ve had at Ball State University started way back when the institution was established and continues today,” Jacobson said.

After graduating from Ball State in 1930, Culver moved back home to teach second grade at North Webster Elementary School. She taught in the same classroom until she retired in 1972. Culver also told Jacobson of late nights creating lesson plans. She recalled spending hours working to create the best education possible for her students.

“I could still see her passion for teaching,” Jacobson said about his visit.

Culver had such a passion for teaching that she chose the profession over marrying the man she loved. Culver’s school district did not permit female teachers to be married so the sweethearts put off marriage until the ban was lifted in 1938.

“That kind of love and passion means hope,” Hursh said. “Hope for the future of education. As long as we have teachers who have that passion for their profession, the education system will stay afloat.”