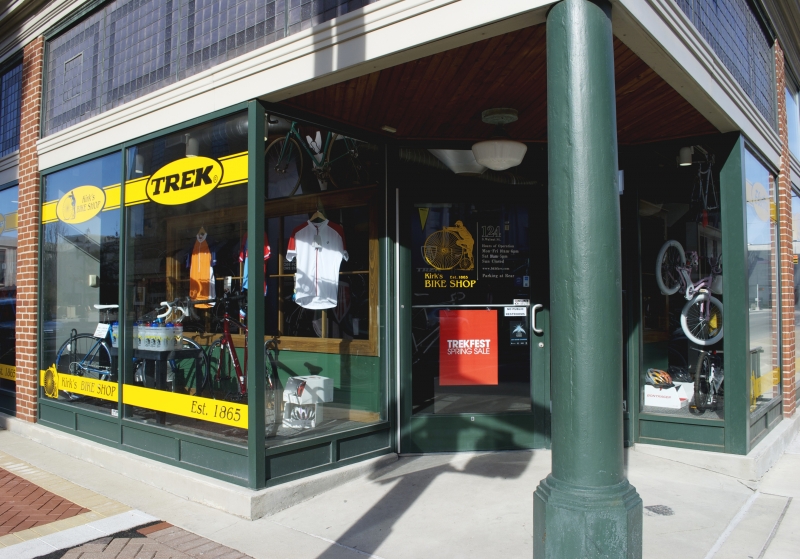 Monte Hitchcock visited Kirk’s Bike Shop for the first time as a 9-year-old in the 1950s. He came for the display sets—specifically the store’s magic trick set.

Kirk’s has been around since 1865, the same year Muncie was founded. It’s changed its original name, as well as locations and owners, but Muncie residents like Hitchcock have always been able to enjoy it.

Hitchcock said he liked coming to the store because it felt like home. During the winter, the store management would have a Ping Pong table set up and he would go there to hang out.

“It was just like going to visit your friends,” he said.

William had two sons, Charles Benjamin Kirk and E. William Kirk, who worked with him in the store. Charles and E. William took over the store after William’s death and named it Kirk Bro’s according to “The History of Delaware County Volume 2.” After E. William died in 1899, Charles became the sole owner of the store.

Under him, the store fostered a specialty sports department and continued to grow. “We sell everything but elephants” became the store’s slogan.

Kirk’s has continued to be passed down from generation to generation as Charles had two sons who both had three sons.

In 1999, B 'n B campus store, owned by Jay Allardt and Buck Fuller, bought Kirk’s from the original owner’s great-great grandson, Brian Kirk. With the change of ownership came a different name and a new location on Tillotson.

Hitchcock still visited the store, but the feeling had shifted. The store became oriented towards college students.

“I didn’t have bad feelings about it,” he said. “The Kirk’s felt like it was time to move on and that’s what they did.

Like the Kirk family before him, Allardt passed ownership of the store to his son, Jason Allardt. Jason moved the store back to Walnut Street.

Although owned by a different family, the store will share its 150th birthday with the City of Muncie on the same stretch of street and with the same family name Kirk's had when it opened.

By Staff Reports / 5 hours ago