Behind the Art: Student artists discuss meanings behind displays in Art and Journalism Building

Behind the Art explores the meaning and process behind the student-made art in our campus hallways and displays. This part of the series contains photography work featured on the second floor of the Art and Journalism Building.

Jessica Maxwell’s untitled art catches the eye and the junior photography major wants to prove why.

“The concept behind [the piece] was to bring awareness to how we subconsciously see beauty,” Maxwell said. “How we gravitate toward people who are more geometrically defined.”

Her artwork is a photo of a female profile with geometric shapes overlapped.

The piece stemmed from an assignment requiring Maxwell to layer images. The subject, however, was open concept.

Though Maxwell began creating art when she was about seven years old, she took a hiatus and came to Ball State University to major in premed and genetic biology. She soon after found out that it wasn’t for her.

“I just took a whim and got into the art department and loved it ever since,” Maxwell said.

Maxwell leaves most of her work up for interpretation. She heard a saying that stated the average person looks at a piece of art for three to five seconds. Maxwell’s goal is to keep people looking at her art for at least 10 seconds.

“I try to make my work as abstract as possible, but yet poignant and striking, so that way you linger over the piece more,” Maxwell said. 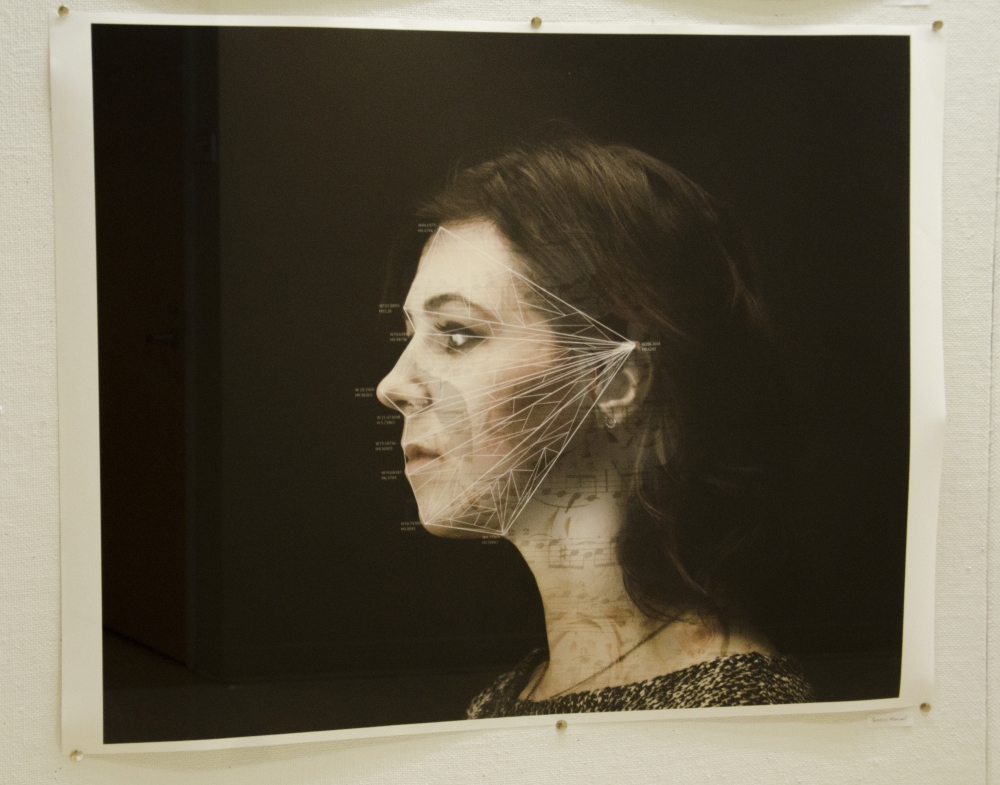 Beaches are where Sydney Patton said she has made her greatest memories. That’s why she decided to bring the sand and ocean to AJ.

Her piece of art includes seashells hanging from twine with two black and white photos of more seashells above. Small pieces of paper attached to the twine contain little snippets of stories.

Patton has been collecting memories and seashells during her beach visits for almost a decade. Patton said her shells weren’t just remnants of sea creatures but symbols of her vacation memories in coastal areas.

“Their preciousness and natural exquisiteness symbolically represent the dearness of the memories I have made at various seashores,” Patton said.

Patton said she wanted to convey that humans develop special bonds and memories to specific objects or collections.

The seashells in her art come from a collection she’s been accumulating since she was12 years old. The shells come from the shores of South Carolina, Virginia, Florida and Mexico. 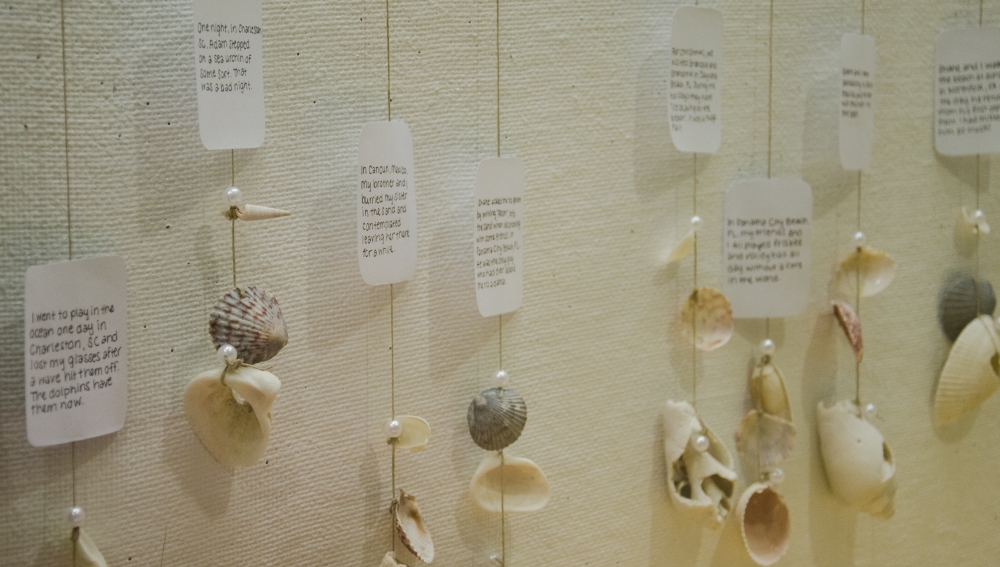 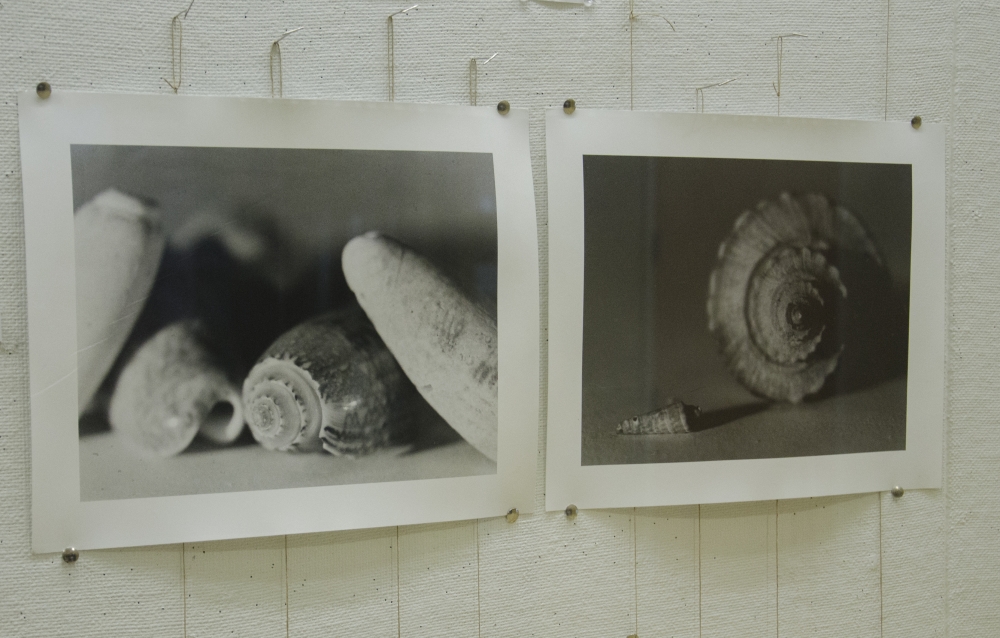 Normally, Scherry Hirschy likes humans and simplicity in her art work. For a recent photography project, however, the sophomore visual communications major switched to collecting forks.

The project assigned at the beginning of the semester required her to collect something, but she didn’t immediately know what she wanted to focus on.

“I was at dinner and I decided ‘I’m going to take this fork,’” Hirschy said.

She said she didn’t always remember to take forks, but would try each time she went out to eat.

The two photos displayed in the Art and Journalism Building hallway are pieces of a four-part photo series for the project. Hirschy said she took different photos of the forks, but she wanted to make the photos more abstract and take out the identity of the fork.

“Who wants to look at a photo of fork,” Hirschy said. “I want to make it interesting.”

She also used forks to hold the photos; she got the inspiration from photo holders for photos of children that have a “swirly design.”

“It was a way to incorporate a sculptural element with the piece,” Hirschy said.

While Hirschy is happy with the overall product, she said she would not want to do it again—it was hard to arrange the forks in a beautiful way. 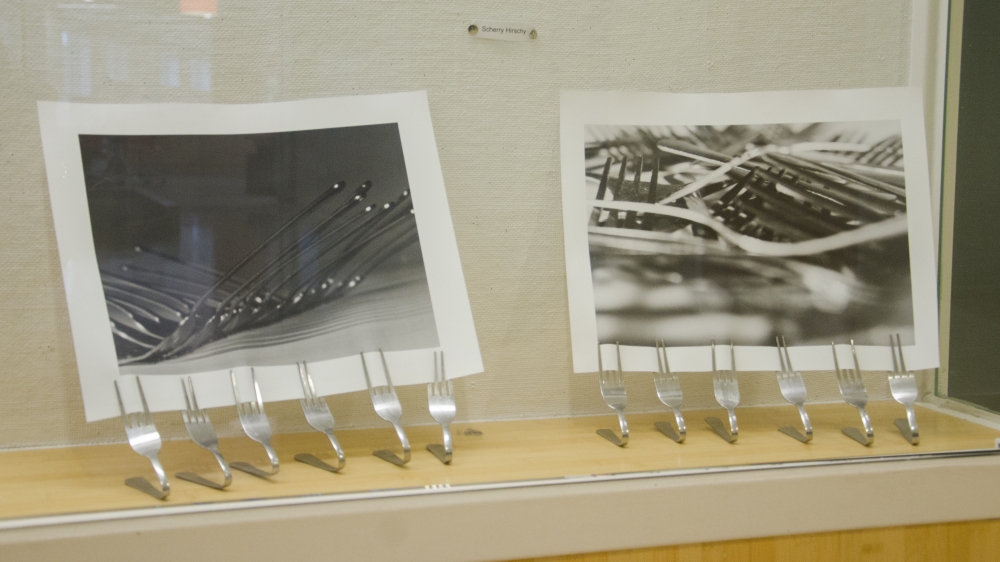 Sarah Lassiter took something often stuffed into the bottom of purses and created art by collecting and hanging up receipts as part of a film photography project.

Lassiter, a sophomore, chose receipts as her main focus because they are used everyday and offer shoppers an idea of when they were at certain locations.

“They create a map of life experiences,” she said.

While Lassiter worked on her project, she found that she was careless and unorganized, a departure from the precise and purposeful way she deals with photographs.

She channeled this by crumpling some of her receipts in a stack on the ground, like she normally would, then hung some on the wall like she would with photographs. 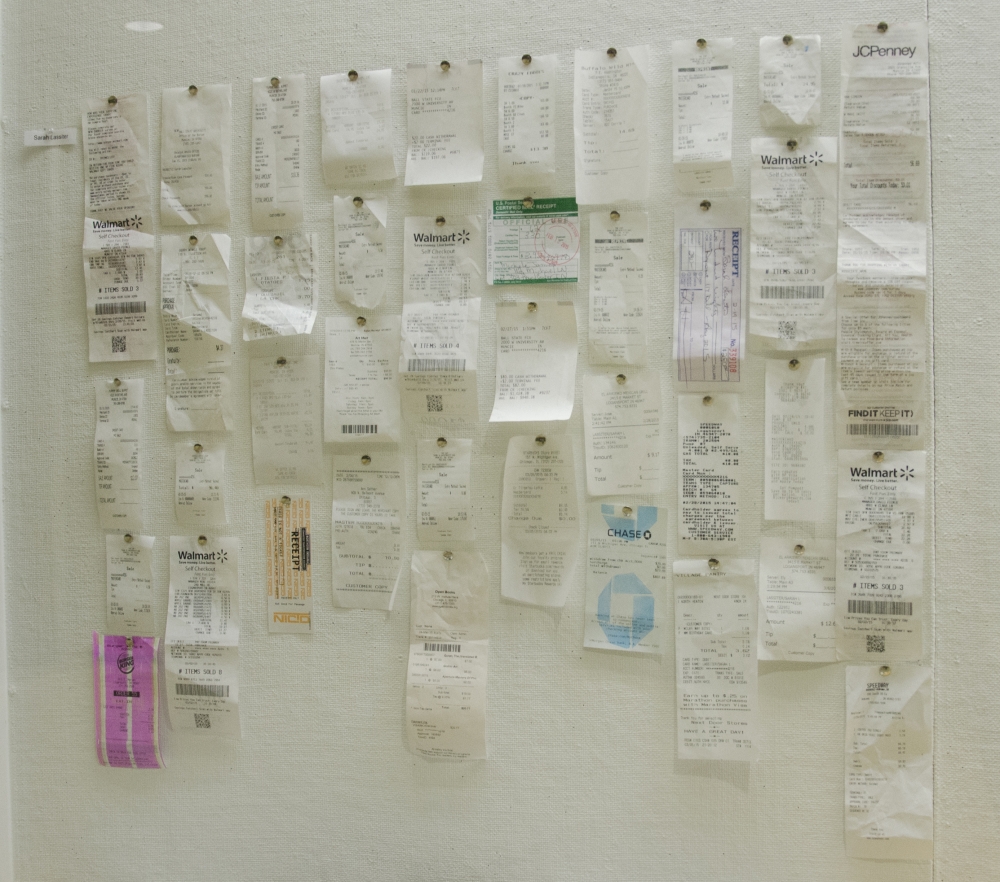 Marisa Lozano drew inspiration from her brother for two of the three pieces for her photo project.

The sophomore visual communications major wanted to represent her brother’s dreams. He suffers from ADHD, as well as some symptoms of autism, and said he always feels lost.

Lozano wanted the photos to represent a mix between the ideas of lost and trapped, so she mixed images of her basement with a woodland negative.

The other photo featuring her brother shows him aiming a gun with a negative of a nude model mixed with the photo.

She said her brother talks about wanting to shoot things, but Lozano said children don’t always realize what that entails.

“That could hurt people, I really wanted to get that across,” Lozano said.

The third photo includes a nude model with pastel paint on the image. Lozano mixed negatives to give the nude figure a grungy look from a photo of her basement.

After printing the image, she decided to paint it. Not everyone dreams in black and white, she said. She continued the dream-like theme by having the colors take over the form of the nude model, making it more abstract.

To Lozano, the piece is a “risk” and a “happy accident.” 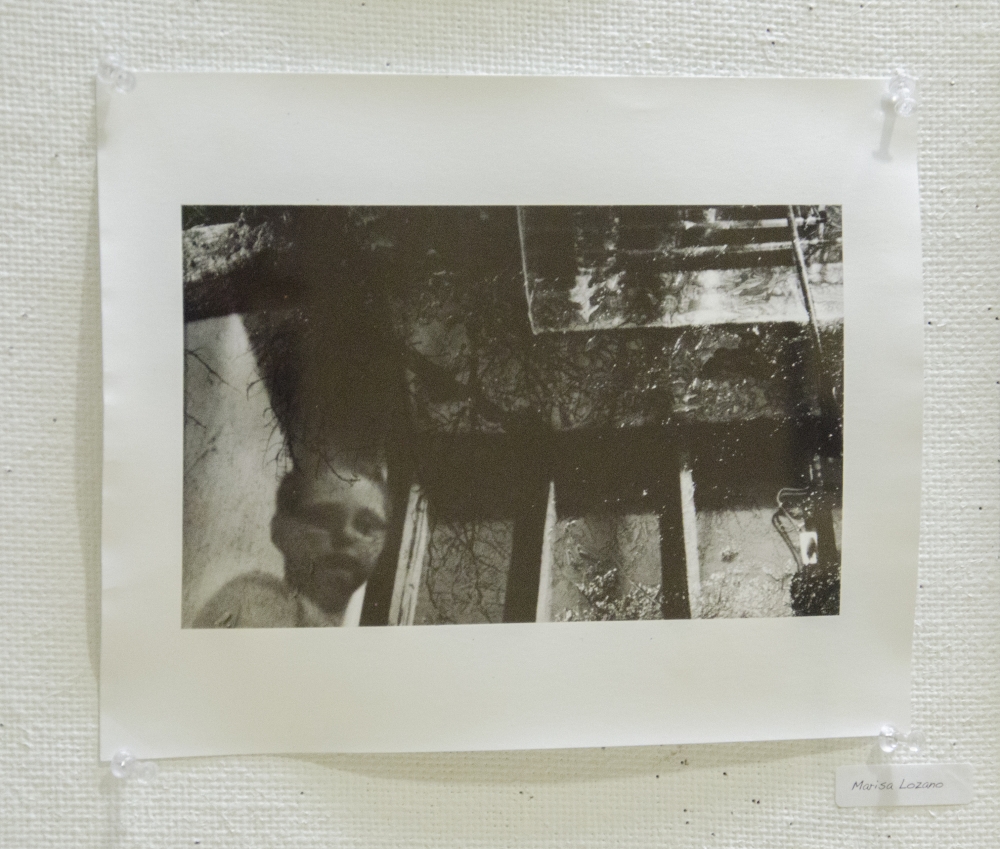 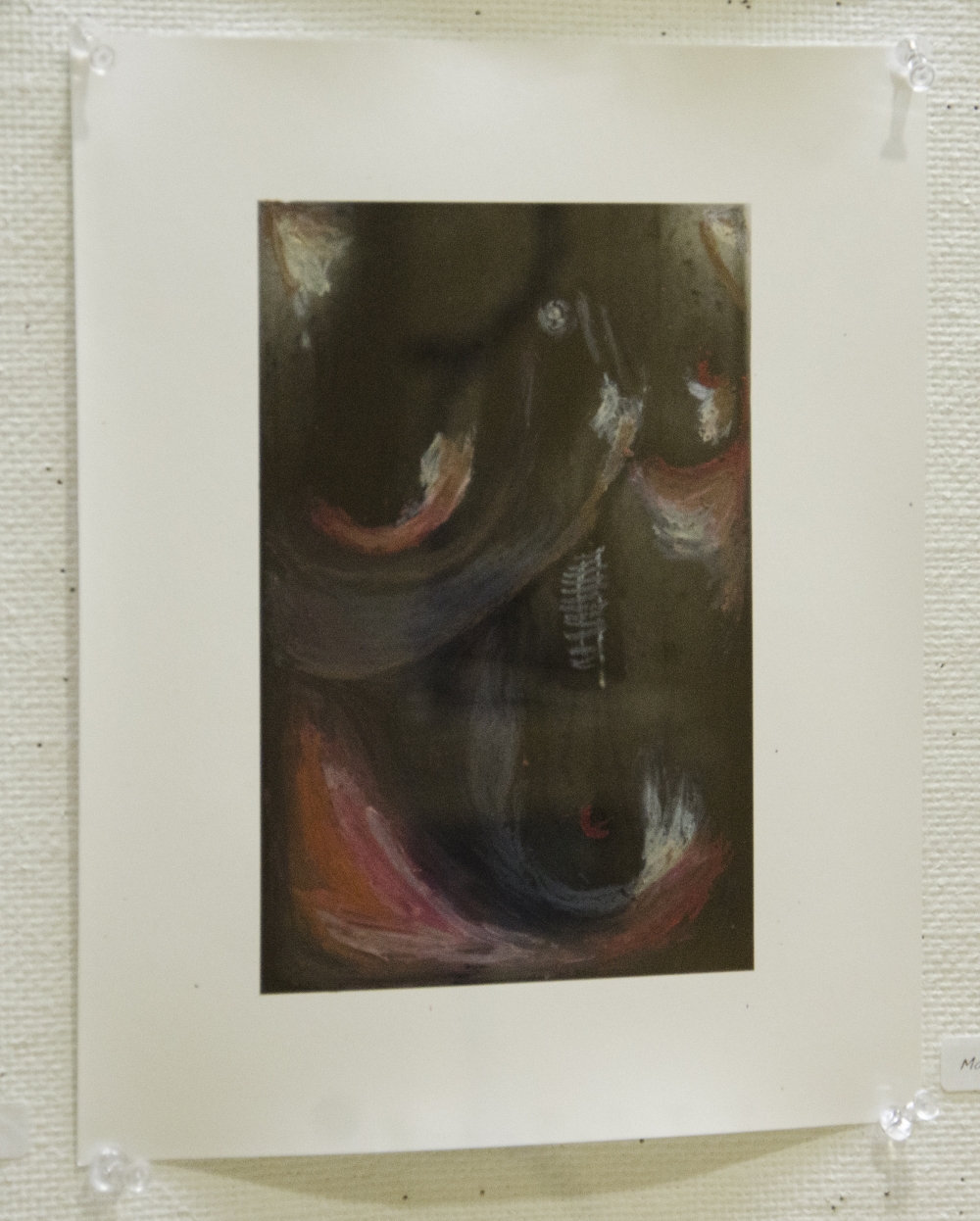 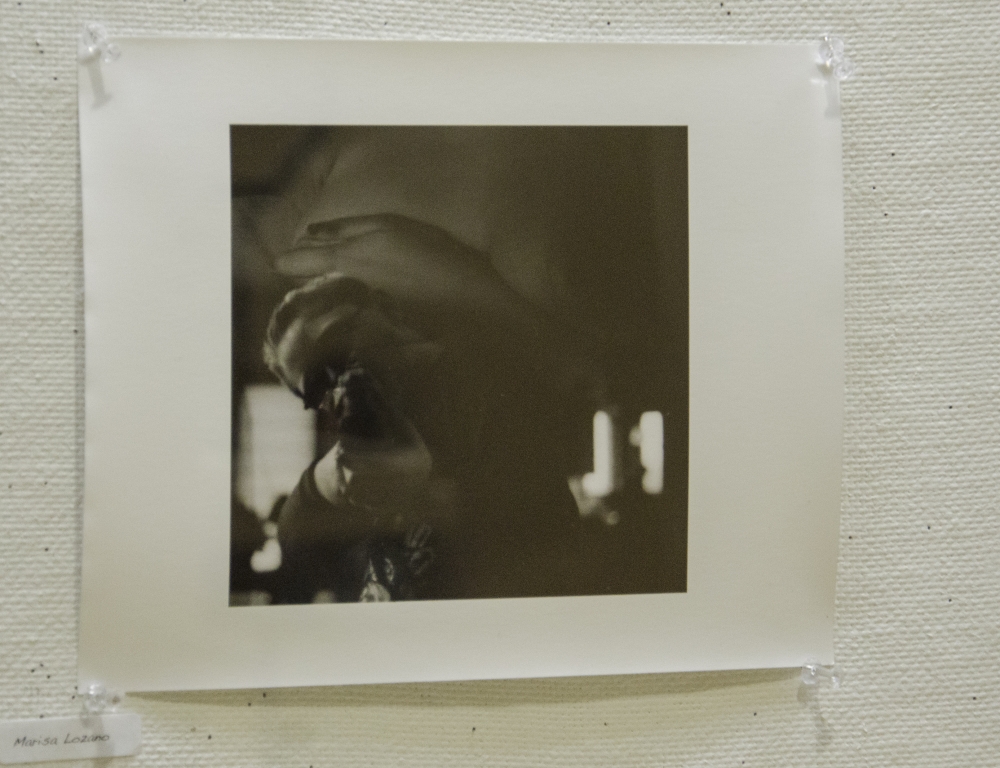 Taylor Watkins came to Ball State as a photojournalism major, but switched to photography during his junior year. Now he’s testing the waters of his new major with art projects.

Currently, two photos from the senior’s four-piece photo series are displayed in the Art and Journalism Building hallway. The class assignment was to take photos of something dreamlike.

Watkins interpreted the assignment as where he would go to dream. On Spring Break, Watkins went to Carolina Beach in Wilmington, N.C., where he took his dreamlike photos. He wanted to show “silence in the photo” so he made sure they weren’t too dark.

So far, he’s enjoyed the challenges of his major. He dropped the journalism major, saying he didn’t care for the writing aspect of it—he just wanted to take photos.

“I think it’s amazing [how] you can capture a moment,” he said. 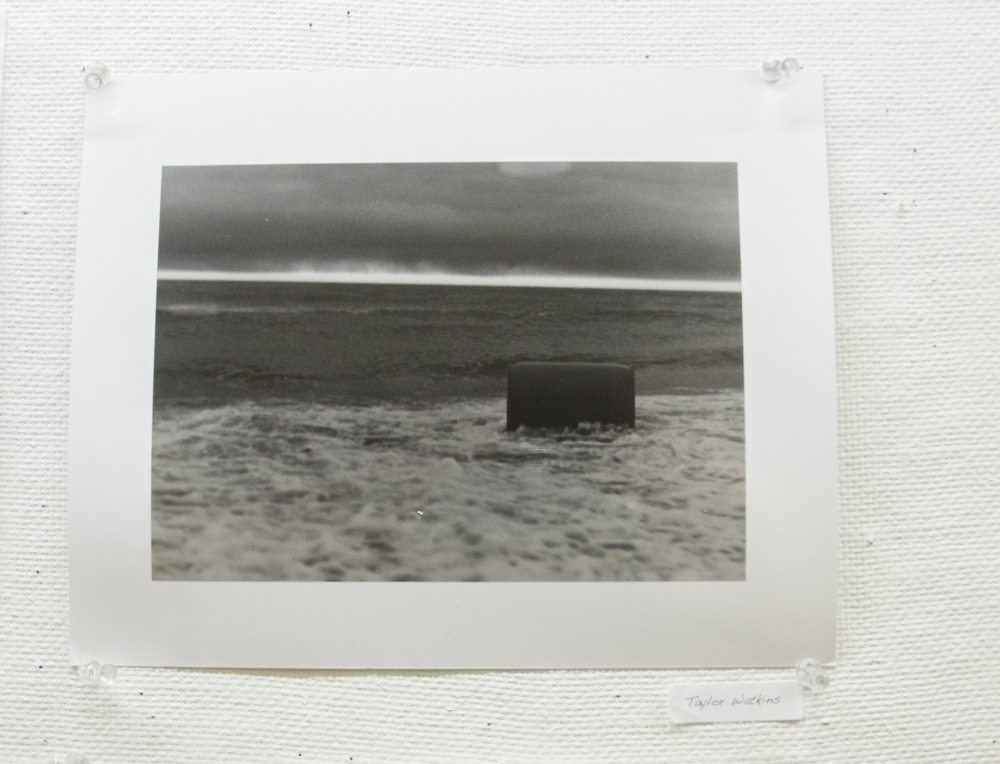 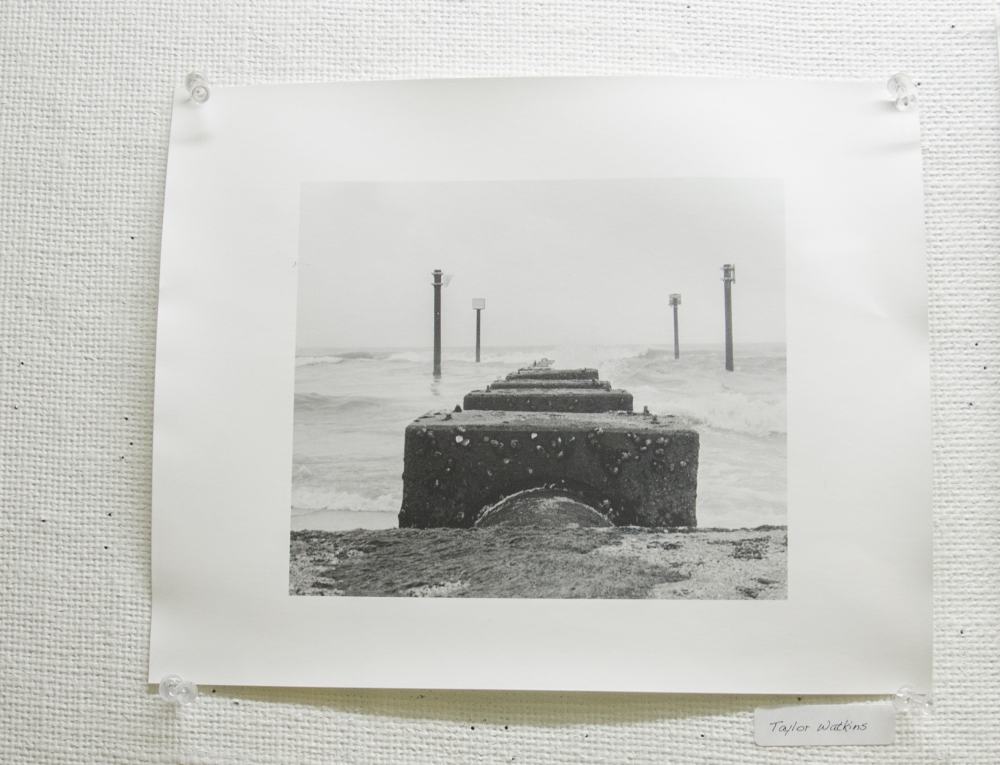