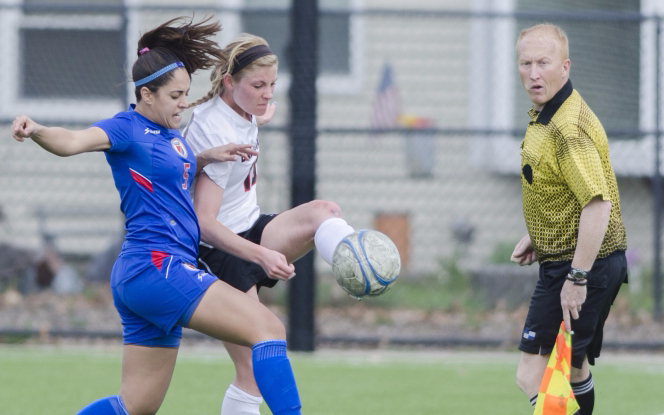 The Ball State soccer team faced the Haiti National team on April 12 at the Briner Sports Complex. The teams tied 1-1.

Junior forward Chelsy Swackhamer said the relationship between Ball State and Haiti is competitive, but the players enjoy competing against each other.

“It's a fierce friendly,” Swackhamer said. “There's times we go in to tackle with them and we'll get up high-fiving them. If you make a good play, they'll tell you, or if they make a good play we'll tell them.”

Haiti came out firing in the second half with three shots on goal in the first nine minutes.

With 21 minutes remaining, it appeared that Haiti had scored a goal, but it was called back after an offsides penalty.

Swackhamer scored the first goal of the match in the 76th minute to give Ball State a 1-0 lead.

Haiti answered 10 minutes later when Rilka Noel scored on a rebound to tie the match.

After the draw, Ball State is now 2-0-1 agains the Haiti National team over the past three seasons. Ball State head coach Craig Roberts is also the assistant coach of the Haiti national team.

He said it's good to see the two teams competing against one another.

“We look forward to every game, but obviously I've got a partial interest with coaching with Haiti as well," Roberts said. "But it's just nice to see how both programs continue to progress and improve."

Ball State has two matches remaining in their spring schedule. It will take on Olivet Nazarene on April 18 before an alumni match later in the day.

Swackhamer has some high expectations for the fall season as the spring schedule comes to a close.

“I think that we'll definitely be competing for the [Mid-American Conference championship],” Swackhamer said.