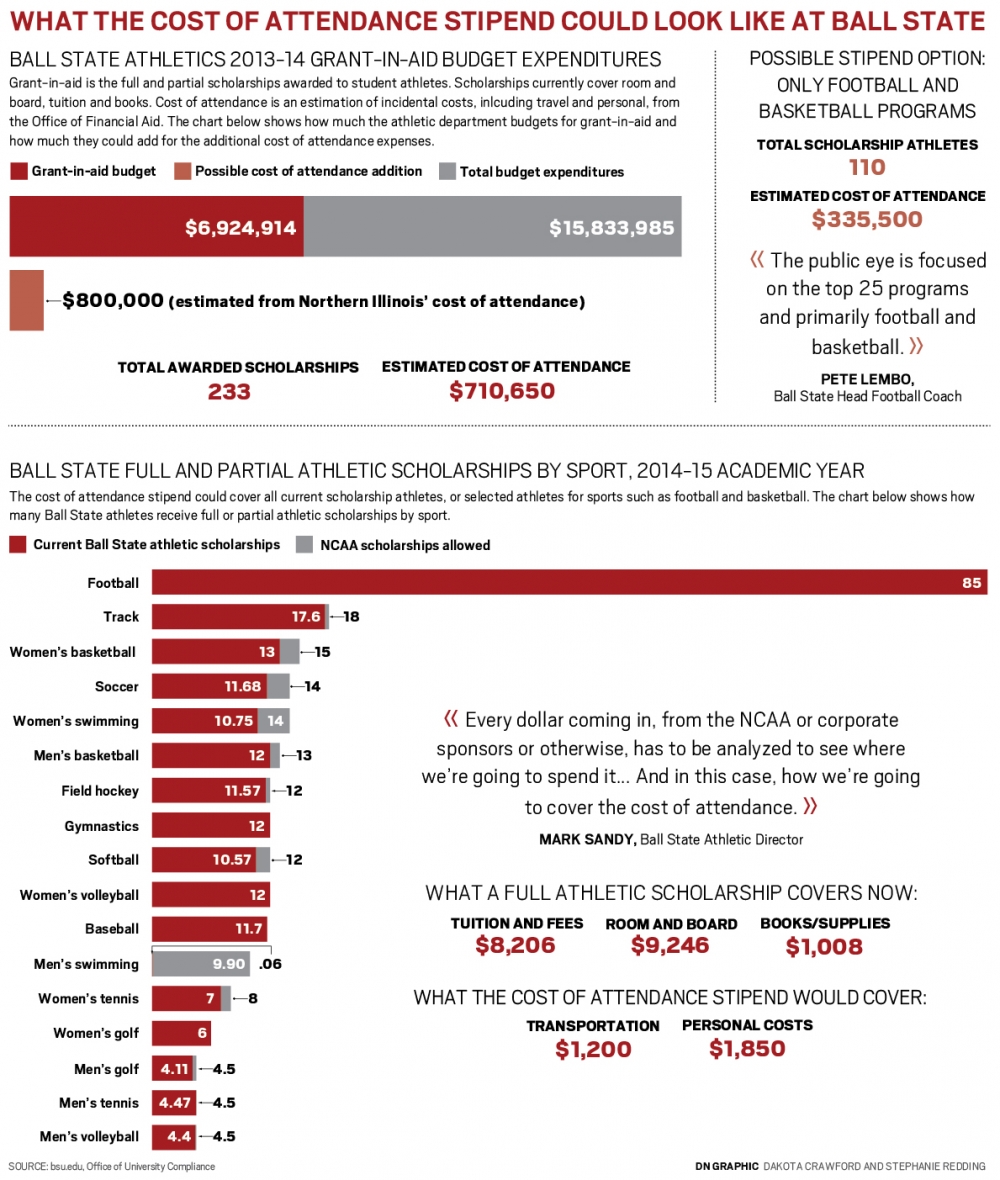 Peer pressure is going to drive a lot of athletic spending at Ball State.

Northern Illinois University announced last month that it would adopt a full cost of attendance structure within its athletic department. Beginning next academic year, every scholarship athlete will receive a stipend in addition to room and board, tuition and book costs.

Athletic director Mark Sandy said getting cost of attendance figured out at Ball State is near the top of his to-do list. In many ways, the decision to implement this stipend to help athletes with incidental costs was made for him.

“If your peers do it and you don’t, then you’re in trouble,” Sandy said. “You have to compete.”

If Ball State chose not to provide the cost of attendance stipend, it'd lose recruits to other Mid-American Conference schools. Top high school players will be more inclined to play for college teams that offer them some pocket cash.

Sandy was working around these issues during his last job as athletic director at Eastern Kentucky, too. The biggest difference is now he’s got about $7 million more in buying power. Despite Ball State’s larger $20 million budget, providing stipends to more than 200 scholarship athletes is going to be costly.

Sean Frazier, associate vice president and director of athletics at Northern Illinois, said the expected cost for their department is at least $800,000. That’s about what Ball State is looking at as well — assuming an effort is made to keep up with the fellow MAC school.

Thanks in part to a television deal between ESPN and the conference signed last year, member schools including Ball State can afford the extra costs. Sandy said there is still going to be some tightening of the belt, though.

“Every dollar coming in, from the NCAA or corporate sponsors or otherwise, has to be analyzed to see where we’re going to spend it,” he said. “And in this case, how we’re going to cover the cost of attendance.”

Until the early 1970’s, student-athletes often got extra cash on top of their scholarships to help with personal expenses. Sandy said cost of attendance is just another version of what was once called "laundry money."

The idea is to provide a $2,000-4,000 stipend, which will vary from school to school, to help athletes cover living costs — primarily those incurred through travel. This is particularly important for out-of-state athletes like Ball State running back Jahwan Edwards. If an athlete has to make a trip home, they usually have to pay out-of-pocket.

Some critics of cost of attendance say it will deteriorate the amateurism that has long been a foundation of college sports. Paying athletes makes college sports a job, instead of a way to get an education. Ball State football head coach Pete Lembo believes in the notion of amateurism — but says it can co-exist with this new system.

“To have at least some expenses covered for transportation and the odds and ends that every college student is inevitably going to deal with,” Lembo said. “If it can be provided from a resource standpoint, that’s probably the right thing to do.”

What can’t be provided is a pay-for-play model where athletes get paid more if their program generates more money. Nebraska, Texas, Michigan — the big-time football programs — could pay players more than will be offered through the cost of attendance stipend.

Ball State’s athletic department doesn’t bring in enough money to cover its own costs. It collects about 70 percent of its income from student fees paid in addition to tuition. That’s a problem throughout the MAC.

“There is so much more to it than [what's in] the public eye,” Lembo said. “The public eye is focused on the top 25 programs and primarily football and basketball.”

MAC commissioner Jon Steinbrecher announced in August that a task force was assembled to research various cost of attendance models. The same competition that drives these decisions within the MAC exists among conferences, too.

It’s all about keeping up with peers.

“While we do not know at this time what the actual legislation will look like, the [MAC] intends to remain a strong and vibrant FBS conference, committed to competing at the highest level,” Steinbrecher said in a statement. “Our membership will be prepared to address this issue."

Now MAC universities are ironing out the wrinkles. They have to establish what sports will be covered, they have to set a dollar amount and they have to figure out how to fund it. Since Northern Illinois committed to funding scholarships for every sport — Ball State likely will too.

The total cost of attendance is based on numbers from the financial aid office. Ball State’s estimated cost of transportation is $1,200 and personal cost is another $1,850. That comes out to $3,050 which, when provided to 233 scholarship athletes, comes out to $710,650 — which is in the neighborhood of the total Northern Illinois said it expects to pay.

Conferences have to make sure that the amounts paid at each university aren’t too far apart, though. It’s not fair to have one university offer far more than another because that too will throw a wrench in recruiting efforts for the school with less money to offer.

Jeff Smith, a professor at the University of South Carolina Upstate, said the biggest schools are going to have to start providing compensation for their players in the future. He's done extensive research on spending in college athletics, and said this kind model would require changes.

“The football at these schools make a tremendous profit,” Smith said. “But they are supporting other sports that don’t make any money. Financial models there are going to change.”

The smaller programs that don’t make money — such as lacrosse, soccer and hockey could be cut, or stripped of scholarships — to make way for those that do generate profit. The NCAA's decision to adopt a cost of attendance model is just one step toward a pay-for-play model.

For now, schools are doing what they have to do to compete with their peers. And for Ball State, that's adopting a cost of attendance stipend.

“It’s a much more palatable number,” Lembo said. “In the big scheme of things, it's probably not all that much relative to a department that’s got a $25 million budget or something like that.”

Five gym etiquette rules to follow when working out

With 52 percent of Americans’ New Year’s resolutions being to exercise more, according to Statistica, and 12 percent of new gym members starting in January, according to RunRepeat, gyms have been filling up. This means new people to fitness centers, some who don’t know the “unwritten rules” of the gym. Here are five rules of gym etiquette for all those visiting the gym.

The Burris Owls have now won their last four games. Their latest victory was this Friday night’s matchup against the Seton Catholic Cardinals. The red-hot Owls defended Ball Gymnasium as they soared past the visitors 48-32. But this win was special for the home team for a few reasons. First, it was homecoming week. Second, this is the same Owls team that started the season 0-8.