'Feminism is for everybody': feminist publications and their focus 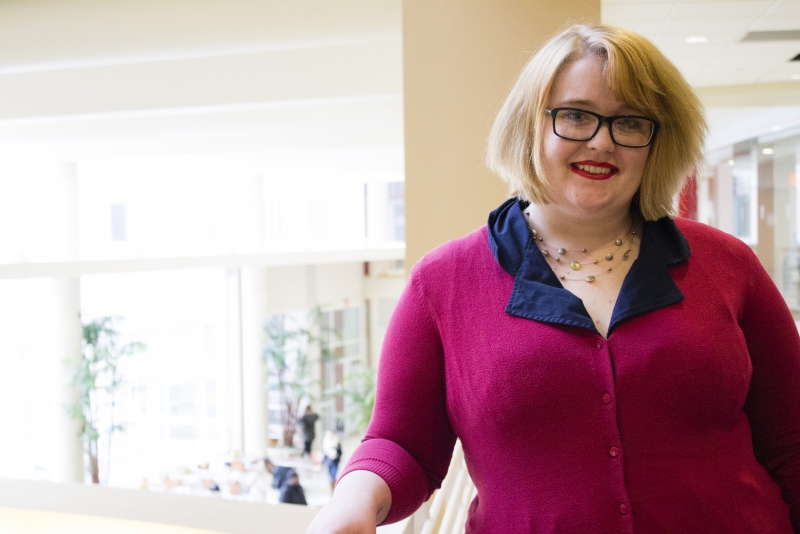 Rebecca McNair, a senior creative writing major, and her husband Zach are launching a feminist literary magazine called “Andromeda Speaks”. Rebecca decided to do magazine because of some classes she is taking, one of the classes is women and gender studies, which broadened her definition of feminism. DN PHOTO ARIANNA TORRES

A simple Google search for “feminist” brings up the expected results: a definition for feminism, an organization or two, but things start to take a turn with the Facebook page for Women Against Feminism and a series of blog posts exploring the “problem with feminism.”

Rebecca McNair, a senior creative writing major, thinks this needs to change. She and her husband Zach McNair decided to launch a feminist literary magazine called “Andromeda Speaks” to do just that.

A literary editing and publishing course and a Women and Gender Studies class inspired Rebecca to start her project.

“I was wondering, how can I take what I learned here as an English major, and give back to the world?” Rebecca said.

She bounced ideas off Zach for a few months before settling on a print-only magazine.

Rebecca found several magazines that covered the subject of feminism, just not in the way she had hoped. Some only targeted older audiences or just accepted submissions by women.

“The magazines that were similar to my idea hadn’t been active in a few years,” she said.

Rebecca said she wants to re-brand the word feminist with her publication.

“In general, most feminists strive to create a more equal and just society where people's voices are valued and considered in government policies, legal civil rights and human rights,” Rosser said.

Zach has his own list of words that he’d like to see die off. He mentioned feminazi, but also threw in bra-burner and man-hater.

Trevor Nantais, a senior women and gender studies major, said “Andromeda Speaks” might show others that feminists are more than the words used to stereotype them.

"These labels are negative because it makes people who identify as feminist seem to all be radicals,” he said. “If I were to say “I am a feminazi,” people would think that I am trying to kill men off the earth. By having these negative label, it makes it hard for folks to take us seriously."

Rebecca has other goals for her magazine, some of which are hinted at in the name she chose for her publication.

She based the name off the male-centric perspective of Greek mythology.

The daughter of a king, Andromeda is chained to a rock before being saved by the hero Perseus, according to Myth Encyclopedia.

Despite being sacrificed to save her kingdom, Rebecca said Andromeda never gets to share her perspective in the myths.

“I thought that it was really powerful and important to pick a woman who is literally in chains and whose name means ‘to think about men’ and then give her a voice,” Rebecca said.

Rebecca hopes Andromeda’s voice will be heard in the future contributors to the magazine.

“We’re looking for anyone who has something to say about the notion of being a woman,” she said.

“Anyone” includes writers of all ages, races, gender identities and sexual orientations.

“We are so straight, white, male. If something in society is not straight white male, it’s labeled in some way. It’s not always derogatory but it can be,” Rebecca said.

The money raised will go toward purchasing an online submissions manager, hiring editors and blind readers as well as paying for materials and guest writers.

The magazine will then begin looking for submissions in September to be published in its first issue in December.

If the Kickstarter is unsuccessful, Rebecca and Zach have a back-up plan that involves moving the magazine online.

That's an undesirable alternative for Rebecca: she hopes that the magazine will be published solely in print twice a year. That's the medium Rebecca said will reflect her and her brand of feminism the best.

By Associated Press / 23 hours ago