The TARDIS Has Landed At Ball State 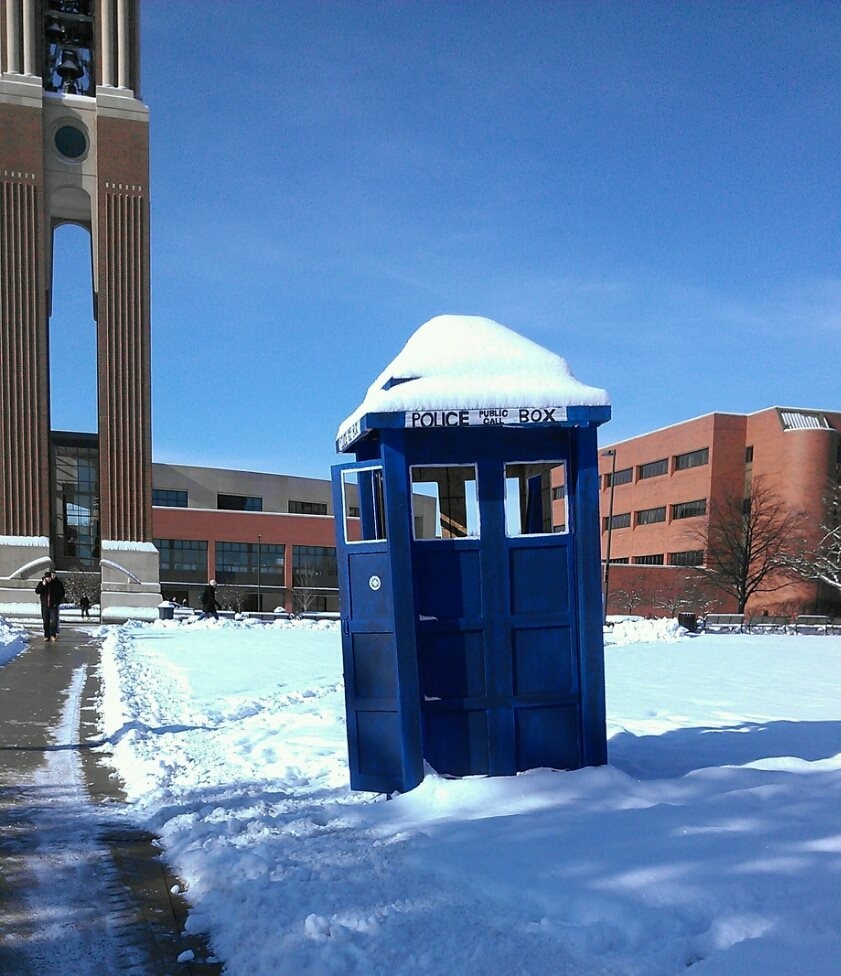 If you spotted a blue police box sitting in an open field next to the Bell Tower, you are not going crazy. It really is there.

TARDIS (Time and Relative Dimension in Space) is the actual name of the box, the ever-so-famous time machine from the popular BBC show Doctor Who.

But just how did this time machine make its way to Ball State? And who were the masterminds behind the creation?

Freshmen Austin Zimmerman, Adam Borchers, Matt Harrold, Chris Marsh and Kyle Wooldridge are the talented creators of the TARDIS. All five are Theater Design and Technology majors at Ball State.

All members of the group except one are huge Doctor Who fans, so building it and seeing it come to life was exciting for them. Zimmerman also said that they’re excited that their fellow fans are proud with their creation.

“I’m glad my fellow Whovians can enjoy it as much as we do,” Zimmerman said.

By using all the techniques they had learned throughout the semester, and with a little convincing from other group members, the TARDIS was born.

The group worked on the TARDIS for five weeks near the end of the 2014 Fall semester on campus in the scene shop of the Arts and Communications Building.

“It was a very quick period of time to be honest. almost like we all were blinking,” Zimmerman shared. “As a college student we procrastinated for like two weeks. In reality, it took about seven days to construct it.”

Procrastination or not, the handmade blue box definitely grabbed a lot of attention on campus.

But landing the TARDIS was not the easiest task to accomplish. Removing the roof and lifting the rest of the box just to get it out off the loading dock was the hardest part. However, they did install wheels at the bottom to make moving it to the final location easier.

Because the group didn’t know whether or not they could get permission to place it outside on school grounds, they kept that secret to themselves. Once they received permission they immediately chose the University Green, a wide-open, popular spot that would allow everyone to see. Plus it looked like the perfect place to land the TARDIS.

“If the Doctor was to actually park at BSU, I like to think it would be there,” Zimmerman explained.

By Lauren Clark / 2 hours ago

DWNTWN Muncie recently launched its newest campaign, “Embrace the Original,” focusing on bringing attention to the local businesses, restaurants and trails Muncie has to offer.