Indie Spotlight: No Time to Explain 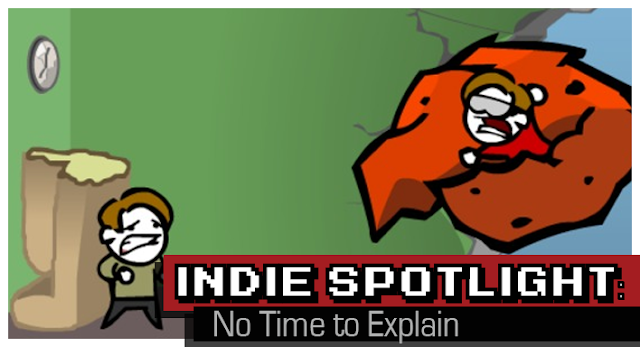 There’s no time to explain, but this game is really worth buying!

Okay, maybe that was a bit of an overstatement. I have some time, so allow me explain.

No Time to Explain is a 2D platforming game about time travel developed by tinyBuildGames. It was originally available through Newgrounds, but eventually got a full Steam release on PC, Mac, and Linux.

The game stars “You”. While you are home one day, a man bursts through the wall. “I am you from the future!” he proclaims “There is no time to explain. Follow me to-” he is quickly cut off and captured by what appears to be a giant crab claw. As he’s whisked away, he drops a lasergun-jetpack-future thing, and the game begins.

Right from the start, it’s clear that this will be an obviously bizarre adventure, and that was only the first ten seconds of starting a new game. From this point on, things get weirder and weirder. Aliens, cyborg-dinosaurs, sharktopuses (sharktopi?), alternate dimensions and more get involved in this tale, and just when you think that there might finally be enough time to explain, something even more convoluted gets thrown in your face. The goal of the game is to get to point A to point B, but it isn’t as simple as that; No Time to Explain is a seriously punishing platformer. You are free to walk and jump around, using the various weaponry you pick up to aid you. The staple of your arsenal is the jetpack-lasergun. Firing it creates a powerful beam that can be used to levitate and direct the player. As the game progresses, the player will obtain different tools to use. A single-shot canon and psychic powers are among many abilities that will be acquired over the course of the game. Environmental elements also factor in, ranging from destructible blocks and bounce pads to deadly fire and edible cake that makes you heavier.

With all of this, players have to navigate tight, tough obstacle courses. Precision is necessary, and the game can be unforgiving. Falling out of the stage and landing on spikes will be the main cause of death. Upon death, players will respawn at the last point the player was touching solid ground. In some cases, this will mean restarting entire stages.

Each level is composed of smaller stages, each stage containing one puzzle. The objective is simply get from the start of the stage to the portal at the end. At the end of each level is a boss battle, which are creative, combining both the silly story elements and different tools at your disposal to make some really exciting fights. 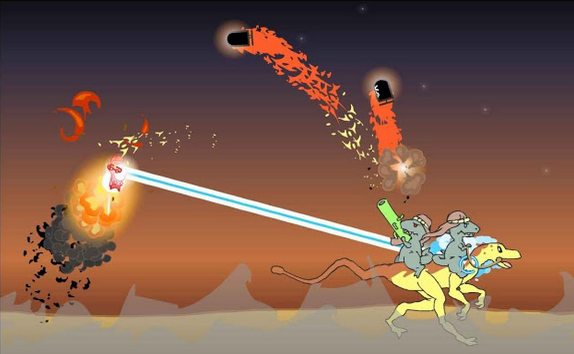 The game is a lot of fun. The outlandish story and solid gameplay work well together, and the difficulty is trying at times, but usually fair. You know when you made a mistake, but that just makes completing the levels that much more rewarding.

However, the game is far from perfect. Dying comes with no real penalty. There are no lives, meaning the player can respawn as much as he or she wants. While this is okay for the platforming segments, because otherwise it would be insanely challenging, it makes the boss battles laughably easy. The majority of the time, standing still and continuously firing up will beat most of the baddies. Which is a shame, because this waters down some otherwise unique portions of the game.

The battles are not a major portion of the game though, so while disappointing, they do not detract that much from the overall experience. It is a silly, nonsensical, and paradoxical, and I mean that in the best of ways. The main mode is enjoyable, and collectible hats and a level editor (with publishing capabilities) mean there is a reason to keep coming back for more. No Time to Explain is easily a romp worth five bucks and at least some of your valuable time.