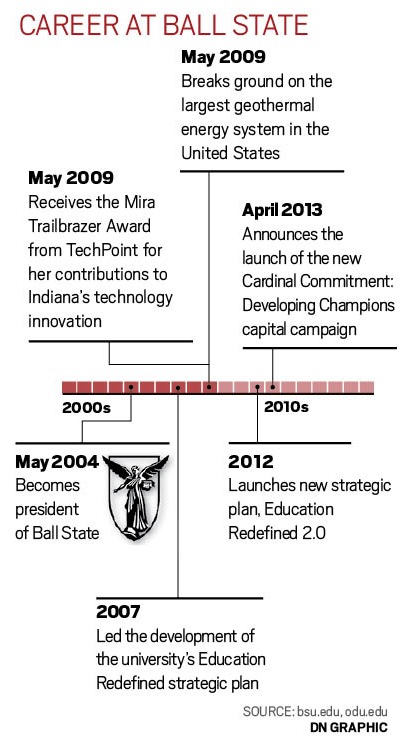 Ball State President Jo Ann Gora, 66, one of the university’s most prolific presidents announced plans Saturday to retire next summer.

“This has been a difficult decision,” she said in her email to students and faculty. “It has been a privilege to serve as Ball State’s president, and I have thoroughly enjoyed my 10 years here.”

The university’s Board of Trustees has begun discussing the search for a replacement, the email said.

President Gora and the trustees are unavailable for comment.

Gora was in French Lick, Ind., at a retreat with the Board of Trustees. Trustees had been there since Thursday.

Kyle Pierce, the student member of the Board of Trustees, said her meeting with the board was a celebration of her time at the university and didn’t focus on her plans for the future or replacement.

He said he will be a part of the hiring process, with the rest of the board, but he will miss Gora.

Gora’s original contract would have expired in August 2009, she then received an extension to stay with the school through June 2012. Her current contract was set to run through the 2016-17 academic year.

According to the Associated Press she has averaged a more than $436,000 salary over the past nine years.

According to a press release, during her tenure at Ball State she oversaw two long-range strategic planning processes and more than $520 million of facilities construction and renovation was undertaken.

“Dr. Gora has taken Ball State far and leaves the university headed in the right direction,” said Hollis Hughes, president of the Board of Trustees. “We are confident that the position will attract a strong group of candidates and that the next president will provide continuity by building on that momentum.”

By Alex Almanza / 2 days ago

Imagine receiving a $365 electric bill for a three-bedroom house. That's what two Ball State students say happened to them when it came time to pay their bills.

By Annie Keister / 2 days ago

Rain or shine, members of the Lambda Beta Chapter of Phi Beta Sigma will be outside Friday until 8 a.m. Saturday for their annual 24-hour-sleepout. It's called "Sleepout for the Homeless".