Thursdays are travel days for the Ball State softball team as it prepares to play three-game series, with games on Friday, Saturday and sometimes even Sunday.

For freshman softball player Kennedy Wynn, travel days are ones she enjoys. Even though they’re exhausting, she gets to be around her team and get homework done.

Still, there are certain measures a college athlete needs to take before traveling for road games.

“You gotta make sure you’re eating,” Wynn said. "There’s some times in the morning where I don’t get to have breakfast just because I’m rushing or doing things like that … you just gotta stay on top of everything. Scheduling is so important.”

Getting used to the schedule of a college student-athlete hasn’t been easy, but Wynn is learning time management and planning skills. Those skills include planning her day in hours and sometimes even minutes.

Wynn took 17 credit hours during her first fall semester. She was told that was a lot, and the busy schedule of classes, workouts and volunteering was something she had to get used to quickly.

“I had to figure out how to plan, how to manage everything and just in that first month … I had to get used to it and it wasn’t the easiest, but I ended up doing it,” Wynn said. “I’m still working on it now; hopefully I can master it next year.”

Student-athletes are required to have one off day per week. Sometimes, that off day will be on Mondays.

For Wynn, Mondays entail three classes and lots of homework because she knows she won’t have as much time later in the week because of practices. On Wednesdays, Wynn will go straight from class to quickly grab food before practice.

If that wasn’t enough, student-athletes are also required to complete four study table hours per week.

“I don’t want to get stuck with having to leave for a competition and not having all of my study table hours completed or possibly not even having some of my homework that I needed to get complete before that weekend,” Wynn said.

Finding reliable Wi-Fi is also a risk Wynn doesn’t want to take on the road.

“There’s a possibility that you won’t have Wi-Fi on your travel days, sometimes the hotel might not have a good Wi-Fi source,” Wynn said. “It’s just iffy sometimes.”

Since she was 8 years old, softball has been part of Wynn’s life and focusing on grades is something she started at an early age. 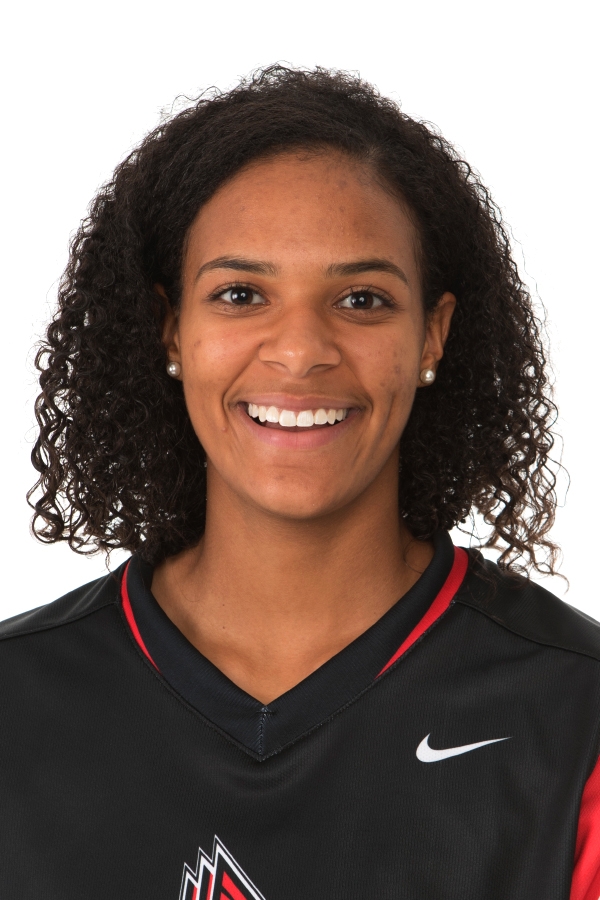 One of her first softball coaches, Scott Castleberry, taught Wynn softball mechanics and built on the knowledge Wynn’s brothers and father taught her about the game.

“At an early age, [our coach] got into our minds thinking that we could get scholarships, we could come to a big school that we’ve always wanted to,” Wynn said. “I think just loving the sport that much and having a coach who was so enthusiastic about wanting us to do great in life and do great at our sport really helped and that’s when I just knew ... I think that happened around middle school.”

Growing up, she played baseball and wiffleball with her two older brothers and remembers ESPN always being on TV and watching it as she folded laundry.

She originally played soccer and softball and loved the two sports equally but eventually, her parents made her choose one sport.

“I had some friends on that softball team when I was younger and they were awesome,” Wynn said. “The families were great ... so I decided to stick with those girls and we played with each other all the way up ‘til we went to college.”

Scott Castleberry’s daughter, Taylor Castleberry, was on Wynn’s first travel softball team and will join her next year as a Ball State softball player.

At Ball State, Wynn is a utility player, meaning she can play in different positions. She often plays in right field but can also play third base, left field or infield.

Megan Ciolli Bartlett, now Ball State’s head coach, heard about Wynn when she was the assistant coach at Purdue.

After watching her play a game with the Louisville Lady Sluggers-Dobina 18U team, Ciolli Barlett asked then-Lady Sluggers coach Don Dobina to tell her about Wynn.

He confessed that she signed with Ball State then-head coach Tyra Perry the night before.

“I’m like, no way. I got to see her the next morning and she was really committed here [to Ball State] so of course I shook coach [Tyra] Perry’s hand and was like dang, she got a good one,” Ciolli Bartlett said. “Then here we are a year and a half later, and now I get the head job at Ball State and I’m recruiting her. I just feel like in some way I was meant to coach that kid … Kenny’s just one of those special kids that you’re just excited you have her for four years.”

Wynn attributes her success to the people around her and the drive to finish and be successful, particularly her parents, who frequently attend her games and even traveled to Florida for the team’s Spring Break tournaments.

“[They] got to see every single game, it was awesome ... I was so happy they could attend and come out and support me,” Wynn said. “Some people don’t always have that, and I get that all the time. I’m really appreciative of that.”

Softball, and the people she’s met through it, have also taught her life lessons that she carries through today.

“Softball’s been everything for me — it’s been a stress reliever, it’s been a place where I could go have some fun.” Wynn said. “Even now, the career I have chosen and what I want to pursue in life [has] softball all over [it].”

Wynn wants to be an occupational therapist and loves taking care of people. She looks forward to her career after Ball State — and hopefully scheduling time to have breakfast.

Rain on the way with falling temperatures

Weather Forecaster Kerstin Cox tracks our next rain chances and a fall-like forecast coming up this week.

By Maddi Johnson / 19 hours ago

Chief Weather Forecaster Maddi Johnson is tracking mild temperatures, our next rain chances, and a cool weekend ahead for Ball State's Homecoming Weekend.