A “Pow!” sign hangs in Aw Yeah Comics on March 17. The shop is full of comic references such as this. (Briana Hale // DN)

With everything from a Lego set of superheroes on the cashier table to Yoda from "Star Wars" gazing down from on top of a bookshelf, Aw Yeah Comics has an eclectic collection of comic books and pop culture memorabilia.

Amidst the books, action figures and other merchandise, there is a small table with chairs and a sofa. For Christy Blanch, having these sitting areas adds to the homey atmosphere she wants to create in the shop.

“I’ve found my home here,” she said. “That’s what I try and make it for everybody that comes in here, that they feel like it’s very homey and comfortable and like a big family."

Her entry into the comic book business came when a former shop, Alter Ego Comics, was struggling to stay open. She and her then-husband decided to invest and co-own the shop.

‘‘I did not want to live in a town that doesn’t have a comic shop that I love,” Blanch said.

Eventually, the owner of Alter Ego Comics left and in 2015, Aw Yeah Comics was born. 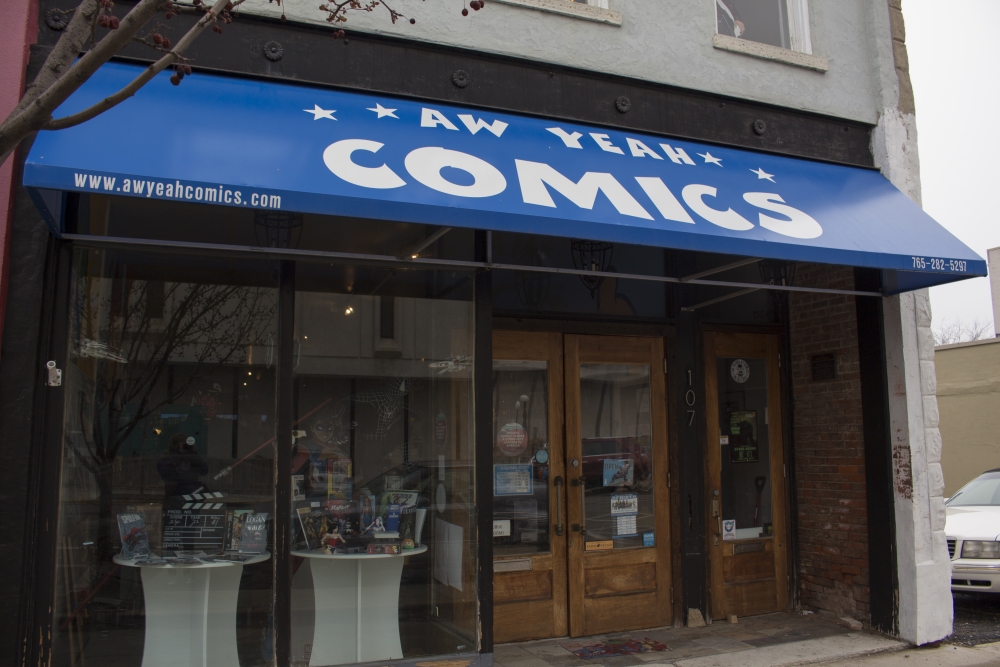 Originally a small 800-square-foot shop on Adams Street, it's now situated on High Street and is about twice as large, with an upper floor filled with back issues of comics.

Blanch’s love of comic books stems from her childhood, when she came across "Prince Valiant," a popular comic strip by Hal Foster that began in 1937. She was hooked and continued on to find other classic names such as "Wonder Woman" and "Spiderman." It was "Star Wars" that left the biggest impression on Blanch.

“When Star Wars came out, it just solidified my geekdom,” she said.

Her daughter, Grace Blanch, helps out in the shop. She, too, has a great love for comics. The shop is where she can interact with others who share the same interests as her.

“Here you can come and you can talk to us about anything. We’re like, ‘Oh yeah, that was so awesome,’ and then we’d have a 20-minute conversation with you about it,” Grace Blanch said.

To her, with comic books, there is something for everybody. She recalled how her friend wasn’t into comics because he thought they were all about superheroes. However, when she introduced him to a horror comic book, he was hooked.

Steve Steiner, a first-time customer from Cleveland who was visiting his parents in Muncie for a few days, was filled with enthusiasm when he walked into Aw Yeah. He found the shop through an online search.

“I don’t think it’s quite like any place I’ve ever been. Walking in, it kind of explodes. The music, the smells,” he said.

For Steiner, comic books provide an escape from the stresses of everyday life. He loves the variety of methods used to tell the stories and how familiar stories are reinvented in later comics.

“Definitely gonna buy something,” he said without hesitation, three books already in hand.

As for Christy Blanch, she has no plans of getting out of the business any time soon.

“I do this because I love comics. If I wanted to make money, I would pick something else to do,” she said. “I can’t get enough of comics. I read them, I write them, I sell them.”

On May 6, Aw Yeah Comics will have a free comic book day. There will also be book signings by creators Chip Zdarsky, Thom Zahler and Kyle Starks. Look out for the 1966 "Batmobile" that will be present too.

by Nathan Gidley / NewsLink / 19 minutes ago