Not all Hoosiers are happy with the new president-elect.

To make their voices heard, protesters, including Ball State students, gathered at the Indiana Statehouse Nov. 12 to denounce Donald Trump. Some were chanting, "Not our president," while others went back and forth with counter protestors.

“I’m here today because I wanted to support the minority voice, really. I’m not here to democracy. I’m not trying to get Trump out of office," said Carli Hendershot, a sociology graduate student. "I’m here because I want to support others that are really being acted upon right now. I want to be able to be a voice and be an ally to those people."

Shelby Leveritt, a junior social work and women and gender studies major, said she thought a Trump presidency could endanger some populations.

One of the protest organizers, Audrey Bee, said she opposes Trump because of his previous statements about minority groups.

“People came because they both afraid and angry. The president-elect has said, done or promised to do vile things against disenfranchised segments of the population,” Bee said. “Trump will either step down as the president-elect or his policies will end up being different than what was previously planned. The people's collective power will give him no other option.” 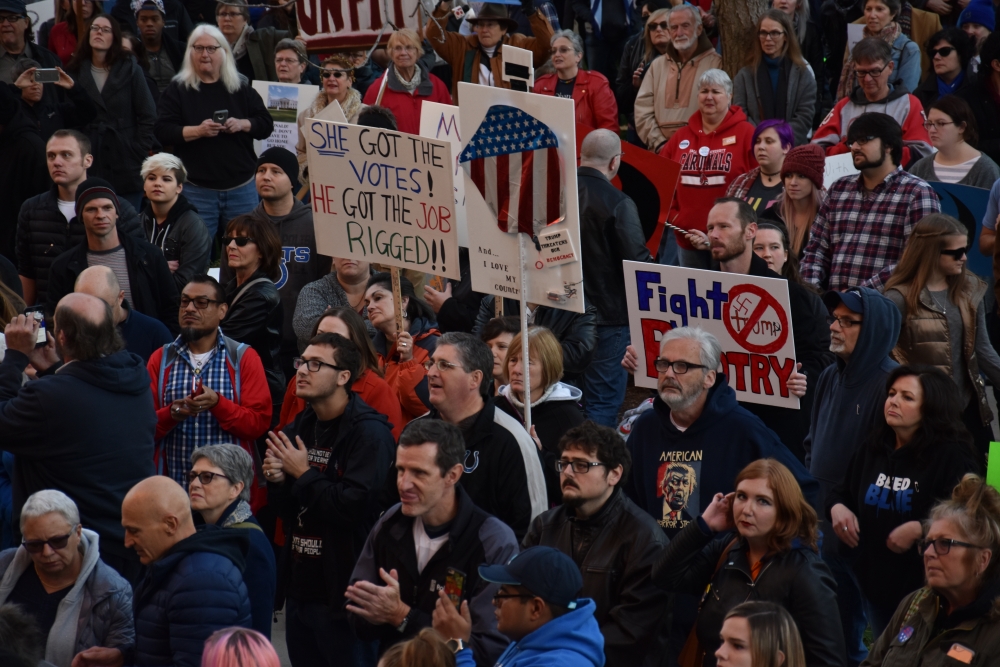 Morgan Aprill, a second-year master's student in TESOL Media Communications, said she felt that anger too.

“A lot of young people still did vote for Clinton because they were like, ‘well, we can’t have Trump because that’s going to be awful, because of the hatred that he’s been spewing,’” Aprill said. “I know for myself and a lot of my friends, we have been going through shock and despair and now it’s progressing into anger for pretty much being spat on by the establishment.”

However, Brien James, an Indiana resident and Trump supporter at the rally, said he wanted to observe the events in the state's capital to see how the evening would unfold.

“We just came out to observe and to watch and I’m concerned that some of these protests that have taken place this week — innocent people are being attacked, I’ve seen it on the news,” James said. "If that were to happen, I want to be here to try to protect my fellow citizens and if not I just want to watch."

Even though James had different views from those protesting, he respected their right to free speech.

“People have every right to protest. I encourage their right to peacefully protest as long as things aren’t being torn up and people aren’t being hurt, then go for it,” James said.

After the rally ended, a group split off and headed to Monument Circle. From there, the group split again, with one section heading north and the other heading south.

Police say the group that went north “splintered off” and began walking in the road, blocking traffic.

Tasers and pepper balls were deployed after the group of protesters attempted to pass a barrier that had been set up by the Indianapolis Metropolitan Police Department (IMPD).

Two police officers received minor injuries but were not expected to go to the hospital, according to a statement from IMPD.

As a result of the rally, seven people were arrested, four of whom were from Indianapolis.

It may be fall now but it doesn't feel like it just quite yet. Weather forecaster Adam Feick has the latest on when we may see temperatures start to feel like fall.

By Logan Salzbrenner / 10 hours ago

Like many universities that have had to make changes because of COVID-19, Ball State has also been affected. One building that has been repurposed is the Charles W. Brown Planetarium.