There was an atmosphere of disbelief and disappointment among students as they gathered on the University Green to speak out against the recently announced president-elect, Donald Trump.

Levi Todd, a junior English major and organizer of the event, said he felt it was necessary to demonstrate that the future president did not have support from many students and community members.

“I was baffled by the results of last night’s election,” Todd said. “Part of my processing of the results is doing something against it and demonstrating that I’m not in support of it. Today, there’s not a whole lot of action, it's just the community coming together to demonstrate that we don’t support Trump’s leadership in America and we will not. The best we can do is be there for each other and make sure everyone knows that no one is alone in that opposition.”

PHOTOS: See a gallery of images from the protest here.

Around 150 students showed their dissatisfaction by carrying cardboard signs of protest, some of which read "Love Trumps Hate" and other slogans. Some demonstrators wore symbols of LGBTQ pride, while others wore Clinton merchandise or Black Lives Matter shirts.

Leaders of the protest reiterated that the event would be a peaceful demonstration. At one point, students gathered in a circle and listened as speakers emerged from the crowd to have their voice heard.

“I’ve been watching my friends, my queer friends, online on social media, passing around suicide hotlines,” one demonstrator said in the circle. “Queer youth should not be considering suicide because of who our president is.” 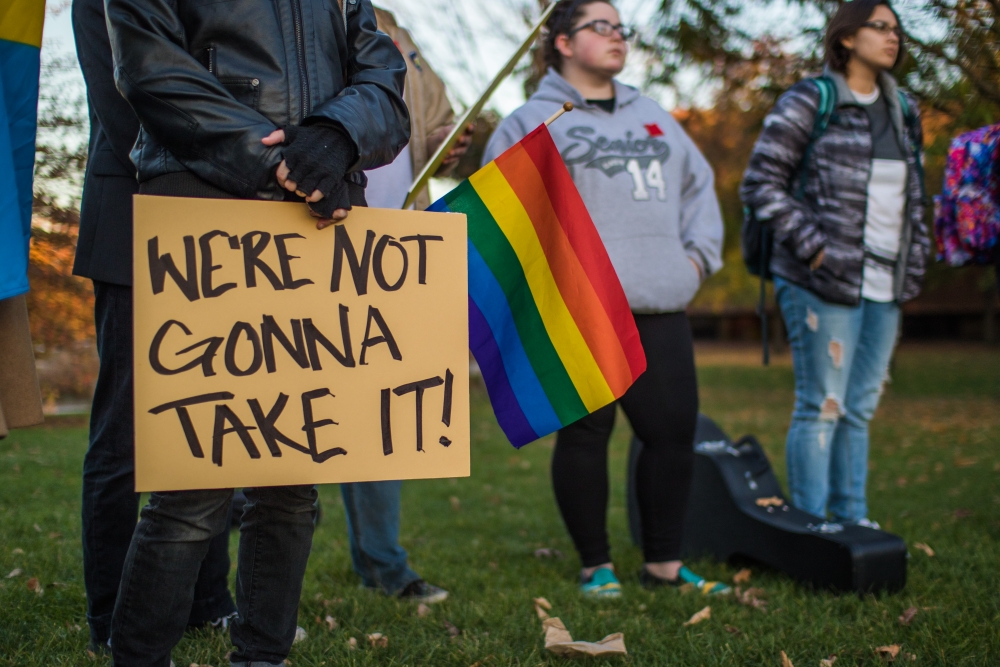 Students and members of the community joined together on the University Green on Nov. 9 for a peaceful protest after the election of Donald Trump. Reagan Allen // DN

Zoe O’Haillin, an Ball State alumna who returned to participate in the demonstration, also spoke at length about her fears for herself and other young members of the transgender community, and the potential consequences for them under a Trump presidency.

“It’s terrifying, it absolutely is. I see people denouncing their own heritage. Muslim women are afraid to wear their hijabs,” O’Haillin said. “People are afraid to be themselves right now, and that can’t stand in this country.”

Representatives from Feminists for Action and Spectrum were also vocal about their fears for their communities and for the future.

Some students walking past the demonstration shouted their support for Trump, and there were a few instances of yelling across the University Green. However, there was no serious conflict that occurred.

“There were no issues,” said University Police Department assistant chief Allen Williams. “But we’ve got several officers working tonight, and we’ve got some extra officers just for this event. We appreciate when they’ve given us some notice ahead of time so we can make sure everyone’s safe.”

The demonstration ended with information about where students could find support from their communities. Students reiterated that they felt this event was necessary in bringing people together.

“I think the most important thing was kind of a point that we were stressing here tonight, that we have to be unified in this,” said Ethan Gibson, a senior chemistry major. “If we’re divided in this, then we’re not going to be able to make progress. So despite our differences and our different ways of thinking, we all need to be in this together.”

By Meghan Sawitzke / 1 hours ago

By Blythe Miller / 7 hours ago