Ball State (4-3) hosts Akron (4-3) for its annual Homecoming game on Saturday at 3 p.m. It's the first meeting between the school in two years.

The Cardinals hold a slim 11-10-1 lead in the all-time series against the Zips.

In Ball State's last game, the Cardinals fell behind in the first half before scoring 24 unanswered points on their way to a 31-21 win at Buffalo. Akron suffered its first Mid-American Conference loss of the season last week, a 41-0 defeat at the hands of No. 20 Western Michigan.

Jake Fox, the Daily News football reporter, is covering the game and offered up some insight on the key positional matchups:

Running back James Gilbert has been one of the hottest running backs in the country over the last few weeks.

After three straight games with 100+ yards and multiple scores — including last week's 270-yard, two-touchdown performance — Gilbert ranks fourth in the country in rushing yards with 854.

Akron was gashed on the ground last week by Western Michigan's Jarvion Franklin, who had 281 yards and a touchdown on 33 carries. The Zips are giving up an average of 203.4 rushing yards per game this season.

With Darian Green expected to be back in the lineup, Ball State gets a boost. Gilbert and Co. could be headed for another big rushing day.

Senior David Moore had a nice game in his absence with four pass breakups. If Miller misses this one, he will be looked at again to play opposite of sophomore Marc Walton.

The Zips have two receivers — Jojo Natson and Jerome Lane — that rank in the top 10 in the conference in receptions and yards. With more yards than any other duo in the MAC, they have also combined for 10 touchdowns in Akron's big-play passing offense this year.

Ball State's pass coverage has improved the past few weeks, but it will be tough to contain this set of receivers.

This is an interesting matchup to watch, given Neal's struggles over the last few games.

He threw two picks last week at Buffalo, including a forced throw at the end of the half that killed a good drive. Neal has thrown for 1,513 yards, six touchdowns and eight interceptions on the season, to go along with 238 rushing yards and five scores.

Akron ranks second-to-last in the conference in passing yards per contest, giving up an average of 280.4 per game. The Zips do have five interceptions, including one returned for a touchdown.

Neu said it's only a matter of time Neal breaks out based on his preparation. If he makes cleans up the decision-making and mixes in his ability to run, this could be the game.

In a game Ball State comes in favored by 3.5 points, scoring in the red zone could ultimately decide the game.

All three of the Cardinals' MAC games have been decided by 10 points or less, including a one-possession loss to Northern Illinois and Central Michigan.

Ball State ranks 10th in the league in red zone defense, giving up 12 scores (12 touchdowns on 17 chances. Akron, on the other hand, is one of the best on offense inside the 20-yard line. The Zips have converted on 90 percent of their chances, and have only settled for four field goals this season.

It looks like Akron will have starting quarterback Thomas Woodson back in the lineup this week after missing a few games. If the line holds up, Woodson could give his team an even better chance to cash in on red zone opportunities. 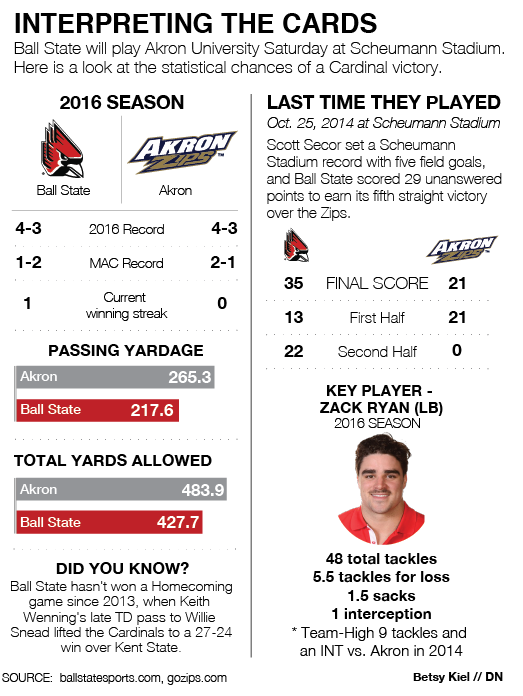