The Atrium — Salmon, steamed broccoli, and rice at the grill

LaFollette — Monthly homestyle specials at Out of Bounds; top-your-own donut bar at The Buff 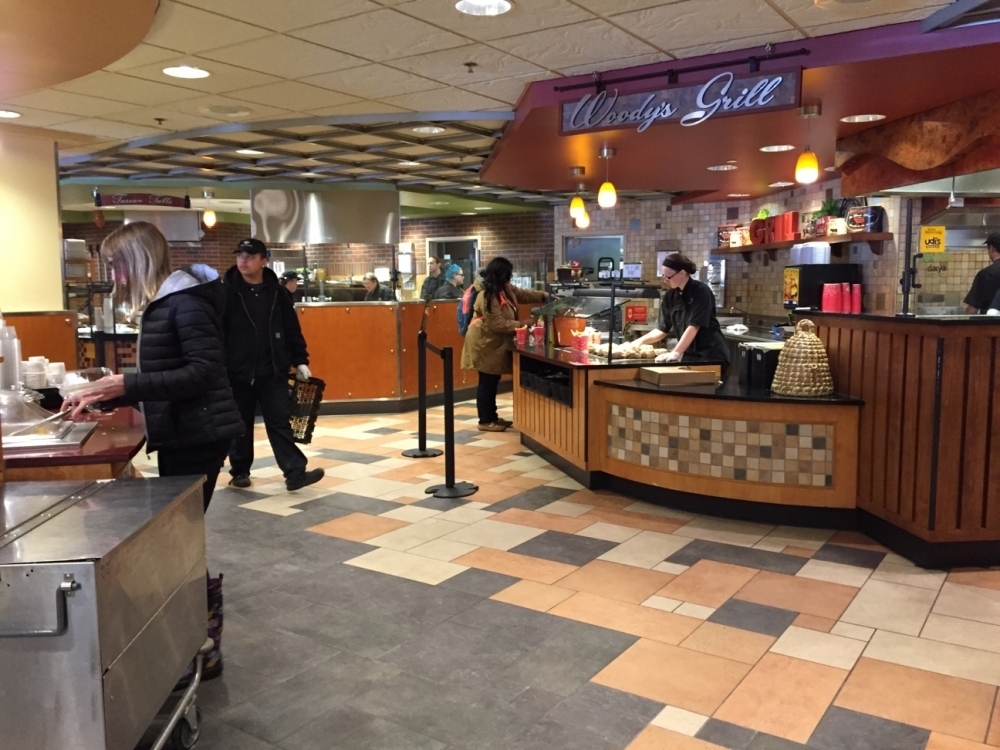 Big changes in Ball State Dining Services were unveiled with the start of the fall semester, and the additions can be seen throughout the 14 on-campus dining locations.

The biggest construction projects in The Atrium and Eilliot Dining are officially complete and employees are excited for the new changes, Dining Services Assistant Director of Personnel Training and Administration Erica Jefferis said. The changes, which include a full remodel of Elliot Dining and a partial redesign of Chick-Fil-A, came as a result of necessary updates and improvements to the waiting and eating areas.

"The Chick-Fil-A refresh has allowed for a better flow of business for both customers and employees, and Elliot Dining was ready for a full remodel," Jefferis said.

Allison Marigold, a sophomore sociology major, said the new look of both dining areas caught her eye once she returned to campus, and it's already encouraged her to eat more at the two locations.

"I used to never go all the way to Elliot to eat, but it's so nice now," Marigold said. "I also have a lot of classes in the Letterman building, so I've been going to Chick-Fil-A a lot more, and the line is going so much faster. It's great."

A new variety of payment options, food choices and discounts are also all in effect now that dining is back in full swing.

Students with dining plans now have meal equivalencies of $8.40 for lunch and dinner, an increase of 20 cents from previous school years. For those without dining plans, Apple Pay and Android Pay are now accepted at all dining locations, allowing customers to pay from their smartphone. The new form of payment not only saves time, but also is more secure, Jefferis said. So far, everything with the new payment system has been going well, and Jefferis said she anticipates a lot of new users as the school year moves forward.

“We received no official complaints or requests for Apple Pay or Android Pay so far," Jefferis said. "This is a feature that is standard with the hands-free devices and it's going well."

Other discounts include 80-cent fountain drinks and coffee when students use 16-ounce BSU Dining reusable mugs or tumblers, which are available for purchase at most cashier stations around campus. When paying for food, those purchasing Dining Cash funds while on a meal plan now also receive 10 percent off every $100 block purchased. Dining Cash, an optional debit account of funds used in the same way as Dining Plus, doesn’t expire until students leave the university and is also available for those living off-campus without a dining plan.

To make it easier to grab healthy meals, Dining Services are also lowering the price on most whole fresh fruits this year and have kept prices constant on custom items like salads, sandwiches, wraps and pastas. Dining employees are also labeling items that contain gluten, and are either vegetarian or vegan. Calorie counts are also available online through NetNutrition.

Anthony Smith, a freshman undecided major, said he prefers to eat foods without gluten, and the new dining policy has been "a major relief" for him so far.

"I know I could have asked what foods didn't have gluten in them, but when you can just look and see what has gluten and what doesn't, it's so much easier," Smith said. "I'm really happy the dining services here are able to do this, it makes eating in the dining halls a more enjoyable, easier thing."

With many students excited about the new changes, there is also some disappointment, particularly with the departure of Starbucks from Woodworth Commons.

"It's annoying because it used to be right in the middle of campus and I could get the coffee I like," junior computer science major Ashley Browning said. "I love Starbucks so much, so it's sad."

Disappointment may be the reaction from some, but Jefferis said the decision to switch to a different coffee company had deeper purpose.

"The transition to Hubbard and Cravens was made because we support buying local," Jefferis said. "There's still a Starbucks in the Student Center, but we're excited for the new addition in Woodworth."

The Indianapolis-based coffee and tea company is the newest addition to dining's options, and the addition marks the completion of dining service's construction for the school year.

By Staff Reports and Amber Pietz / 2 hours ago

As announced by Ball State University Associate Professor of Chemistry Sundeep Rayat, Ball State is encouraging students to apply for a Teacher-Scholar Program. This program is aimed mostly towards transfer students and first and second year students.

SMEDLEY: With Triple H as new Head of Creative, WWE has the chance to be better than ever

SMEDLEY: After three weeks as WWE Head of Creative and Executive Vice President of Talent Relations, Triple H has already made significant improvements to WWE programming. Now, he has the chance to make WWE better than ever.