UnKoch My Campus group to address concerns at forum Monday 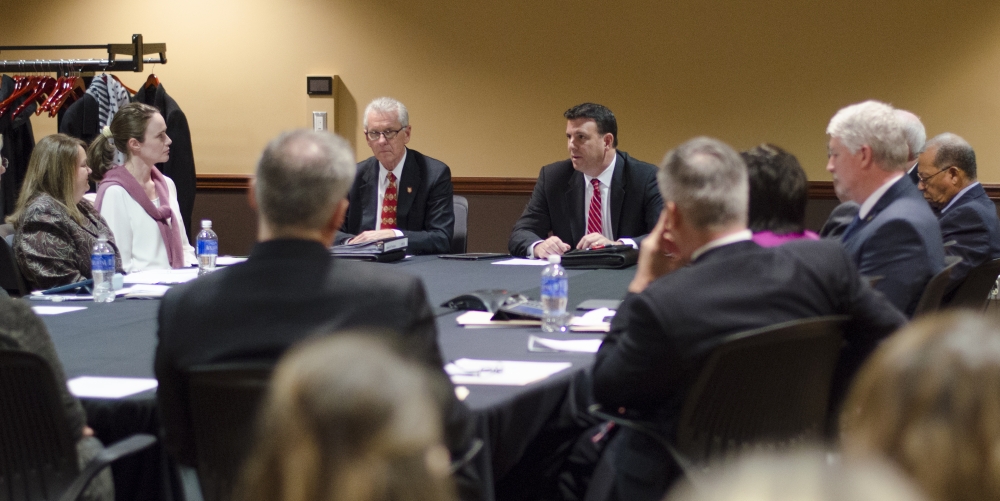 A group called UnKoch My Campus will speak at the Board of Trustees' open forum May 23. The group plans to address concerns regarding the Koch brothers' donation to Ball State and its potential affects on the selection of the university's next president. DN FILE PHOTO BREANNA DAUGHERTY

At the Board of Trustees' open forum on May 23, a group named UnKoch My Campus plans on presenting arguments and research regarding why the Charles Koch Foundation's donation to Ball State could skew the election of the next president — and why everyone should care.

The anti-Koch group is working all over the nation, traveling to schools that have received monetary donations from the brothers. Ralph Wilson, a senior researcher with UnKoch, said Ball State is important to his cause because its presidential search could affect universities nationwide.

"UnKoch My Campus is a network of students, faculty [and] alumni that essentially are looking to expose donor influence and find ways to correct that influence," Wilson said. "That is, private donors being able to use their money that they're giving to a university for political and private profit gain."

Their research suggests ties between the billionaire, right-wing Koch brothers and Ball State might be deeper than they appear. Wilson said the contacts between them show relationships between Koch's donation and the removal of academic freedom in the hands of the university.

Wilson said after reviewing the contracts and agreements, he found that while the Grant Agreement appears to leave hiring of professors to the university, "the donor retains explicit control over the use of funds, including the annual renewal of their funding to any part of the Institute Programs," meaning the agreement gives Koch and alumnus donor John Schnatter the “sole and absolute discretion” to withdraw their funding for any part of the Institute Programs at any time.

"The university is not similarly allowed to terminate the agreement, except for when the donor has already withdrawn funding," his research says.

With the trustees still allowing the public to give some input on the presidential candidates, Wilson said the community should take advantage while they can.

The trustees said they planned an additional seventh forum meeting for the purpose of getting more input from students after almost none came to the first six. Graduate student Morgan Aprill said she's had a hard time getting students involved.

Aprill, a few fellow students and a faculty member have been working alongside UnKoch My Campus to gain attention and eventually expose what they say is corruption. At the meeting, she hopes to see a larger crowd than previous forums.

"I invited everyone I could think of," Aprill said. "I talk to people and I'm like, 'Do you understand what this is? Why it's important, why you should come?' We should be showing more interest in our next president."

She said she first became involved and interested in the presidential search soon after former president Paul W. Ferguson left office without reason earlier this year. Hearing about the Koch brothers' donation only spiked her interest more.

"I mean, when you look at it and you see the events, it's questionable," Aprill said. "Our campus's commitment to alternative energy resource, the Koch brothers are big in oil and coal. … Why are they interested in our university? It's sort of a question that some of us have."

Wilson said his alma mater, Florida State University, was previously in a very similar situation to what Ball State is facing now.

After Florida State's former university president Eric J. Barron left office to become the president of Pennsylvania State University, the Charles Koch Foundation also gave a donation to the school, and the presidential search committee selected to find its next president was filled with Koch-affiliated trustees.

Wilson said the new president, John Thrasher, was also affiliated with Koch. He fears this will be the future state of Ball State.

While Aprill is still pushing for the trustees to declare Ball State's search as open so the candidates' names may be made public, trustee Rick Hall previously said that would not be happening. But Wilson said an open search did not help Florida State. Despite wide disapproval from students, faculty and staff, he said Thrasher was still elected.

Wilson said Ball State's search, if it goes as Florida State's did, would set a precedent.

"Essentially, Koch would be able to take over a university from the top down as well as from the bottom up," he said. "That was what we were seeing, now we're seeing it all over the country."

At the search forum, Wilson plans to address the trustees, search committee members, the Muncie community and Ball State students with his research. He said the first step in protecting the university from "corruption" is getting the word out.

"I'd love to get around to the details of the contract, running through it, pointing out the particular points of the contract that are problems, making that really clear," Wilson said. "That's my obsession, what I do. ... I'll be prepared to describe the problem on the national scale. That's what motivates [UnKoch My Campus] — it's not just a fluke or two, this is a massive operation."

On May 24, the day after the forum, Wilson will speak at 4:30 p.m. in Robert Bell Building Room 126. He said he's not completely sure what will happen there, but the outcome will depend on what happens when he speaks at the forum.