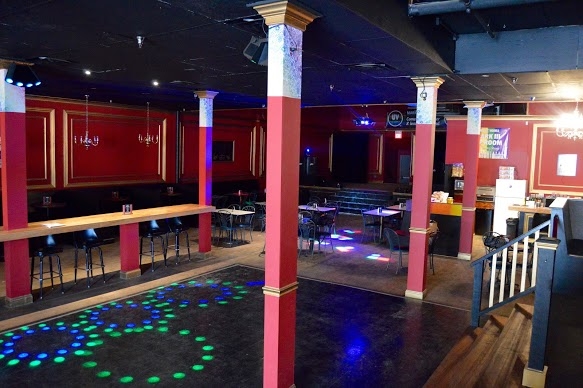 While it has been a place for customers to relax, enjoy themselves and "come in a stranger, and leave as a friend," as its slogan suggests, it has also been an iconic place for the City of Muncie and has had a special place in certain customers' hearts.

For one customer, Melanie Jones, The Mark III Taproom became a safe haven where she could go after getting out of an abusive relationship in 2015.

Her support system was nearly gone, along with most of her possessions, and she was seeking to reestablish a community for herself.

Her first experience with the bar was when she first visited it in April 2015 for a karaoke night. She said she was welcomed in and she laughed and smiled for the first time in a long time.

“I didn’t even really know how to order a drink. I mean, I was really bar-stupid. It was just a welcoming atmosphere and it was fun — [that] was the big thing that kinda made me go back,” Jones said. “I went home that night and emailed a friend and was kind of like, ‘Hey, I went and tried out the bar like I said I was going to and this is what happened, and you know what? I think I’m gonna be okay.' This bar’s really had a big impact on me and on my well-being, beyond just being a fun place to go. It’s an important place. It’s home.”

Fellow patrons of the bar have held her as she cried and offered to help her change the locks on her house after her former partner threatened to come to her house with the keys to get in.

“In a lot of ways, that bar saved me. … When I was calling hotlines just trying to make it through the night [it was] a place that I could go and see a smiling face who was happy to see me,” Jones said. “I really want people to understand that the misconceptions that they have about gay bars are just that: ... they’re misconceptions, and until you’ve been inside, until you’ve gotten to know the people in the community, you have no idea how meaningful a place like this can be for LGBTQ people.”

“When they announced that they were gonna be reopening, I honestly didn’t even care to begin with where they reopened," she said. "They could have reopened in a barn and I would have been thrilled, but the fact that they are in such a good location, that they are in such a great building that offers so much more than what the previous building did in a lot of ways … is really phenomenal. It’s really a blessing.”

Mark III Taproom co-owner Natasha Martz said there have been a lot of ups-and-downs since they closed, but she and the other two co-owners know the Mark is a place the community needs. The old venue was only 2,000 square feet, and the new venue is 6,500 square feet.

When it first closed, state representative Sue Errington and several downtown businesses reached out to see if they could help.

“All through this journey, we’ve had overwhelming support. … We are just so blessed when it comes to our patrons. With it being a smaller community, it’s not just patrons. A lot of them are more friends or even like family. They’ve been in here helping us clean and organize," Martz said.

Thanks to help from businesses and customers, Martz and her fellow co-owners were able to expand the cocktail menu options and add a foosball and pool table for entertainment in the new bar.

Martz also made improvements to the lighting and sound system, and the stage for performances is larger. Live music and burlesque shows are now possibilities, and the Mark is working with Ball State’s theater department and Muncie Civic Theatre to put on productions.

“It’s an amazing opportunity for all of us to have another place to showcase some of the talented people that reside in our community,” Martz said. “We have some art shows coming up, so it’s just a whole new ballgame."

Martz hopes to provide excellent customer service and for the Mark to be a safe place, while still having fundraising events and being involved within the community.

“We have a large straight patronage too, but this is still home to the LGBT community and they know it. This is our place and always will be … a place for those unsure 21 year olds [and] Ball State students," Martz said. "They have a place to go where they know they’re welcome and they’re safe and that we do care. That’s very important to us."

Jones said she is sure opening night will be celebratory, and she is excited to see everyone in their new home at 306 S. Walnut Street.

While the building was closed, people who frequently visited the bar met monthly. Jones said the Mark is a place she can go by herself without having to feel like she has to schedule plans to go with someone else.

“I feel like I can just walk in and it’s home. If I’m the only one sitting in the bar sitting at a barstool and I’m the only patron there at all, it’s still home,” she said.

For Michael Boxell of Winchester, Indiana, the Mark has been a place where he has felt comfortable being surrounded by people, even when he wasn’t comfortable with himself.

“It’s important that people have a place to go. … Everybody should feel welcome and want to come in and go there, no matter who you are, ... especially people who are LGBT in this community," Boxell said. “That to me is what that bar became. It was a place for me to grow in myself, feel comfortable about myself, and it was also a place for me to interact with others who are like me and to help others."

Boxell was one of the volunteers who came in to help Martz and the other two co-owners get the new building ready for business. It inspired and amazed him that so many people came to help, showing him this place matters to the community.

“If it didn’t matter, if it still wasn’t something that people cared about, nobody would have stepped forward. People would have just let it die. That’s just the truth of the world — we don’t fight for things that we don’t care about," he said. "It just shows me that people still care and it is a very inspiring message, and I think more people should learn about it and more people should know about this place, this place that has been not just part of the gay community, but part of Muncie."

It may be fall now but it doesn't feel like it just quite yet. Weather forecaster Adam Feick has the latest on when we may see temperatures start to feel like fall.

By Logan Salzbrenner / 10 hours ago

Like many universities that have had to make changes because of COVID-19, Ball State has also been affected. One building that has been repurposed is the Charles W. Brown Planetarium.