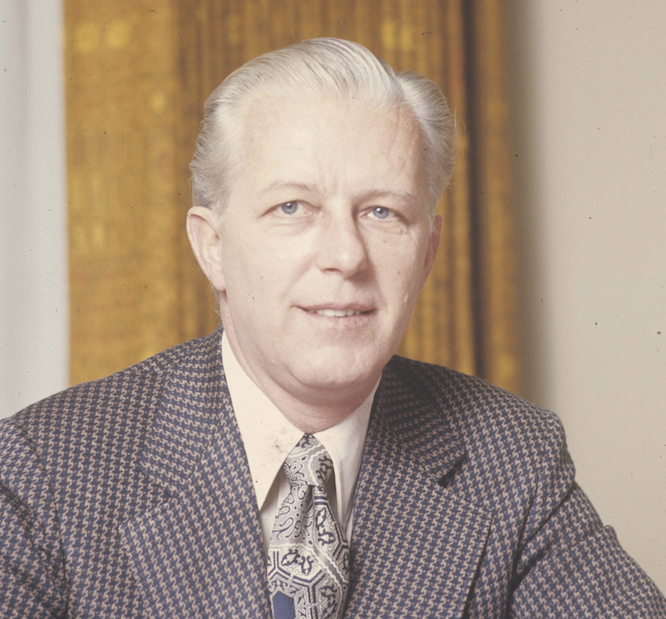 John J. Pruis, former president of Ball State, is remembered for his dedication to education and the community.

Pruis, who served as president of the university from 1968-78, died Jan. 15 at the age of 92. He and his wife Angeline celebrated their 71st wedding anniversary last September.

David Pruis, his oldest son, said he will always remember how much his father cared and loved his family and Ball State.

“Education was important to him, and he just wanted that experience to be the best it could possibly be for the students at Ball State,” David said.

He said his father loved seeing students’ achievements and performances, whether it was in sports, onstage or in the arts.

“He had some great stories and some great relationships,” David said. “There are many good friends that are still at the university and the Muncie community.”

One of those relationships John had was with David Bahlmann, president emeritus of the Ball State University Foundation, of which John was a member.

Bahlmann said John acted as a mentor to him when he became president of the foundation back in 1990.

“He was a very scholarly individual, but he was a very engaging and accomplished person to be around,” Bahlmann said. “He was very willing to listen, talk and share new ideas and go through new ideas with people.”

Jonathan Lewis, director of dining at Ball State, is remembered by family and friends for his friendly personality and dedication to Ball State and the surrounding community.

He began working at Ball State in January 2006, just seven months after Leisa Julian, the associate vice president for business and auxiliary services.

Julian was a close colleague to Lewis and said he was “soft-spoken with a lighthearted wit.” She said his work ethic was also positively influenced by his outgoing and friendly personality.

Above all else, Julian said she would miss Lewis and the advancements he brought to the university.

“He was an experienced and dedicated colleague who worked ardently to make [Ball State]’s dining operation the award-winning, contemporary, customer-centric operation that it is today,” Julian said. “I will miss Jon.”