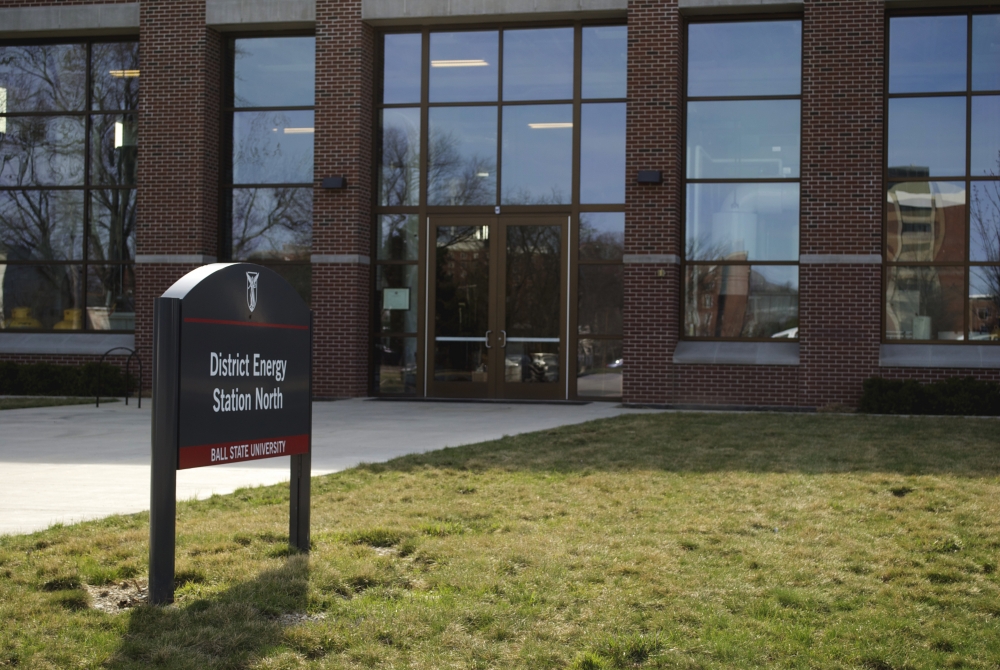 When alumna Kourtney Dillavou was a student, she decided she wanted to pull Ball State out of the fossil fuel business.

A Fossil Free campaign usually asks an institution to do two things: immediately freeze new investments in fossil fuel companies and slowly divest from or sell investments in coal, oil and natural gas.

After assembling a team of like-minded students and faculty, Dillavou wrote a letter to the Ball State Foundation, the organization in charge of the university’s investments, and asked for a meeting with foundation representatives to discuss the university’s investments in fossil fuels. She was granted a meeting, and Ball State Foundation representatives listened to her and others who have kept the conversation going since she graduated.

In January, a little less than two years after Dillavou graduated from Ball State in May 2014, the foundation finished creating an alternative investment portfolio managed under socially responsible principles for Ball State donors to contribute to. The companies included in the investment portfolio have had their environmental stewardship, relationship with associates and governance evaluated.

The foundation hasn’t promoted this socially responsible option to donors yet. It still has a few tasks to accomplish in connection with the new portfolio, said Thomas Heck, chief investment officer with the foundation. But Dillavou is hopeful.

“It’s a step in the right direction, and hopefully Ball State will continue going in that direction,” Dillavou said.

Dillavou saw a problem in Ball State’s policy, took action and changed it. And she didn’t wait for Earth Day, which is April 22.

Current students can do the same at Ball State in three different ways: by joining a student organization, by going through the Student Government Association or by approaching an official university group or administrator directly – sort of how Dillavou did.

Environmental activism has a long history with students at higher education institutions and in the United States in general. The conservation movement, a push to protect America’s natural resources, started with the help of President Teddy Roosevelt in the early 1900s. During his two terms as president from 1901-1909, he established five new national parks.

In the 65 years between Teddy Roosevelt’s environmental efforts and the first Earth Day, activists beautified cities, brought attention to pollution and laid the groundwork for the environmental movement.

Then, on the first Earth Day in April 1970, in the midst of pollution-fueled river fires and oil well blowouts, thousands of college and university students organized protests about the state of the environment, according to the Earth Day Network’s website.

Another important time period was 1986 to 1990. The number of college freshmen who said they wanted to get involved with a program to clean up the environment doubled, according to “Generation at the Crossroad” by Paul Loeb.

Around 1995, a collaborative approach toward campus sustainability initiatives began to develop between students and faculty with both parties working within the university system to make change. This is still a common approach today, according to a 2010 doctoral dissertation by Christina Erickson, who is the director of sustainability and campus planning at Champlain College in Burlington, Vermont.

Dillavou’s attempt to get Ball State to abandon its investments in oil, natural gas and coal uses the strategy Erickson describes.

Today, the Association for the Advancement of Sustainability in Higher Education lists 19 student-focused campus sustainability organizations students can get involved in either nationally or regionally in the United States.

The list is community submitted and not comprehensive, however, said Andrea Huggins, the marketing and communications coordinator for AASHE.

AASHE has numerous resources for administrators, faculty and students interested in sustainability.

Because Ball State is a member of AASHE, employees and students can access member information by creating an account with their Ball State email address.

Ball State has had small environmental activist groups on campus for decades, said Kevin Kenyon, the former associate vice president for facilities, planning and management at Ball State. However, it wasn’t until Ball State’s Council on the Environment was formed in 2001 that student sustainability efforts started to gain traction, he said.

COTE, which includes representatives from each of the university’s academic colleges and vice presidential areas, as well as the student body and Muncie community, gave students an audience and extra support, Kenyon said.

It’s important for students to get involved in changing university policy because they have a certain power, Kenyon said.

“Believe it or not, the administration listens to students a whole lot more than they listen to [other] administrators and faculty,” Kenyon said.

After all, it’s the students who are paying to attend Ball State.

“They have fresh ideas and aren’t necessarily tied to the way things once were,” she said.

Students can benefit from taking action in different ways as well, Spalding said. It makes what they learn in class “more real” if they’re in a sustainability-related major, and it can prep them for enacting change in their future communities and jobs.

Students can change sustainability-related policies at Ball State in many ways, Kenyon said.

First, there are efforts from Ball State student sustainability organizations.

According to Ball State’s “2015 Sustainability Guide,” there are 10 student organizations engaged in sustainability. One of them, Emerging Green Builders, is affiliated with the U.S. Green Building Council, which is listed on AASHE’s website.

B.E.A.T. originally comprised four paid Ball State students who educated faculty and students on sustainable behaviors to help them change those behaviors. They also focused their efforts on the Ball State Energy Challenge, an annual competition between residence halls to reduce their energy consumption.

In the past three years, B.E.A.T. has opened itself up to volunteer members and added other sustainability-related endeavors that involve university policy to its list of activities, said Mikaela Pieri, B.E.A.T.’s president and a junior psychology major.

The organization is looking into reducing the number of plastic bags used in on-campus dining halls.

First, B.E.A.T. has to gather data to see if students would be interested in using fewer plastic bags. Representatives from B.E.A.T. have already met with dining officials who agree with their idea.

He also said that there are other things students could do to get their sustainability projects noticed by Ball State.

Student Government Association is one possible avenue for change.

SGA student senators can propose bills asking for campus improvements. Other senators and SGA’s executive slate can approve those bills and send them to university governance where every department at Ball State is represented by a university employee who can accept or deny the bill.

It’s a tough process, said Jake Peterson, an SGA senator who has had two of his pet bills struck down as they made their way through the system. One of them was an attempt to introduce more fruit and vegetable options in Ball State dining locations.

It’s hard for students to know the ins and outs of the university enough to be assured a bill is feasible, he said.

“[SGA] just gives suggestions on how to represent our students,” Peterson said. “We’re kind of a communication vessel.”

Finally, Kenyon suggests the Dillavou approach. Students and student groups can present their ideas directly to different areas of the university.

Another successful Ball State initiative started this way. Most of the main buildings on Ball State’s campus contain water bottle-refilling stations so students don’t resort to buying and drinking bottled water, a problem students spotted and subsequently brought to Ball State’s Council on the Environment.

As Dillavou, Pieri and Peterson can all attest, however, influencing campus change has its challenges.

Heather Spalding, the sustainability leadership and outreach coordinator at Portland State University, said the idealistic nature of some student’s sustainability solutions can clash with rigid university processes, but that’s when students should evaluate whether their proposals are relevant or feasible.

John Vann, the former adviser for the minor in sustainability at Ball State, a Ball State marketing professor and a member of COTE, said a big problem with student groups is their transient nature. He helped Go Fossil Free Ball State with its campaign.

It’s hard for student sustainability leaders to recruit and retain members. Dillavou only found 13 other students to join Go Fossil Free – five of whom she could describe as dedicated.

Vann has overseen groups that no longer exist at Ball State.

B.E.A.T., however, has been around since 2010. The fact that four of their members are paid might be one of the reasons why, Vann said.

She said university sustainability initiatives are often scattered throughout the university in the beginning – similar to how Ball State’s are now.

Eventually, universities such as Ball State come to the realization they need to hire a full-time faculty member whose job it is to think about sustainability initiatives, Woolston said. When employees have another job in addition to sustainability duties, they might choose to address their primary duties first.

At this time, Ball State does not have a coordinator like Woolston, or an office of sustainability as Indiana University, Purdue University, University of Notre Dame and a number of other universities nationwide have created.

Woolston is a full-time sustainability faculty member. She and the students she oversees – who are often paid, too – have developed successful sustainability initiatives at Tufts, including trayless dining and a bike-sharing program.

These programs are well established because of Woolston’s oversight.

One of her dedicated members, Dan Kaiser, has assumed her position. He, two other students and two faculty members, including Vann, are the only people left in the group, Kaiser said.

Kaiser isn’t sure what will happen to Go Fossil Free when he graduates. He isn’t actively recruiting any members. He thinks Vann will keep it going – students or not.

By Elijah Poe / 39 minutes ago

Blaine and Deja break down Project Tiger Moth, and why it is so beloved by fans of the original Thomas the Train series.

Deja and Blaine break down the new Pokemon games, Scarlet and Violet, and why some fans want a refund.