The past few years have treated the Department of Family and Consumer Sciences well, whether it’s been the announcement of McKinley Commons (now on hold), partnering with hotels in Downtown Muncie, renovations to facilities in the Applied Technology Building or large increases in online enrollment. 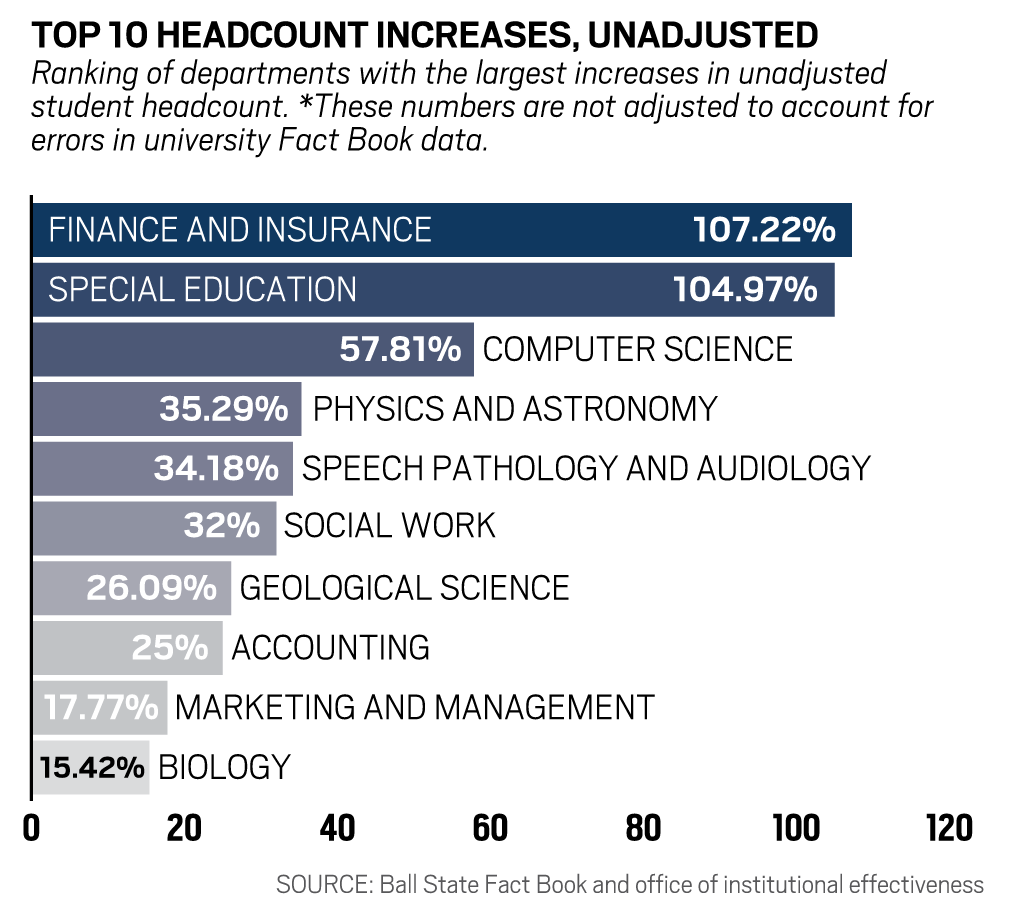 But that didn’t show when looking at Ball State’s College of Applied Science and Technology Fact Book. Department headcount — a measure of how many students are in a department — showed the department had a 42 percent decrease in enrollment between 2010-11 and 2014-15, going from 1,612 students to 937 students in just five years.

However, there were discrepancies.

“We never had 1,600 students. Otherwise, I would have known that by now,” said Sotiris Hji-Avgoustis, chair of family and consumer sciences.

That data placed FCS as the third-worst department on campus in terms of headcount, which is just one of many metrics used to decide how much funding and what resources departments get. FCS wouldn’t be in the position to benefit from those new projects if it had actually seen that 42 percent decrease in headcount, Hji-Avgoustis said.

As it turns out, the reported data was wrong.

A Daily News investigation into departmental headcount discovered problems in how some departments were represented in the Ball State College Fact Books — the place where the university publishes official data about itself. It revealed the two departments with the worst declining headcounts were wrong or misrepresented and 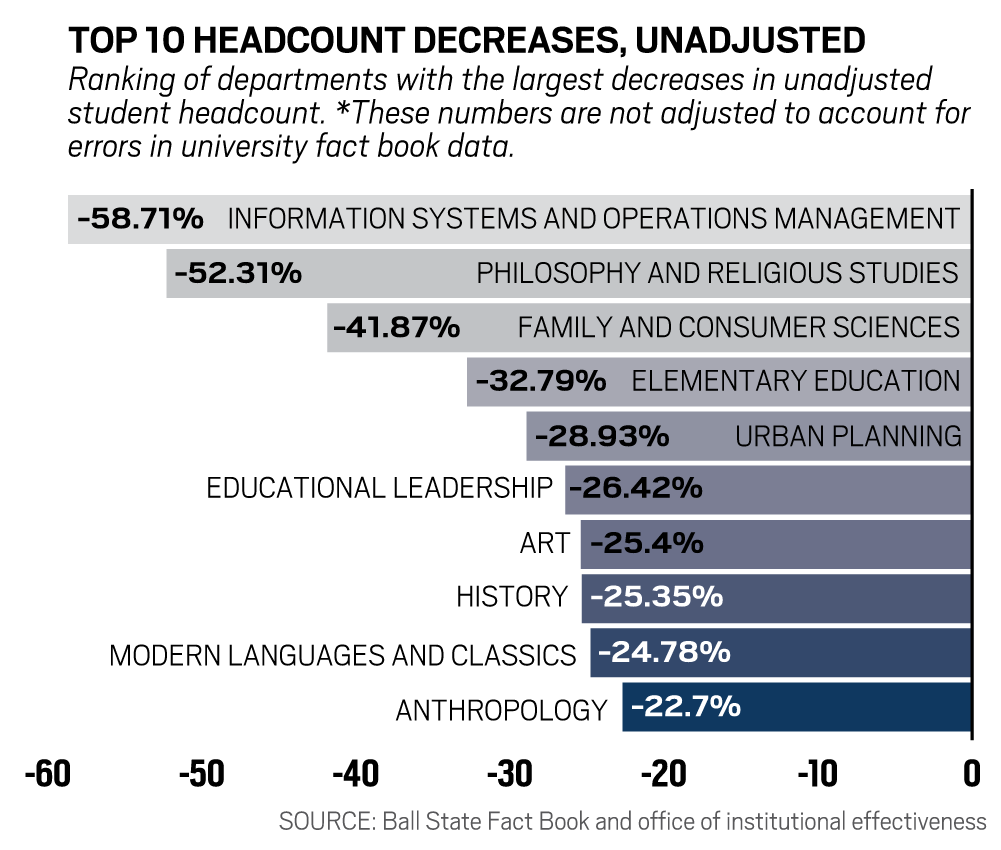 The other department impacted by incorrect data was information systems and operations management (ISOM). The data indicated it had the largest headcount decrease campus-wide between 2010-11 and 2011-12 at 59 percent.

ISOM’s actual headcount change for that time period was a 29 percent increase, which means it had the seventh-largest increase in headcount. FCS sits at No. 17.

Although Ball State’s office of institutional effectiveness promptly addressed the errors in ISOM and FCS’ data.

Bill Knight, assistant provost of institutional effectiveness, said his office will not conduct a review of reported 2010-11 and 2011-12 data due to understaffing and the time crunch that comes with the end of the year.

“We are [at] the limit of what else we can do in the next few weeks,” Knight said.

Headcount data is one of many important metrics the university tracks. It exists for several purposes, one being general information for the Ball State community, Knight said. 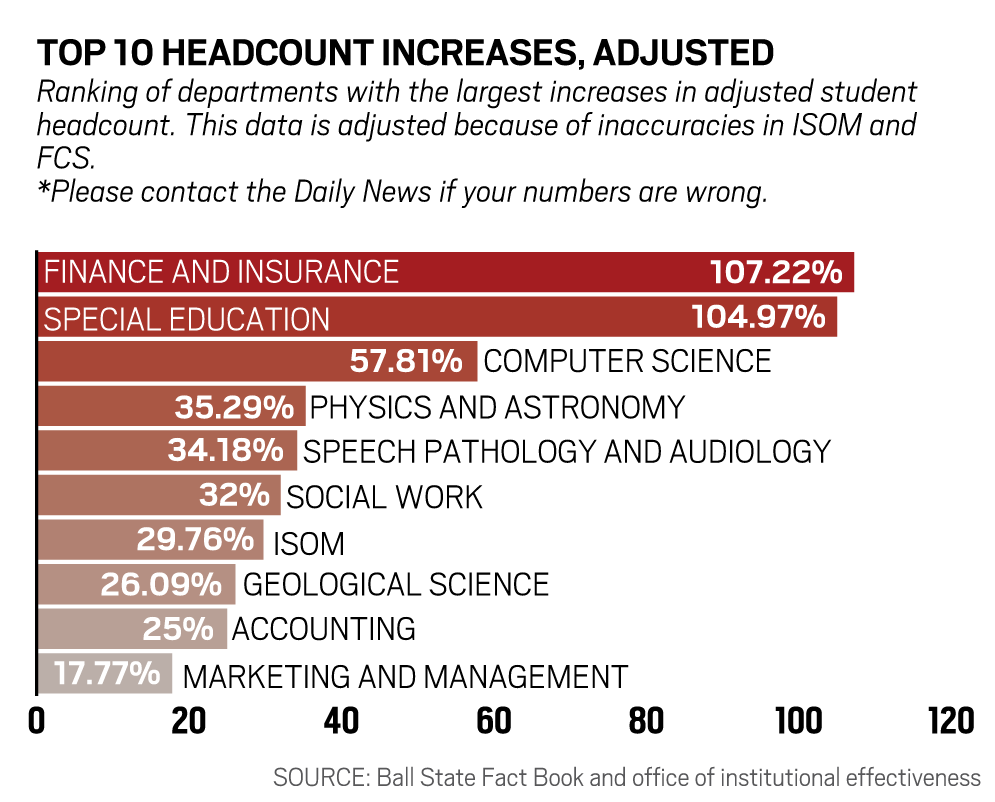 Headcounts help college deans and the provost assess how well a department performs, what money and resources they receive from Ball State and if a department can add new faculty.

More specifically, headcounts are used in departmental reviews by Ball State and for accreditation purposes. All Ball State academic departments must carry out a unit review every five years, Knight said.

This review helps determine how a department is performing. Some of its components include a self-study that considers a variety of factors like headcount, faculty credentials and research, reviews by people outside Ball State, and other things.

“Headcount is certainly an important measure of program viability, as is credit hour production, but ... these are just pieces of the puzzle,” Knight said.

What’s more, headcount and other numbers are reported to the Indiana Commission for Higher Education, the United States Department of Education and the Higher Learning Commission, the university’s accrediting agency.

These agencies make decisions ranging from if the university’s programs are accredited to how much money will be given to colleges. The information reported at this level can identify specific majors, but not departments, Knight said.

“Our reporting of information matters because we want the university to be planning and making decisions based upon evidence rather than conjecture or hearsay,” Knight said.

However, looking solely at Fact Book data doesn’t provide important context as to what’s going on at the local level for these departments. 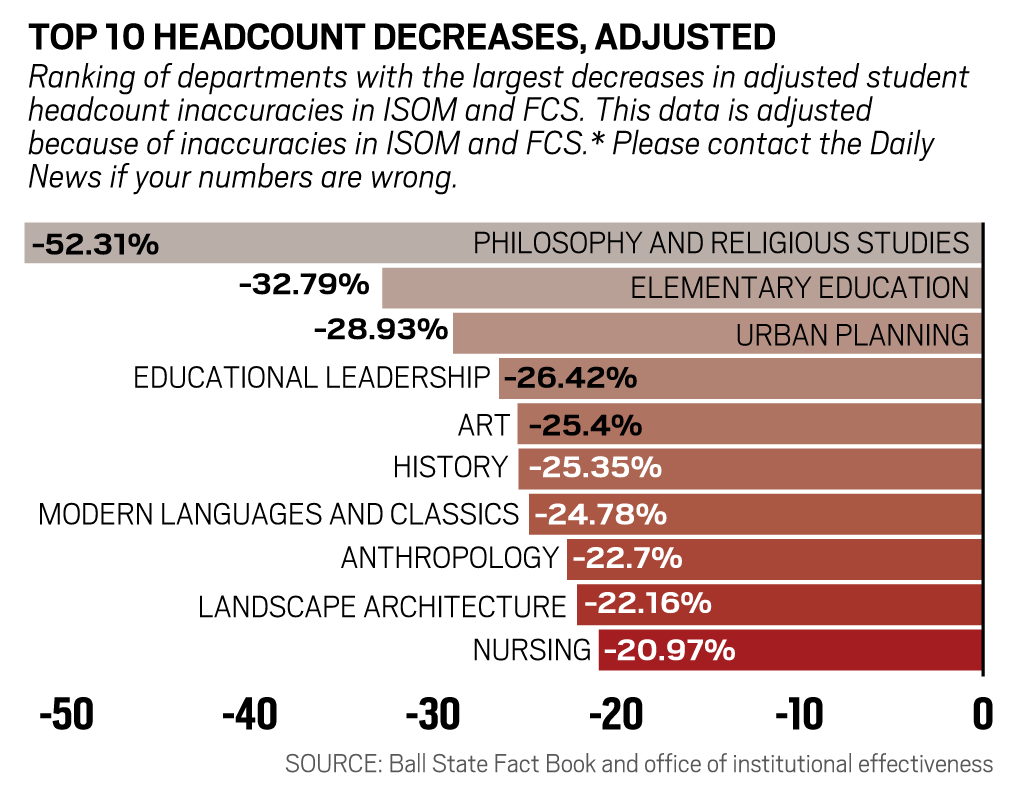 The Daily News reached out to about 10 departments across campus, seeking context and comment from departments that have seen the largest increases and decreases in total headcount.

The Daily News’ spoke to three other departments — special education, elementary education and computer science. They said they didn't have issues with the data reported by the university. Their numbers may vary slightly, but they said headcount trends were fairly represented.

ISOM and FCS’ numbers were either reported incorrectly or misrepresented by the Fact Book data for different reasons.

WHERE ISOM’S ISSUE CAME FROM

ISOM, like FCS, has made strides in growing its department and opportunities these past few years.

The department recently benefited from university and state approval for its new business analytics major and the transformation of its operations management major into logistics and supply chain management. It’s expanding and revamping its degree offerings.

This spring, the department has 24 students in the senior capstone class that are graduating, Zhao said. Twenty of them have jobs lined up and only four are still looking for jobs, which means about 83 percent of them all had jobs prior to graduation.

This reason and others made it confusing as to why the department had seen such a large decrease, according to Fact Book data. 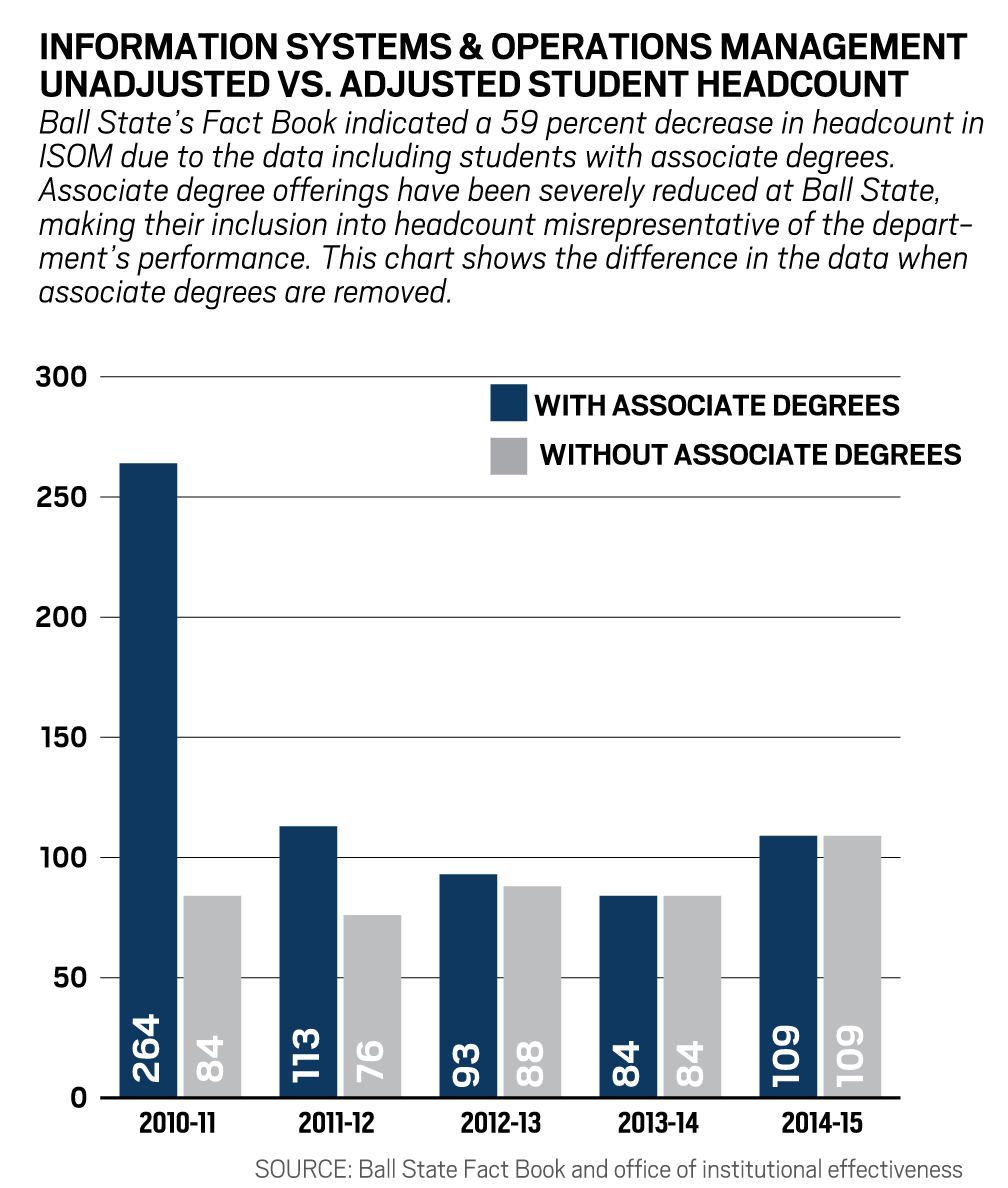 “[The Fact Book data] is definitely inaccurate. I am 100 percent confident because in the last four years [as] department chair I witnessed the growth of our majors,” Zhao told the Daily News when it began its investigation.

It turns out, the data was misrepresentative but still correct.

The steep decline in students from Fall 2010 to Fall 2012 is in the Fact Book because those years included students pursuing associate degrees. Ball State began eliminating most of its associate degree offerings in 2010-11.

If associate degree students are excluded from the Fact Book data, enrollment increased in the ISOM department.

Both sets of numbers are accurate. The issue is how the data is looked at.

“I feel strongly that it would be inappropriate to highlight that big decrease because the university, not the ISOM department, made the decision to greatly scale back associate degrees,” Knight said. “This was not the department's doing and not a reflection that the department did anything wrong or its programs suddenly became unpopular.”

WHERE FCS’ ISSUE CAME FROM

Unlike ISOM, family and consumer sciences’ error stems from a mistake made when compiling the department’s Fact Book.

While the grand total headcount by enrollment status — which covers undergraduate and graduate students — was wrong, the sum of each of the subtotals by gender, race and in-state and out-of-state were correct. Knight said he wasn't sure what went wrong when the numbers were calculated.

“It is not clear to us what the problem with the query was, but the good news is that the 2011-12 numbers in the 2015-16 edition of the CAST Fact Book (which I am reviewing now and we should have posted next week) are correct, so the problem was only for the numbers shown in the 2014-15 Fact Book,” Knight said in an email. 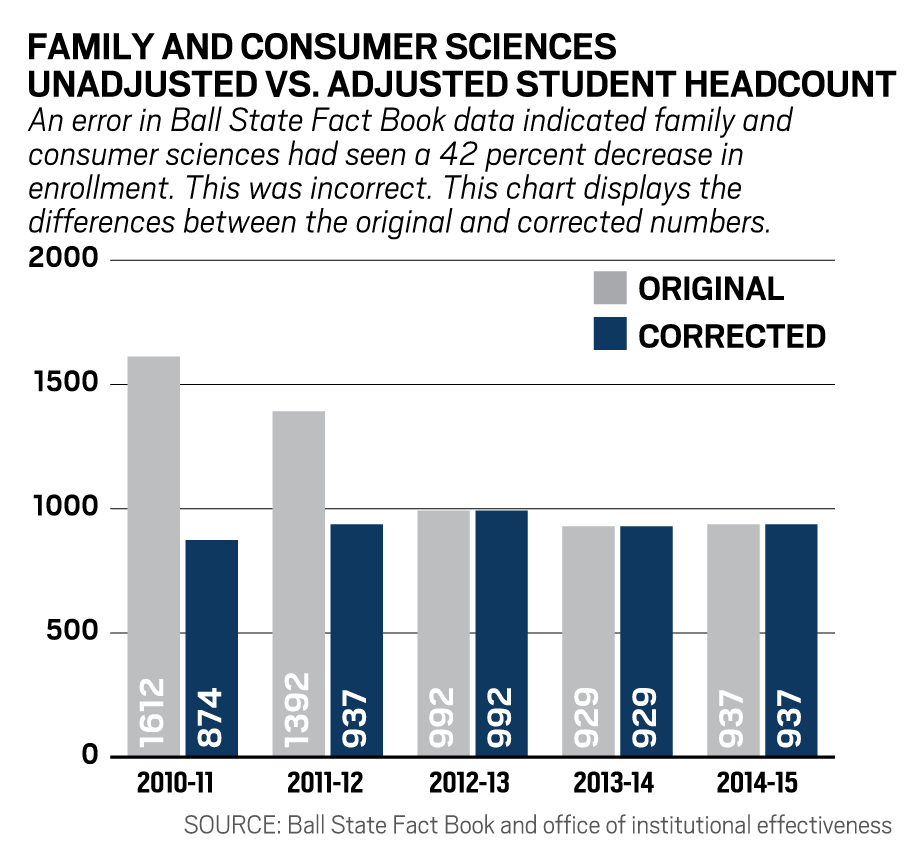 This correction indicates that FCS has grown over the past the five years — headcount is up by about 7 percent.

Even so, headcount isn’t everything. Departments often use other types of data, such as credit hours, to look at their performance and growth, rather than rely solely on the headcount of students in their department.

“I don’t know about other departments. I can only tell you about FCS. If the numbers are incorrect for us, most likely they will be incorrect or maybe not as accurate as they should be [for others],” he said. “In our case, if you don’t look at the online [credit hours], you will see the incorrect picture.”

Some discrepancies in the Fact Book are expected, given the 46-plus departments recorded, Knight said. Each department may have its own goals and ideas about how to handle its programs, but that’s not what usually causes problems.

It’s those differences in how departments define measurements and when they pull that information that make looking at headcount and other metrics difficult.

Ball State records its Fact Book data after the first week of the semester, which doesn’t account for any changes made during the semester. The numbers are fluid.

“In a large, complex university such as Ball State, there are changes every day [with] students dropping or adding classes, changing their majors and changing their addresses,” Knight said. “If someone runs a report from Banner on any of these things on any day after the census date, the numbers are going to change.”

“Our office is always happy to share details on who we are counting in any of our reports so that we can understand where our underlying assumptions or definitions may be different than that of another office,” Knight said. “When we get to that level of detail, differences are resolved quickly.”

Knight’s office determined the issues with ISOM and FCS’ data in a matter of days, issuing a corrected Fact Book for College of Applied Sciences and Technology.

While the office of institutional effectiveness did rectify these errors quickly, some people have concerns about the culture of transparency in university data, which doesn’t necessarily reflect on Knight and his office, Paul Ranieri, an associate professor of English, said.

Ranieri, a former chair for the English department, said data collection at a comprehensive university is hard. He’s sensitive to the work Knight does. However, he does wish there was more communication between departments and the university when collecting data. He said the data oftentimes is opaque and difficult to decipher.

However, the department chairs the Daily News spoke to all expressed satisfaction with the accessibility and reliability of Knight’s office.

“Whenever I’ve needed to get the numbers, I [called] Bill Knight’s office for some assistance, and they’ve always been very helpful and I’ve always gotten what I needed,” Pat Clark, chair of elementary education said. “I haven’t had any trouble with them.”

See anything that doesn't look right? Email the author at afhovorka@bsu.edu.

By Staff Reports / 20 minutes ago