2000 – Council on the Environment (COTE) is created

2014 – Julie Hopwood, senior advisor to the president, joins COTE as a presidential representative

Jan. 25, 2016 – The Board of Trustees announces Ferguson’s resignation via email and Terry King, the provost and vice president of academic affairs, assumes the position of interim president 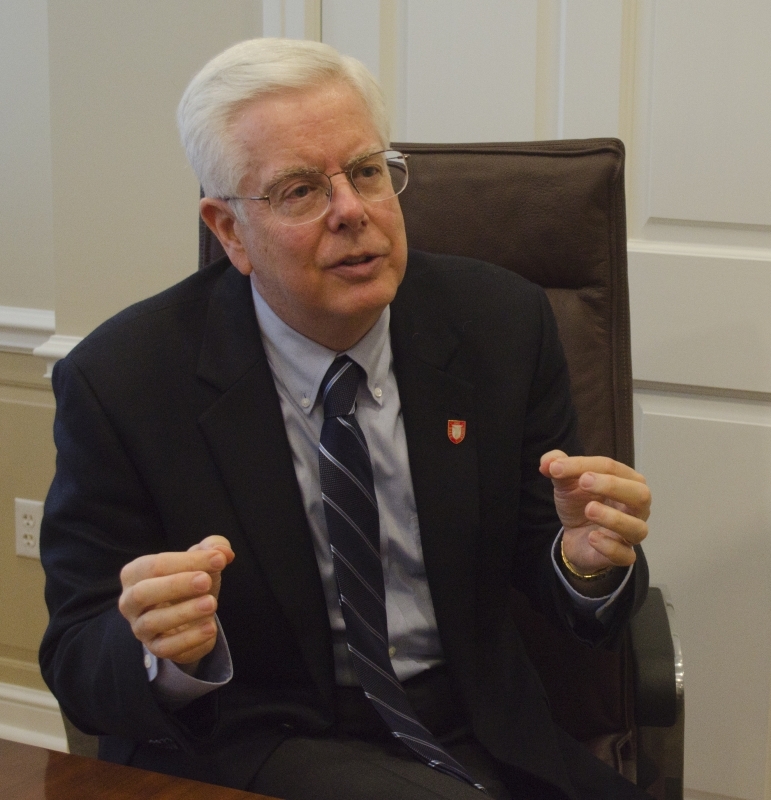 After the announcement that former President Paul W. Ferguson's resignation was a "mutual decision," faculty and students wanted to know why he was leaving. In addition, half a million dollars will be going to Ferguson, coming from student and taxpayer's pockets. DN FILE PHOTO BREANNA DAUGHERTY

Sustainability has long been a priority at Ball State, something often furthered by university leaders.

But former President Paul W. Ferguson brought a different level of involvement to Ball State’s carbon-reducing plans and commitment-signing, said John Vann, an associate professor of marketing and member of the Ball State University Council on the Environment (COTE).

“I felt so good when [Ferguson] was here, and I feel sad that he’s gone because he was so much on board without delay with sustainability and climate issues,” Vann said.

Fortunately for Vann, Acting President Terry King has confirmed his commitment to Ferguson’s sustainability initiatives. The ones in the works will continue.

Vann and other COTE members' plans include a faster route to campus carbon neutrality — an initiative adopted with good reason.

Not only is sustainability important for the simple things, such as the long-term survival of the human race — as Vann puts it — but students applying to colleges are interested in their potential school’s commitment to environmental issues. About 60 percent said they’d consider it during their college search, according to a 2015 Princeton Review survey.

The university has addressed environmental issues since at least 1991 when the first Ball State green committee formed. The university was also one of the first of more than 600 colleges to join the American College and University Presidents’ Climate Commitment — a promise to go climate-neutral as soon as possible.

In 2010, the university resolved to reach carbon neutrality, or bring its carbon dioxide emissions to net zero, by 2050.

Recently, discussions began on reducing the time frame for that goal. The year 2030 popped up in COTE meeting discussions, said Robert Koester, the COTE chair.

Ferguson, whose job before Ball State was at a university that boasts a tradition of dedication to sustainability, created the President’s Sustainability Working Group in December 2015 and appointed members from different sectors of Ball State to its ranks.

The group would look into the feasibility of reaching carbon neutrality by 2030, and it serves as a direct line to the president for its sustainability-minded members.

This wasn’t the first time Ferguson took steps to increase his connection to Ball State’s environmental leaders. Julie Hopwood, his senior advisor and interim vice president for strategic communications, joined COTE as a presidential representative soon after she came to Ball State.

“That was a breakthrough moment,” Koester said.

It amplified the importance of what the council had already been doing, he said.

The president’s working group has already submitted some of its findings about reaching carbon neutrality faster to King, but Koester said he expects more meetings about the plans to come in the following months.

By mid-summer, however, he said he thinks King will have enough information to approve the working group’s plans if he wants to.

“I think that there’s no reason to wait for some new appointment for a new president,” Koester said.

As for that new president, Koester hopes the university will choose him or her with their commitment to sustainability in mind.

Before Ferguson’s appointment, COTE passed a resolution asking the university to make candidates' understanding of Ball State’s pro-environmental legacy a criterion in its presidential search.

Koester said the council might pass a similar resolution soon.

It’s important to have a university president who is interested in sustainability, Vann said.

“When the president gets on board, that makes it okay for everyone else to be on board, as well,” he said.

And Ferguson was on board from the very beginning, both Koester and Vann said.

In Case You Missed It: Ball State alumnus Braxton Williams shares how he hopes to help others through his book, "The Infinite Horizons"

By Taylor Smith / 8 hours ago

Every afternoon, when the bell rang for lunchtime and his classmates’ stomachs grumbled at the thought of chips in their lunchboxes, Braxton Williams swung his backpack over his shoulder and made his way to reading class.