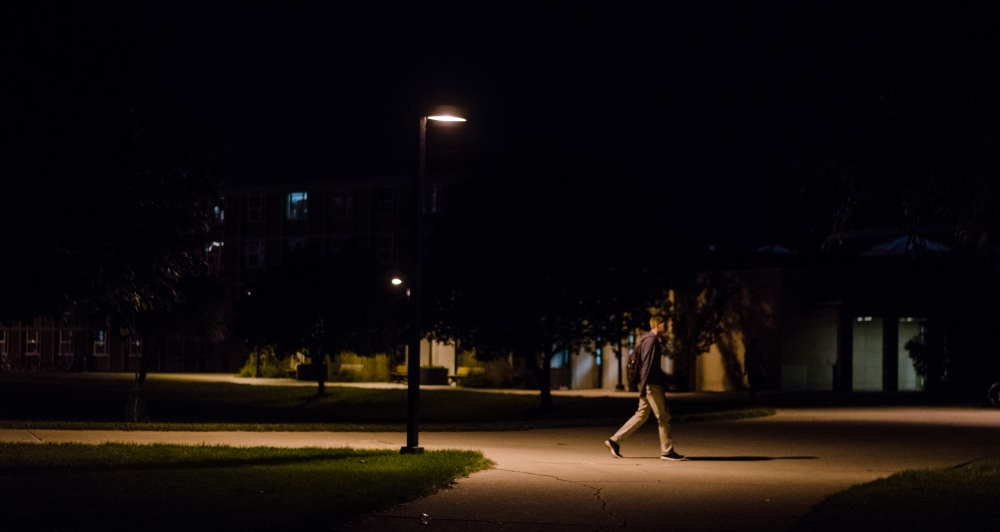 Students have started saying they feel unsafe when they walk around campus at night because of the lack of street lamps. One student said the North Quad and Cooper Science are two of the poorest lit areas. DN PHOTO KELLEN HAZELIP

Some students say they feel unsafe walking around campus after dark because of the lack of lighting on the sidewalks.

Stevie Jarrett, a sophomore fashion major, and Candice Kreuzman, a sophomore geology and zoology major, both walk around campus late at night.

Jarrett said she tries not to stay out later than 9 p.m. because she lives in Elliot Hall.

“I think over by Studebaker East and Noyer Complex is well lit, but when you get over to North Quad it’s not,” Jarrett said. “Cooper [Science Building] is actually the worst.”

Kreuzman said when she walks around campus, she thinks some places are well lit but others are not.

“Walking from the library can be scary sometimes,” Kreuzman said.

Both said there should be more lighting around campus. Jarrett said she wants to be able to see her surroundings better, while Kreuzman wants to feel safer.

Kreuzman said her guard goes up when she walks by a group of people.

“You never know what is going to happen,” Kreuzman said. “During the day, I walk around with headphones in, but at night I won’t so I can hear everything around me.”

Jarrett said she tries to text her friends so they know where she is. She also gives her friends the time she should arrive at a destination so her friends know something happened if she didn’t show up at a certain time.

Ball State has several safety tips for students, including walking in well-lit areas, traveling in groups of two or more at night, and staying away from shrubs, dark doorways and alleys.

Another tip is to know the location of the emergency telephones, which are located around campus. These are the poles topped with a blue light, which allow a person to call for help by pushing a button.

Kreuzman said she feels a little safer at night because of Charlie’s Charter, a form of transportation for Ball State students.

“[The problem is] it doesn’t run on weekends, so you’re screwed,” Kreuzman said.

By Staff Reports / 38 minutes ago