Bout- a round of fencing in which score is kept

Epee- a sword with a triangular cross-section blade, a light dueling sword

Foil- a sword with a rectangular cross-section blade, a sword less dangerous and used for practice

Parry- blocking an opponent's attack with a sword

Sabre- sword with a flat blade and knuckle guard, historically used by calvary

The fencing team practices from 9-11 p.m. on Tuesday's, Wednesday's, and Thursday's at the Recreation Center, and is open to all. 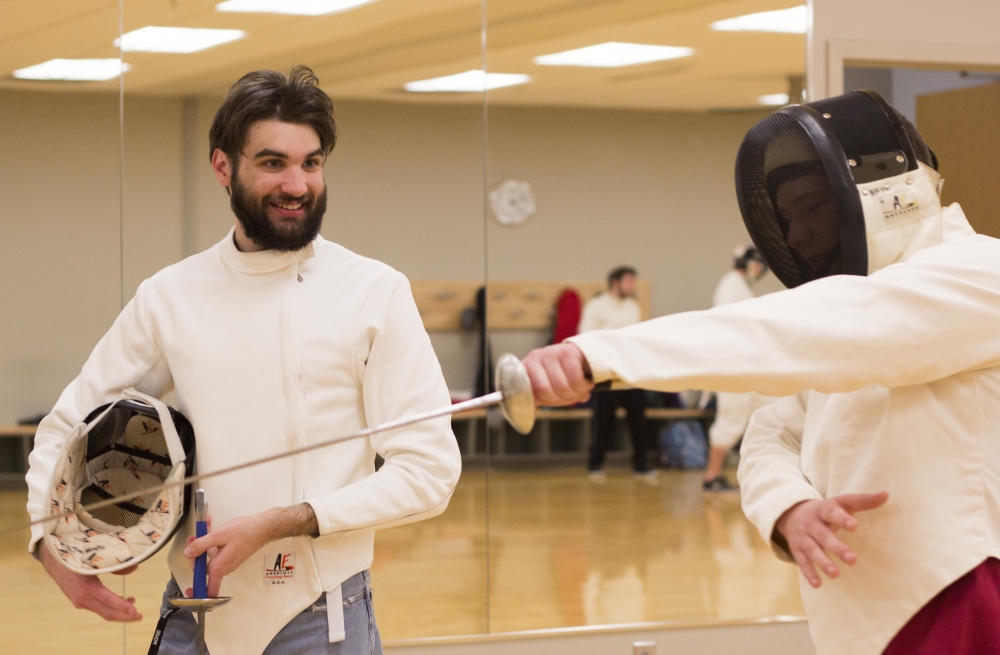 For three nights a week, a room in the Jo Ann Gora Student Recreation and Wellness Center transforms into a hub of sabres, foils and epees.

Ball State’s fencing club has been coached by alum Brian Koby since 2007. He joined fencing club during his freshman year in 2001 and came back to coach after graduating. Koby said that the club defined who he was in college and so he wants to give the students “everything I have to offer.”

Part of the commitment as coach is a 30-minute commute three nights per week, after working during the day as a facilities manager at McDonald’s, to lead practices on campus.

Koby said one of the greatest things he’s seen is the look on one of his fencer’s faces after they’ve won their first bout.

“It brings a lot of joy to me and makes me feel like I’m actually doing something right. It’s an amazing feeling that I would have never thought in 100 years that I would have felt, and then the first time it happened, I was ecstatic,” Koby said. “I’ve made so many great friends in the fencing club that I can’t think of where I would be today without half the people I met in the club, so I just give back to it as much as I possibly can.”

Story continues after this video.

Sophomore French education major Joe Monroe fenced in high school and got involved with the club through a friend. He became assistant coach this past January. Monroe likes the mental action that goes on during a match as well as interacting with and teaching club members.

“I would say, in general, one of the things that I don’t think a lot of people expect is that it is a very social sport and the entire fencing community really does get together,” Monroe said. “All the veteran fencers at the tournaments I’ve been to that have known me for a solid three minutes are willing to sit down and help you improve your skills. Even though people think it’s individualistic as far as competing goes, outside of that it’s really a huge community that is very close with each other.”

Katlin Bales, a freshman animation major, joined at the fall activity fair because it was something she had always wanted to do. She immediately bought a fencing suit and decided to take the opportunity to join because it’s not something common and she had watched it on TV.

She hopes to compete in the future.

“It’s one of those things that you always think would be cool but never picture yourself doing, but I took the opportunity," Bales said. "[My favorite part] is being able to actually relate to people and being able to sword fight for fun.”