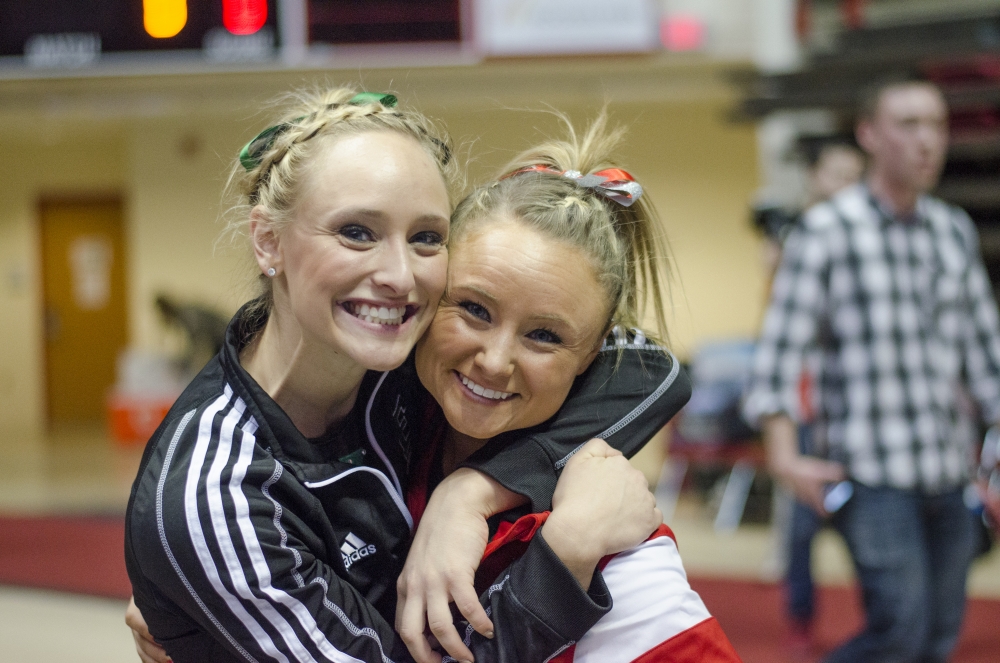 Kimberly and Sarah Ebeyer pose for a photo after the meet against Eastern Michigan and Illinois State on Jan. 24 in Worthen Arena. Kimberly performs for Eastern Michigan, who won the meet. DN PHOTO BREANNA DAUGHERTY

Siblings do not often get to compete against each other at the collegiate level, but two sisters from Greenwood, Ind., had that opportunity at Worthen Arena.

Growing up, Sarah and Kimberly became close because of the sport and grew up competing with each other.

“It was incredible, honestly. We really bonded together as sisters because of gymnastics," Sarah said. "Gymnastics is one of those sports where the lingo of it is extremely hard to understand, so having someone so close to you completely understand what you’re saying and how to help is just amazing."

Sarah and Kimberly both grew up competing at Wright’s Gymnastics in Indiana. The duo were both level 10 gymnasts — the highest level in the USA Gymnastics Junior Olympic program.

Both competed through high school and earned numerous honors on the way. Sarah was a level 10 state champion as a sophomore, a Junior Olympic national qualifier as a junior and senior and earned Most Valuable Gymnast title as a senior.

Sarah was the youngest of the pair, so when Kimberly went to college, she was on her own competing for the first time as a senior in high school.

“We did everything together, so having her go away for that first year was extremely hard," Sarah said. “I think being in college has brought us even closer, and it’s just so exciting being able to share the same dream for the same sport."

Over the years, the bond the sisters share doesn't end in the gym — it extends into their everyday lives.

Prior to competitions, the two shared a similar pre-game warm up.

“Everyone is different before they compete. For me, I am someone that needs to dance or sing, and [Sarah] is the same way. We would go up to each other and say, ‘You can do this, you know how, you’ve done it before,’” Kimberly said.

“It’s almost more focusing completely on things unrelated to gymnastics up until the point where you’re getting on that event and your body just does what it knows how to do," Sarah said. "It’s really just distracting each other by dancing, having fun, laughing and smiling, and that’s how we perform best."

Growing up, the two always shared the same coach, and despite going to compete at separate Mid-American Conference schools, the sisters say the change has only been positive.

“Dealing with different coaches is definitely different,” Sarah said. “In club, we had the same coaches and a lot of the same skills, but now we have more variety, so being able to call each other up and ask for advice is amazing.”

Kimberly went on to add, “it’s almost like you have two teams and double sets of coaches."

Even competing at separate universities, the two have kept the competition strong and have maintained a friendly environment.

The competition between the two is still fierce, but Kimberly claims it's not in an "I'm going to beat you" type of way.

"It [is] a good type of competitive, very friendly," Kimberly said.

“We always hoped for each other to do well — always," Sarah said. "It’s definitely a healthy competition. We love how it really just pushes each other to be our best."

Both of the sisters competed in the vault, beam and floor exercises during the tri-meet.

Eastern Michigan went on to take the meet, but Sarah and Kimberly will find themselves in a very similar scenario in mid-March during the MAC championships in Muncie.