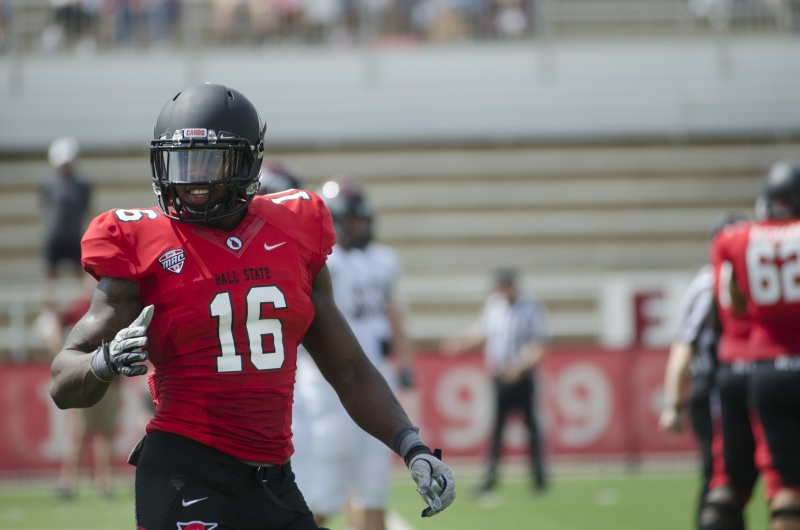 Next season, the Ball State football wide receiving corps will be led by Mabon as he returns as the most experienced skill player in his fifth year.

Mabon is eligible for a fifth season after being redshirted in his 2013-14 season due to a season-ending injury three weeks into the campaign.

“I’m kinda looking forward to it, in some aspects,” Mabon said. “It’s more pressure that I’m the number one guy."

Opposing defenses will be facing a very familiar-looking Ball State football team. Riley Neal will be in his sophomore season, and the running game led by junior Darian Green and sophomore James Gilbert will be much of the same.

Mabon only had one word to say when asked if he would be doing the same thing.

Looking toward next year, the then redshirt senior will be focal point for Neal, as he will be without both Williams and fifth-year wide receiver Chris Shillings.

Mabon finished the season with 70 receptions for 745 yards and two touchdowns, similar numbers compared with his 2013-14 season, despite the injury earlier in the year.

Next fall, Mabon will have an opportunity to further etch himself in the career record books for Cardinal receivers.

Right now, Mabon is 10th in receiving yards (1,890), seventh in most passes caught (159) and sits just outside the top 10 in most touchdown passes caught with nine in his career.

While Mabon may be the most experienced option as a wide-out, he will not be the only returning receiver. There will be several other receivers returning to whom Neal has already grown accustomed.

Juniors Cywettnie Brown and Aaron Hepp, along with sophomores Jordan Hogue and Corey Lacanaria, will provide depth to the unit, along with several others.

“I wouldn’t say [I'm the] only guy because we have a lot of guys coming back, but I have to be that number one guy without having someone else on the other side that’s proven,” Mabon said.

Head coach Pete Lembo saw Mabon’s play improve toward the back-end of this season. In the final eight games of the season, he a had at least four catches in every game.

He had two 100-yard receiving nights, and fell just 1 yard short of the century mark against Northern Illinois.

Perhaps his biggest performance of the season came against Ohio on Nov. 17, where he proved that he was also a threat as a return man.

“[Mabon] had a very good night with several big catches, two or three very good kickoff returns — he had over 300 all-purpose yards ” Lembo said following Ball State's loss to Ohio. “He’s become a big part of the energy of our offense, and it’s good to see him emerging in more of a leadership role, in understanding that he can bring energy and he can bring charisma to the unit. I think he’s done a good job of helping [Neal] progress, too.”

Mabon will be the most experienced skill-player on the Cardinals' offense next year, and opposing defenses will be targeting him.

“It will be difficult just to know the team’s will be rolling coverages toward me and knowing that I will be doubled on almost every single play, but I like the challenge,” Mabon said. “I think I’m up for it.”