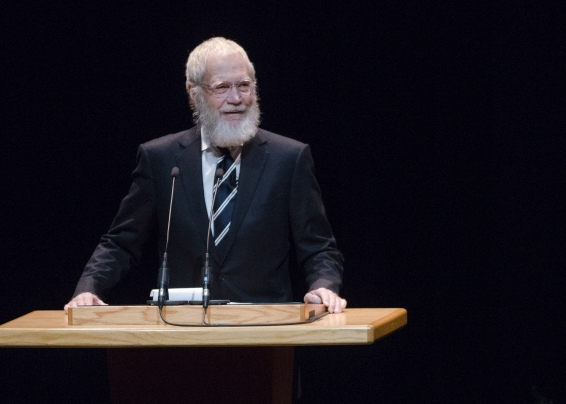 Letterman returned to campus this year for the first time since 2012 and more than six months after the end of his late night talk show to interview the filmmakers. Their conversation included a discussion about success and how to achieve it with real-world experience.

The event began with a video highlight reel of “The Late Show with David Letterman” to the music of the Foo Fighters' song "Everlong." It was followed by another video that showed Ball State students camping out for tickets to attend the event.

Ball State President Paul W. Ferguson set the tone for the night by revealing the "David Letterman Experience," a collection of  awards and memorabilia from Letterman's career that he's donated to the university. The items will be displayed in the David Letterman Communication and Media Building.

Letterman talked about the actual Letterman experience, or what it's like to be him, by telling stories about his family’s Thanksgiving and being recognized in public.

The theme of experiences didn’t stop with Letterman’s lighthearted anecdotes. Jonze and Miller, both award-winning directors, talked about their experience in the film industry.

Check out a photo gallery of the event here

Jonze, the director and writer for several critically-acclaimed movies including “Her,” did not attend college nor film school. He said that in Hollywood, “they never asked for a diploma.”

Instead, he learned how to direct films by starting with photography at a BMX magazine. He said he moved from taking photos to shooting skateboard videos and music videos and, finally, to movies.

Though Miller did go to college, he never graduated and earned his degree. He, as well as Jonze, credited his knowledge in the field to hands-on experience.

Miller said he knew he wanted to make movies around the age of 12 and became dedicated to learning and getting experience in the field.

The filmmakers also talked about their experiences as directors and the tension between directors and production companies who want to change aspects of movies and may go against the director’s vision for a film.

Jonze also talked about the process he takes when approaching a film.

“I start with this feeling inside me and try to get that feeling through this complex process which is filmmaking,” Jonze said.

Hesslar works for Ball State’s student radio station, WCRD, and said Letterman inspired her to get into radio.

She said she appreciates Ball State’s emphasis on student media and getting field experience before graduating.

“I have so many of my classes just in the David Letterman Building, and just walking around upstairs and knowing that building is there because of him—it really makes me proud to know that he was here and how much he’s helped,” she said.

By Associated Press / 22 hours ago