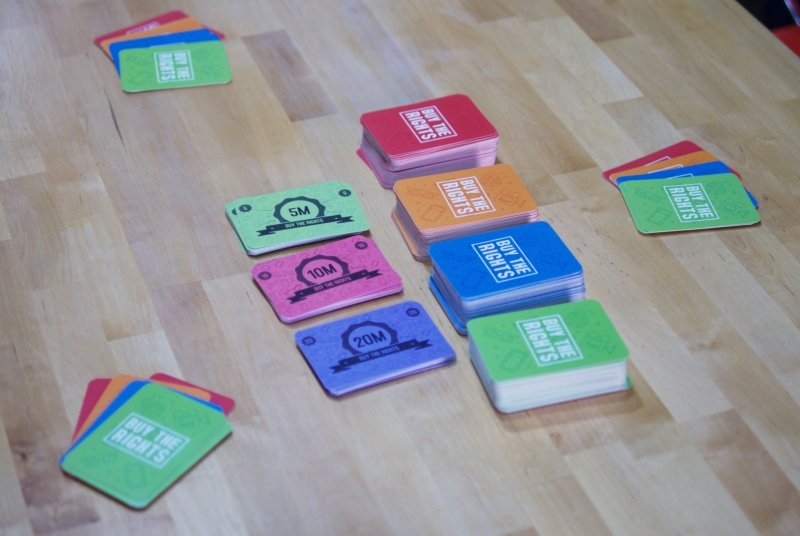 Buy the Rights is a party game created by four Hoosiers with Ball State connections. The creators are hoping to start manufacturing the game for a wider audience. PHOTO PROVIDED BY TOMMY DAY

Take away the R-rating of Cards Against Humanity, up the family-friendliness of Apples to Apples, throw in a movie theme and what emerges might be the biggest hit at family gatherings in 2016.

It’s a movie-themed party game called Buy the Rights, and it was created by four Hoosiers with Ball State connections who are now hoping to market the game to a wider audience.

Tommy Day, a former Ball State student, came up with the idea for Buy the Rights late in the fall of 2014.

Day and his partners, who are also his best friends and girlfriend, will bring the game to a demo night at Aw Yeah Comics Dec. 2.

The game consists of four categories of cards: movie genre, hero descriptor, hero and plot. One player is the producer and the others are screenwriters. The screenwriters will pick one card from each stack and come up with a movie pitch based on the four cards.

The “screenwriters” pitch their movie plots to the producer. The producer has $20 million to spend on his or her favorites. The player with the most money at the end wins.

“I guess I’m just a pretty big movie fan,” Day said of his inspiration for the game. “One day we were playing a party game and I had the idea.”

It didn’t take long for Day to get others involved.

Tommy Day and his wife, Riley Day, who will be graduating from Ball State in December, sat down and wrote about 20 index cards to test out their idea. They took the prototype to the house of their friends, Chad and Michelle Yadon.

The Yadons liked the game and helped think of ways to improve it. The group came up with ideas for new cards.

The best friends call themselves Literally Wizards. Tommy came up with the company name.

“I just thought it was funny, and then I had an illustrator come up with a cool logo and it kind of stuck,” he said.

Literally Wizards continued to develop and improve Buy the Rights, and it was selected as a showcase game for the 2015 Boston Festival of Indie Games in September. In Boston, the group showed the game to over 100 people of different age groups. They received good feedback, Tommy said.

Next came a “Buy the Rights Live” event on Nov. 6 at the Harrison Center in Indianapolis, where local comedians played the game live on stage. This event was part of Indianapolis’s First Friday series.

Now, Literally Wizards has a Kickstarter campaign for the full version of Buy the Rights, which they hope to distribute in 2016. The funding will go toward manufacturing and shipping costs of the game for those who have pledged their support.

If the campaign fails, Literally Wizards will try another in early 2016, Tommy said. But he’s confident it will get funded.

Riley likes looking back on Buy the Rights’ journey.

“It’s been exciting to see [the game] evolve from a game we played with our friends on index cards to the fleshed out prototypes we currently take to conventions and events,” Riley said.

By Associated Press / 10 hours ago

By Hannah Amos and Abigail Denault / 21 hours ago