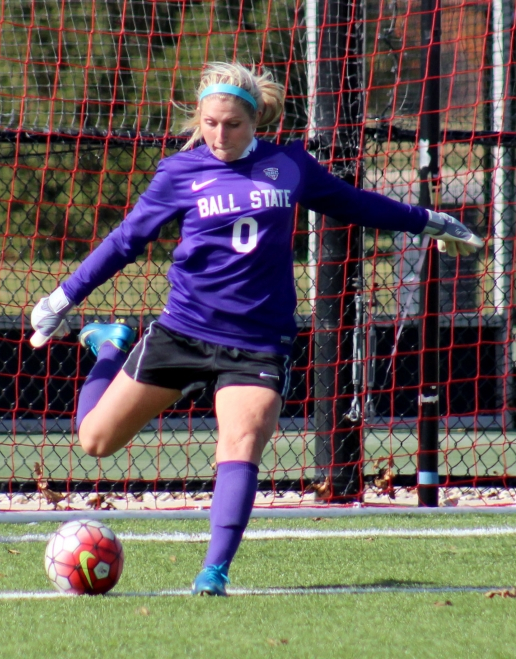 Sophomore goalie Alyssa Heintschel attempts to kick the ball into the field in the match against Buffalo on Oct. 25 at the Briner Sports Complex. DN PHOTO ALLYE CLAYTON

Alyssa Heintschel has been the starting goalkeeper all season long, while maintaining a 4.0 GPA in her chemistry studies. Due to her efforts she was named to the Academic All-District Second Team for women’s soccer.

Heintschel has dominated all season long, allowing only 0.674 goals against average, which puts her at 35th in the country on her way to being selected for the District 5 second team.

She has accumulated to most minutes of any Cardinal thus far this season, starting 19 games in the 20 matches she has played.

There have only been two instances this season where Heintschel has allowed more than one goal in a match.

The Cardinals came to a rapid end during their penalty kick loss to Akron on  November 1st.

Being only a sophomore, Heinstchel will continue to lead the Cardinals defense over the next two seasons. She is the 11th Academic All-District selection in the soccer program's history, becoming the first one to be named since 2012.

By Indiana Capital Chronicle / 5 hours ago

By Associated Press / 12 hours ago