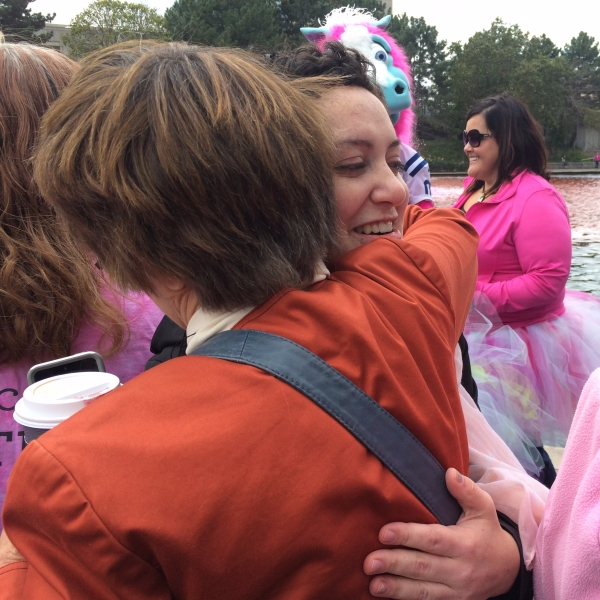 Sarah Stockton spoke in front of a crowd of people at the Indianapolis Canal Walk. Crowd members listened to her testimony of how she underwent treatment for breast cancer and graduated college in less than a year. DN PHOTO DANIELLE GRADY

It wasn’t Sarah Stockton’s first time speaking in front of a crowd of people. She had been a public communications major and member of the debate team at Ball State after all.

This time, however, she wasn’t arguing a point or giving a class presentation. Her words would reach complete strangers. They would have real impact.

She stepped in front of her audience: a crowd of people gathered at Indianapolis’ Canal Walk. They were there, in part, to listen to Stockton’s testimony: the story of how a 21-year-old learned she had breast cancer, underwent treatment, completed an internship and graduated from college—all in less than one year.

No other cancer survivors talked at the Oct. 2 Pinking of the Canal, the Indianapolis Colts' kick-off event for breast cancer awareness month.

The Stockton who assuredly addressed a sea of pink wasn’t the same one who received a cancer diagnosis. During that time, Stockton admitted her preferred method of communication was none.

Stockton's cancer battle began with a missed call on Nov. 6. Well, several calls—one from her doctor, her mother and her father. She received them during Spanish class.

This might not have concerned Stockton, but she had recently undergone testing after discovering a lump on her breast.

The following Monday, she found herself at the Indiana University Melvin and Bren Simon Cancer Center. It would be the first of many visits.

“I remember when I got home that day, I was just mad. I didn’t want to talk about it,” Stockton said.

Instead, she turned to her parents and cracked a sarcastic joke. They didn’t laugh.

Tojo, who is a senior public communications major, met Stockton when they both rushed Kappa Delta five years ago. They initially bonded over their shared faith, but Tojo said from there it was “anything and everything” that strengthened their friendship.

Stockton and Tojo were living together when Stockton was diagnosed.

Tojo was “shocked” when she heard. Not just shocked—terrified. Tojo had lost people to cancer before, but she tried to keep her past from affecting her.

“I think that was the most challenging part: don’t be sad or anything, because it’s not time to be sad," she said. "It’s time to make sure your friend’s okay.”

Aiding Stockton with snark became one of Tojo's duties. They would make jokes in their apartment about the situation. Humor became Stockton’s friend, she said.

“I just didn’t know what else to do and that was my form of talking about it,” she said.

Meanwhile, she hadn’t told the rest of her sisters in Kappa Delta about her diagnosis. Tojo became her mouthpiece.

At a fall philanthropy event that Stockton didn’t attend, Tojo gathered her sorority sisters together. Her hands shook as she spoke into a microphone, telling the gathered women that Stockton had cancer.

Hands flew to mouths and some people shed tears. Tojo didn't — she had done enough crying, but she could sympathize.

“It’s a hard thing to react to I think,” she said.

The sorority members wanted to help, and eventually they did. Tojo set up a GoFundMe page to help pay Stockton’s medical bills.

Meanwhile, Stockton left Ball State after fall semester ended and returned to her home in New Palestine, Ind. The people around her told her she could take a break and spend her time sitting on the couch.

“I knew that was okay, but I didn’t want to,” Stockton said. “Instead, I worked, I read, I watched movies. I did everything I could [but] focus on what was going wrong.”

Her work took her to the Indiana Statehouse, where she interned with the Indiana House of Representatives. She didn’t talk about her diagnosis with her co-workers, at least when she first met them.

But talking about it was becoming easier. Stockton’s real turning point came in April, when Ball State’s Panhellenic Council threw her a fundraising ball. They raised $6,275, according to a Daily News article from last year.

Stockton attended the ball—one of the few times she visited Muncie during the Spring Semester.

“That’s kind of when I felt myself emerging and wanting to talk about it more,” she said.

People were curious about Stockton’s diagnosis, Tojo said. Some were confused about her treatment, or were unaware of what a mastectomy was. They asked Stockton questions.

She never made anyone feel awkward or bad about their curiosity, Tojo said.

“She dealt with it gracefully,” she said.

Stockton returned to New Palestine able to talk about her cancer more openly, but it wouldn't be her final obstacle. The cancer still lived inside her.

The following months would bring a bilateral mastectomy, or the removal of both of Stockton’s breasts, as well as radiation therapy.

Today, Stockton is “cancer free” — as far as she knows. She’s undergoing long-term treatment — a shot a month and medication every day.

“Most days are good days,” she said.

Stockton didn’t get to walk at graduation, but she did receive her bachelor’s degree after the spring semester ended. It isn’t in the majors she had intended — political science and public communications — but she can still say she is a college graduate.

She also continues to work at the Statehouse, albeit as a finance intern. She’s in the field she wants to be in.

And even though she can’t say it without a grain of incredulity, she’s become a spokesperson for people with cancer by speaking at events like Pinking the Canal.

Tojo is as surprised as Stockton but not for the same reasons.

“I have no doubt in my mind that she’s able to stand in front of people talking about her experience, it’s just that I was shocked that she wanted to,” Tojo said. “I was surprised because she’s so humble. She’s one of the most humble people I’ve ever met in my life. She would never go to great lengths to talk about herself.”

Stockton is what Tojo said. She felt slightly embarrassed when people applauded during her speech when she said she graduated from college.

But it took her long enough to start talking and she isn’t going to stop now.

“I’m proud to be someone who can kind of be a voice for people who are more scared and don’t want to talk about [cancer],” Stockton said.