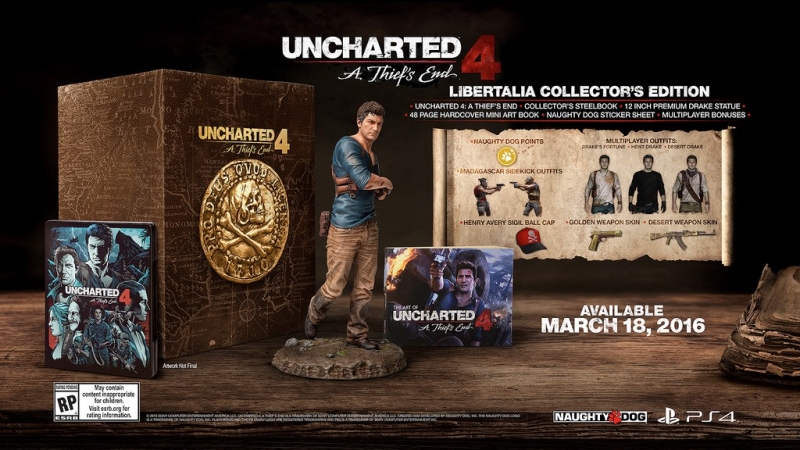 Uncharted 4: A Thief's Friend will be released on March 18, 2016. The PlayStation blog has announced a slew of bonus content in reward for pre-ordering.

Uncharted 4: A Thief's Friend will be released on March 18, 2016. The PlayStation blog has announced a slew of bonus content in reward for pre-ordering. There are two limited editions of the game, each with their own goodies.

Uncharted 4: A Thief's End Special Edition can be bought for $79.99 and has a collectible treatment and a behind-the-scenes look at the game's development process. Features include a hardcover art book and a sticker sheet.

The second edition, Uncharted 4: A Thief's End Libertalia Collector's Edition, is $119.99. It has all of the features of the aforementioned special edition, but also posses even more features. A 12 inch Nathan Drake statue, an Avery Sigil ball cap and additional outfits and weapon skins are all included.

As for digital purchases, the Digital Deluxe edition will be available for $79.99. This version will be up for pre-orders later in the week. Some of the included features include access to first single-player story and automatic unlocking of two multiplayer items.

Depending on the retailer the pre-order is bought from, different content will be available. GameStop offers a Multiplayer Booster Pack, Amazon has a Snow Camo weapon and the PlayStation Store has the Thief's End Dynamic Theme and Desert Weapon Customization.

Uncharted 4: A Thief's Friend is an exclusive PlayStation 4 release.