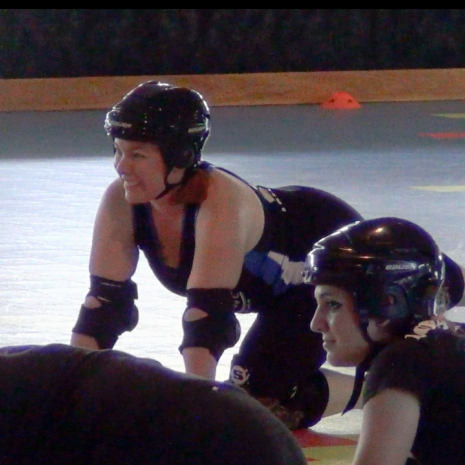 It’s a Monday afternoon and Sarah Gremer is wearing a bright, red dress. It matches her hair, which is smartly styled into loose curls.

She looks nice, but then again, she’s expected to dress professionally as the primary departmental adviser for Ball State’s Department of Physiology and Health Sciences.

She spends most of her day behind a desk, meeting with students and making sure they’re on track to graduate.

Many people probably wouldn’t think, just by looking at her, that she spends some weekday evenings and Saturday mornings dressed in athletic wear, sporting pigtails and slamming into other women.

Gremer probably wouldn’t have guessed that about herself if someone had asked her in 2013.

That was the year before Gremer joined the Cornfed Derby Dames, Muncie’s roller derby team. Roller derby is a game often played by all-female groups and known for its physical nature. Players block and jostle their opponents to keep them from skating around the track and gaining points.

Gremer, who also goes by her roller derby name Aria Kiddinme, talks about her love of the sport in paragraphs. It’s her “therapy,” a time to focus, the source of a built-in social network.

Before she joined, however, her conversations about roller derby were dominated by excuses.

Then Gremer attended a roller derby game in Indianapolis. Seeing skaters fall down and injure themselves didn’t scare her away from the sport. In fact, it did the opposite.

She found herself emailing the president of the Cornfed Derby Dames to ask her about the team’s practice times.

“I figured this would be the end of it,” Gremer said. “Once she told me when the practices were, it was going to be done.”

It wasn’t. The practices were in the evenings, after Gremer had coaxed her children into bed, and on weekend mornings. 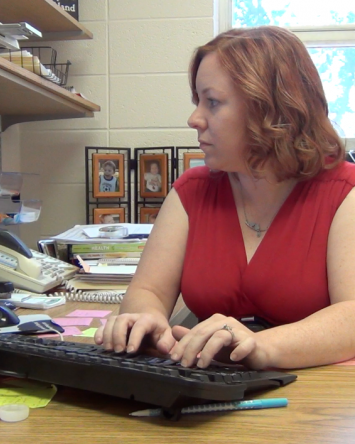 “My first practice, all I did was skate in circles,” she said. “I couldn’t hardly stand. I couldn’t stop. I couldn’t really do anything.”

But at the end, the roller derby team cheered for her.

“It just made me feel very welcomed,” she said.

Many of the people on the team resembled her, too: mothers in their 30s with full-time jobs.

Then again, there were other team members who were much different. That’s what’s wonderful about derby, Gremer said. Anyone can join.

Gremer convinced Henderson to join roller derby at a going-away party for a mutual friend.

“When you’re hanging out with a bunch of academics, it’s not the social circle where you’d think you’d run into the people who do derby,” Henderson said. “But I did and I got hooked.”

The women she skates with are Muncie locals and transplants, students, athletes and non-athletes. Gremer isn’t the only Ball State faculty member on the team either.

“We all find a common ground even though our upbringings and backgrounds are different,” Henderson said.

Henderson joined the Cornfed Derby Dames about six months after Gremer. They were both working on basic skating skills at the time while other players scrimmaged and “rostered” to play actual games or bouts.

Henderson has played in several bouts since she began, but Gremer is still waiting on her chance. In April, she broke her ankle. The injury left her with a plate in her leg and seven screws. Last week was her first back on the track. She said she’s determined to get back to where she was before the accident.

But skating isn’t Gremer’s only derby responsibility. She’s also the president of the group. The role is very similar to the one Gremer plays in her professional life. She organizes practice times like she does student’s schedules.

It fits her personality, she said. Even if the dress code isn’t exactly the same.