Author of freshman reader shares experiences growing up as immigrant 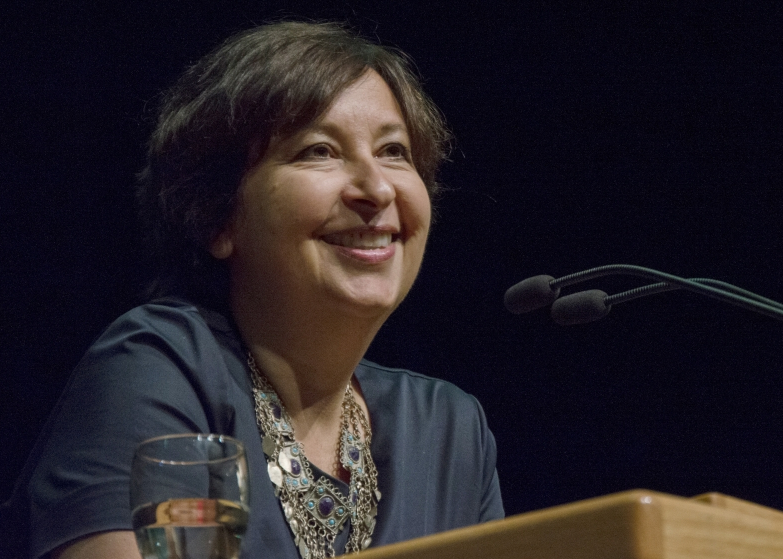 Adolescence can be hard, but Firoozeh Dumas, author of this year’s Freshman Common Reader “Funny in Farsi,” had to experience it as an Iranian immigrant growing up in America.

Dumas, who moved to California when she was 7, spoke about her book and answered questions Sept. 22 in John R. Emens Auditorium. She said she decided to write her book, which was published in 2003, to preserve her history.

“I wanted my children to know my stories,” Dumas said. “I thought, ‘Instead of telling my stories over and over again, why don’t I just write them down?’”

During her presentation, Dumas talked about her book and the stories she put into it. She said choosing pieces of her history to include wasn't hard, but like choosing treats. Dumas said it’s not the big events in life people remember — it’s the little ones.

“Every time I would write a story, it was like buying candy from a machine — … another one would pop up,” Dumas said.  “Eventually, I just knew I was done.”

Mitra Behforooz, a senior biology and pre-dental major, said she related to Dumas and her presentation. Behforooz is an Iranian immigrant who came to America when she was 18 years old, and still visits Iran once a year. She heard about the book from her younger brother, who read it for a middle school class.

“I read it, too, and I loved the whole book. … There was no one part I enjoyed more than another,” Behforooz said. “The whole book said to me, ‘I understand you.’”

Laura Wooten, a freshman theatre production and telecommunications major, said she was able to connect to Dumas’s experiences, even though she hasn’t personally experienced immigration.

“I lived in a small town where there wasn’t a lot of diversity,” Wooten said. “I have a friend who is Chinese, and Dumas’s book really helped me see the world from her perspective.”

Dumas said people shouldn’t avoid asking questions out of fear of being politically incorrect. However, she said it is important to be mindful of why you’re asking the question.

“There is nothing wrong with being curious and wondering,” Dumas said. “Just ask yourself, ‘Am I saying this to be mean?’”

Although Dumas’s book focuses on being Iranian, there was a universal truth she wanted to get across to her readers, that "Our commonalities outweigh our differences.”

She said everyone should introduce themselves to at least one new person each day, and she hopes her book encourages students to read and learn about new cultures.

“College is a time to branch out and meet new people,” Dumas said. “I believe everyone has a story to tell. ... Every person’s story counts."

By Hannah Amos and Sarah Olsen / 6 hours ago

On Thursday, Oct. 21, Susana Rivera-Mills, provost and executive vice president for academic affairs, delivered a lecture in the Teachers College titled “The Path to Peace and Social Justice.”

By Nate Grubb / 9 hours ago

Western Michigan was able to score two goals in the final 10 minutes of the first half to defeat Ball State 2-0.

Cooler Temperatures for this Weekend

By Ryan Crump / 9 hours ago

Weather Forecaster Ryan Crump has your update on cooler temperatures for your homecoming weekend and a wet start to next week.