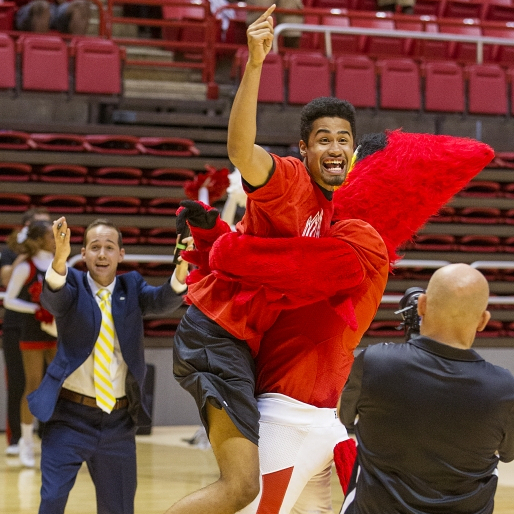 National media outlets including the New York Times and ESPN picked up on Turner's first shot, but he wasn’t receiving media requests from a certain talk show host. So he decided to send an email.

“I wrote into ['The Ellen DeGeneres Show'] and got invited to go on,” he said.

Turner, a freshman business major, packed his bags and flew to California for a two-day trip. His appearance on the Ellen Show premiered on Monday, Sept. 14.

DeGeneres gave Turner three chances to make a basket, and he needed every one.

“It was incredible … being on her set and seeing how everything happened, and just meeting Ellen DeGeneres herself was amazing,” Turner said. “It’s definitely in the top five best moments of my life.”

But Turner doesn’t credit the car, the tuition or the popularity as the best part of the whole experience, but rather, “being able to stay humble through it all," he said.

It helps that the media attention hasn’t been too intense.

“It’s been moderate, not too extreme,” Turner said. “I get a lot of offers for interviews and I’ve had to decline a few.”

As for everyday life, Turner has only noticed small changes.

“I get a lot more texts and get recognized on campus a lot more,” he said.

The attention has even extended to his family.

“They’re in awe,” Turner said. “They’re really supportive, and they believe in me.”

Leo Turner, Lemuel’s brother, is a junior in high school.

“A lot of people ask me about it around school,” Leo said. “Even people I don’t know come up to me to talk about it all.”

He said he and the rest of his family are proud of Lemuel.

“Out of everyone they know, I’m the last person they thought this would happen to,” Lemuel said.

But it did happen. And a semester of free tuition, several interviews and a new car later, his family and friends are determined to keep him grounded – even if that does include a bit of teasing.