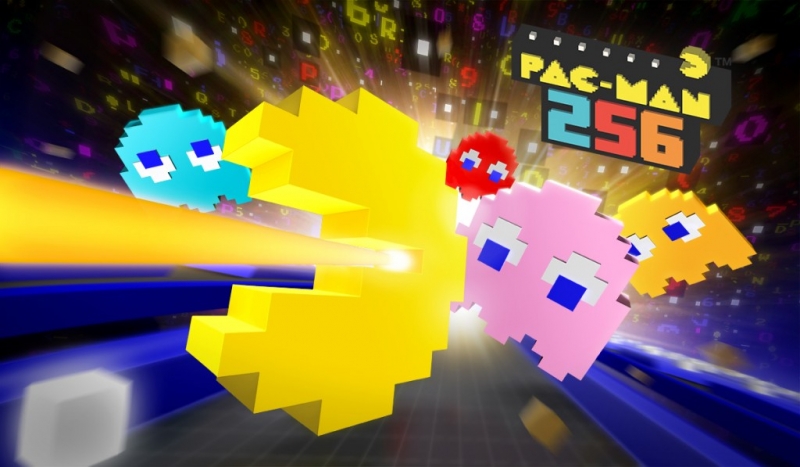 One of the best elements to Pac-Man 256 is how it blends new gameplay elements into the tried and true Pac-Man formula.

The most difficult obstacle for mobile games to overcome is the negative stereotypes that plague their respective genre. One can’t even refer to said games without the discussion of freemium business strategies and less than reputable marketing coming in to play. That isn’t to say mobile games have earned no respect, however. In the last few years we have seen triumphs like Monument Valley, Sword and Sorcery EP, and Threes challenge the typical idea of a mobile game to create something truly unique.

These games were all made by smaller studios whose successes are overshadowed by the EA’s and Square Enix’s of the world that still thrive on the freemium brand.

If there is one studio though that is melding the revolutionary ideas of the indie scene and the backing of a big budget brand it’s Hipster Whale. Coming off the success of last year's Crossy Roads, the studio is coming back this year with an inspired take on Pac-Man in Pac-Man 256. And while there are some bumps along the way, Pac-Man 256 is a bright sign for mobile gaming’s future.

One of the best elements to Pac-Man 256 is how it blends new gameplay elements into the tried and true Pac-Man formula. Like those games of old, Pac-Man must still venture through a maze as he collects power pellets and avoids the multitude of ghosts chasing him. But Hipster Whale has added two critical elements to the mix that shake up the standard gameplay.

The first of these being the power ups that Pac-Man can collect which range from lasers, bombs and even one that transform Pac-Man into a giant. Each of these is admittedly a little goofy (the first time I saw Pac-Man shoot a laser out of his mouth I audibly laughed) but they also serve a purpose in making the game more strategic then it has ever been before.

Having to decide to go out of the way and grab these power ups is of high risks but yields some of the most fun when you grab one moments before being gobbled by a ghost. Players are also given the ability to upgrade these powers with the coins they collect while playing which gives them higher damage or longer periods of use. Being able to pick and choose what I wanted to use and improve added to that heightened level of strategy.

The second element added takes a cue from Crossy Road and introduces a constantly scrolling screen to the mix. As players move up the maze, the bottom of the screen is constantly being destroyed by glitches which give the game a quicker pace and adds some beautiful design to the fairly typical levels. The only downside to this addition is that often it can feel like overkill. Having to dodge ghosts and the glitch all while navigating through the maze can cause an overload as to what to pay attention to.

When all the elements click though there is nothing like Pac-Man 256’s frantic speed and precision as you make your way to higher and higher scores.

While Pac-Man 256’s gameplay is refreshing, it’s Hipster Whales careful use of the freemium model that keeps the game from becoming another pay-to-win app. Every time the player loses a life they also lose a credit, which act like quarters in a arcade machine. Once the six allotted credits run out a timer will start and force the player to either wait or pay up to a few dollars for instant credits.

But taking a lesson from Crossy Roads again, Hipster Whale has given players plenty of chances to earn more credits as they play. The more time played in game will give players the opportunity to unlock chests that dispense credits. Throughout my hours of playtime with the game I only ran out of credits once and even then the timer was reasonable enough to where I didn’t feel the need to pay. The game also includes an “unlimited credits” option, which comes from a one-time payment of eight dollars, and is probably the best bet for serious players.

While the inclusion of the credits system does seem like a meaningless step back, it’s nice to see Hipster Whale give players chance to earn them without forcing payment. It would be good to see these types of money-sucking systems removed completely from mobile games, but as of now Pac-Man 256 has the best of a bad situation.

Pac-Man 256 is a game that paints a bright future for mobile gaming. While some of the genre’s tired tropes still find their way into the game, Hipster Whale has done a wonderful job in making the gameplay the focal point instead of microtransactions. Just like the arcade games of old, Pac-Man 256 demands your attention not by draining your wallet, but from the unfiltered fun it provides.

- Visual overload can cause confusion